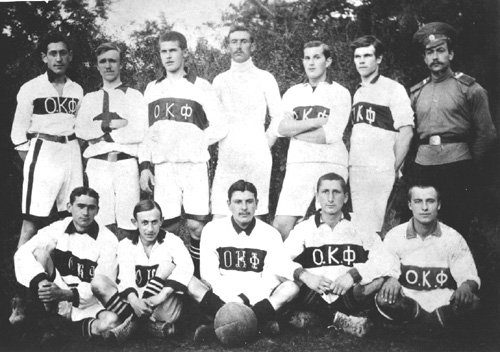 Ever since Tsarist times, Odessa has been famed as a capital of comedy, commerce, criminality and cosmopolitanism, but it is also the place where the noble sport of association football first took root in old empire. Football initially arrived in Odessa via the open seas. Unsurprisingly, the sport was first brought to the Black Sea port city by the British expatriate community, which made a habit of popularizing their pastimes across the world throughout the nineteenth century heyday of the British Empire.

The history of football in Odessa begins in 1878, with the establishment of the Odessa British Athletic Club. Victorian era Brits loved physical exertion and were responsible for creating and codifying many of today’s most popular sports including football, rugby, tennis, golf, cricket and boxing. The Odessa British Athletic Club engaged in many of these sports, but it was football that really caught the local imagination. At first, the Odessa British Athletic Club was a somewhat stuffy and aloof organization with a membership strictly limited to the thousands of Brits who were then resident in Odessa. Football matches would be held against visiting British teams, usually drawn from the crews of British ships docked in Odessa harbor. These games were played in the seafront area now occupied by the Shevchenko Park. The pitch they used was unconventional to say the least, with matches played in a giant man made basin excavated to form an exact replica of the Black Sea itself.

“At some point in time, the city fathers came up with the educational idea of acquainting locals with regional geography by building a small pond in the form of the Black Sea in Alexander Park. A vast pit was dug in the exact shape of the Black Sea, but that was to prove the end of this educational idea. The municipal budget, undermined by the abusive financial practices of the city mayor, proved insufficient to pay for the completion of the project. This miniature Black Sea was destined to remain forever dry.”

The first official references to Odessa football teams appear in 1907, when local schools began registering senior teams, many of which went on to become adult football clubs. A certain Mr. Peters, who was the English teacher at a local gymnasium, is on record as one of the leading lights behind the emergence of organized local club football in late nineteenth century Odessa. This growth soon led to the creation of a city championship. The Odessa Football League was established in the autumn of 1911, with Englishman Ernest Jacobs elected as the first chairman of the league.

As well as this organized league, non-league football also prospered in pre-WWI Odessa. Most teams were made up of players in their early teens, many of whom went on to become famous athletes in their own right. The teams they represented had exotic names like ‘Merlin’, ‘Shanghai’, ‘Tin Kettle’ and ‘Swiss Valley’. However, the most popular team was ‘Chernomorets’, which was drawn from players residing in the Primorsky region of the city. In order to enter the ranks of the Chernomorets players, a would-be member first had to pass a series of sporting challenges including football, fist fighting and diving – all overseen by ‘veteran’ players.

The Tsarist Empire held its first national championship in 1912, with the inaugural title going to the team from the capital city St. Petersburg. Odessa did not enter a team in the first season, but they joined the league in 1913 and shocked everyone by emerging as the unlikely champions! The title playoff took place in Odessa on 20 October, 1913. Odessa defeated reigning champions St. Petersburg 4-2 in a pulsating encounter with goals from Jacobs, Townsend and Bohemsky. However, the glory of this victory was to prove short-lived. Following complaints from the deposed champions, the Odessa club was disqualified for the ‘crime’ of fielding foreign players. Nevertheless, the prowess of the Odessa players had not gone unnoticed – hotshot striker Grygory Bohemsky was subsequently invited to join the fledgling national team, which had previously featured players drawn exclusively from Moscow and St. Petersburg.

FOOTBALL LOCATIONS IN TODAY’S ODESSA
Every citizen of Odessa knows where the contemporary football focus in the city is located – Chernomorets Stadium in Shevchenko Park, which serves as the home ground for the Ukrainian Premier League side of the same name. Knowledgeable fans will also point you in the direction of the university football pitch at Shampansky Pereulok, which once played host to many historically important matches in the city.