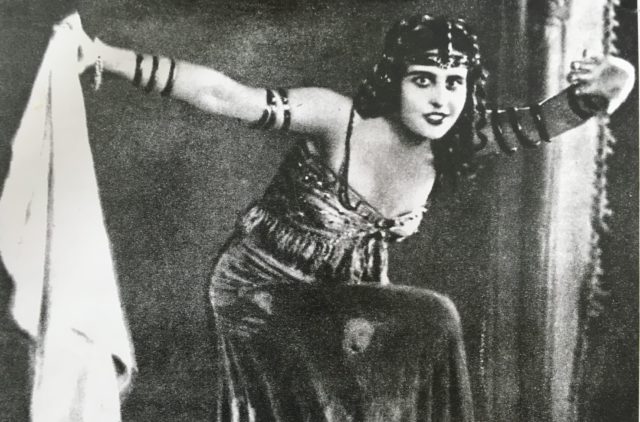 The early black and white film star’s tragic early death remains a major historical mystery. Can a new documentary film about the shadowy events surrounding her death also shine light on historical questions facing the post-Soviet world as it engages in decommunization?

Early February of 1919 found the attention of the entire cinematic world was fixated on the Popudov house on Sobornoya Square in Odessa. Despite the freezing cold and the constant dangers of the Civil War, the house was always surrounded by a huge crowd which would grasp frantically at every little bit of news from any person emerging from the front doors. This was an early glimpse of the film world’s cult of celebrity that would develop over the next century Inside, behind the windows, there lay dying a woman who had quickly become beloved by all of the Russian Empire. Vera Kholodnaya had spent barely five years in cinema. She was in the bloom of her youth and at the zenith of her fame, and surrounded by adoration. Yet, now the Russian “empress of the silver screen” lay on her deathbed. All of Odessa lined up to see her off on her final path and the crowds that followed the coffin on the icy February day would swell into the thousands. The Funeral of Vera Koholodnaya became her final starring role – a film from which only a few fragments remain intact today. Vera Kholodnaya was truly the first star of Russian silent cinema. Her fame crossed the threshold of two centuries. For an entire generation, her name became synonymous with fame, feminine beauty, and talent.

The shock of her death was overwhelming. Many refused to believe that the cause of the actress’s death was the “Spanish flu”, a horrible strain of the common illness which took the lives of millions all over the world that winter. By word of mouth, a vicious rumor began to spread – “Vera was poisoned! She was murdered!” People sought a fittingly melodramatic end for the tragic heroine. After all, all her best films ended with death. The entire city knew that Vera was starring in Lady with Camelias, where the heroine’s death is foretold by the fatalistic plot. However, the official cause of her death has never been challenged or convincingly disproven – she died of the flu as far as we know.

So, while we could close the case at that, it must be admitted, something still seems off, somehow wrong with such a prosaic end to the actress’s life. And so, let us examine the circumstances…

The year is 1918. The young Soviet Socialist republic is awash in the blood spilled by the civil war. In December, war ships of the Entente lead by France land in Odessa with the aim of occupying the city. At the same time, a group of actors is able to escape Red Moscow and make it to independent Odessa and continue their work. Among them are the biggest names in Russian cinema at the time – Kholodnaya, Runich, Maximov, Polonsky. A group of professional Communist provocateurs was sent into Ukraine at the same time – among them a young Chekist by the name of Lafarre.

On Felix Dzerzhinsky’s personal orders, Lafarre’s secret mission was to see if there was a possibility for a non-military end to the Entente’s intervention, and to determine the strategic aims of the Entente in Ukraine. He was to accomplish this by infiltrating the headquarters of the French command in Odessa. The film studio “Mirograph”, where the above mentioned actors worked, was to serve as the communication channel between the infiltrator and the Red command.

Meanwhile, the cast and crew at “Mirograph”, hard at work on several films that stared Kholodnaya, wanted for nothing due to the patronage of the commander of the French army in Odessa – Colonel Freidenberg, who was naturally head over heels in love with the silent film star. The actor Petr Instarov (codenamed “The Apostle”) and Lafarre suggested that Kholodnaya could gain influence over Freidenberg, who was also head of the occupational army headquarters in the south of the Russian Empire, in order to convert him to their side. The ultimate aim of such a seduction would be the conclusion of the French occupation. Her co-stars finally managed to convince her that the role of “Red Judith” would be the most important one of her life. On January 27th, 1919, Lafarre’s report on Kholodnaya left for Moscow with a courier:

“The Lady is somewhat infantile, but responsive and kind – in our opinion, she is absolutely necessary. What’s more, fame has not gone to her head. In fact, it seems to somewhat burden her. Freidenberg adores her, he wants to spend every moment with her – although he is able to contain himself. Our Lady’s influence over Freidenberg is truly infinite. The Apostle suggests that we hasten the plan in this regard.”

Unfortunately, the reports were intercepted by Vasily Shulgin’s White Guard counter-espionage squad. This interception became fatal to the entire reconnaissance mission. Vera Kholodnaya died suddenly on February 16th, 1919. According to the official version, Vera Kholodnaya died a quick death due to the Spanish flu. However, the last recorded case of a death due to this strain in Odessa had happened in October of 1918 – five months before the actress’s death. According to the most popular alternative explanation, she was poisoned by the General Anton Denikin counter-espionage squad due to her Communist sympathies and her enormous influence over the “French Odessan” Colonel. There is some evidence to support this version, namely a telegrammed report from Shulgin to the Denikin HQ: “Killed the Red Queen.” However, the enamored French Colonel served the Red Army faithfully, even after Vera Kholodnaya’s death. On April 3rd, 1919 Freidenberg gave the order to evacuate the entire expeditionary corps from Odessa. The order was completely unexpected and shocked both Denikin’s men and the Entente command. On April 19th, the French Prime Minister Georges Clemenceau sent materials regarding Colonel Freidenberg to the High Military Court, but, as they say, the deed was already done. The White Guard, deprived of a dependable rear, was soon backed into Crimea and from there, into the sea.

In further evidence of the White Guard’s involvement in her death, after her death, Kholodnaya’s young children were brought overseas where they faced ceaseless persecution from White Army-sympathizing expatriate media and social organizations. The cruel persecution reached such proportions that by May 1925 the Soviet press was actively discussing the necessity of “repatriating Vera Kholodnaya’s children in the interests of their own safety.”

As the 100th anniversary of the October revolution looms over us, a group of researchers has joined forces in order to finally close the cold case of Kholodnaya’s death and put an end to the unyielding question: did Kholodnaya succumb to a global epidemic, or was her death a political murder?

Many of Kholodnaya’s biographers have stressed that the causes of her death are, as of yet, not totally clear. To this day, historians, biographers and even criminologists remain mystified by the romantic and tragic case. I certainly hope that by publishing this article, I will help attract the attention of European historians and specialists who could assist us in shedding light on these historical enigmas. It is my hope that we can film the proceedings and keep track of events as they occur. The international group of experts investigating Kholodnaya’s death has taken the following historical sequence of events, which has been sketched out above, as the basis of their research.

After the Revolution, the supporters of the dying Russian Empire flocked to Odessa. It is there where the final stand-off between the Bolsheviks and the White Guard will take place. At the end of 1918, Entente armies headed by Colonel Freidenberg arrive in Odessa to assist the White general Denikin. Throughout these fateful days, the filming of an epic love story with the beautiful Kholodnaya in the starring role is taking place in the city. Unbeknownst to the actress, she will play her final fateful role in the ultimate downfall of the Russian Empire. The young Red anarchist Lafarre serves as the orchestrator of these momentous events.

This official version of events could very well be the authoritative and final one, if not for the efforts of a group of young researchers who, in our day, is trying to locate Kholodnaya’s grave – it has seemingly been wiped off the face of the earth in 1932. A small poster hanging on the walls of their base of operations, the actress’ portrait captioned with the plea “Find me. Vera.” serves as the modest but powerful motivation for their work.

Each of the experts working on this project has their own motivation to continue investigating Kholodnaya’s life and death. But there is one overarching desire uniting them: a certainty needs to be brought to the conclusion of her life story. We should no longer be satisfied to simply read that “the circumstances of Vera Kholodnaya’s death have not been completely determined to this day.” The project will draw on declassified archives, artifacts and documents which were thought to have been long lost, and are newly re-discovered in laboratory findings. A century since the event, Kholodnaya’s murderers will be named…and she, herself will speak again from the screen in her own voice.

However, we have no way of foreseeing what the results of this investigation will be, because it will take place in real time – during the filming itself. We will try to trace Kholodnaya’s path in the crucial espionage mission of the 20th century, one which tipped the balance decidedly in favor of the Bolsheviks; and at the same time attempt to make sense of the Revolution and the grand-scale social experiment in establishing a utopia on earth that followed.

The October revolution was a point of no return, a point in time at which all remnants of the old world crumbled and a new radical culture attempted to take root among the ruins. However, the revolution did not happen in a moment. The realization that the old world is hopelessly gone with no chance for a return took time to establish itself in peoples’ minds. Many artists especially would quickly realize that the Red dictatorship was not merely an ideological accessory to flirt with, but a fatal commitment which would bring grave consequences.

The extreme situations faced by the players in this real-life tragedy – Kholodnaya, Freidenberg, and others give us an opportunity not only to describe the historical events surrounding the fall of “Imperialism” under the revolutionary attack; but also to explore the deeply human themes surrounding the catastrophic event. What is worth more – a human life or the bringing to life of an ideal? How justified are human sacrifices made to a fanatical system of beliefs? What is more important – the individual or the nation? How much blood can be spilled in the name of an idea – is it worth the lives of those who die to defend it?

The intellectual civil war is not yet over. The struggle of ideas – and the struggle between real people willing to die for them – continues to this day on the territories which once constituted the Russian empire. A century later the cinema still remains one of the most important art forms – and as such, one of the strongest ways of disseminating ideas. The problems which concerned the heroes of our historical drama remain as relevant today as they have ever been. Learning the truth of Kholodnaya’s fate is a key to that drama.

Mila Kudryashova is a screen-writer and filmmaker who lives in St. Petersburg.