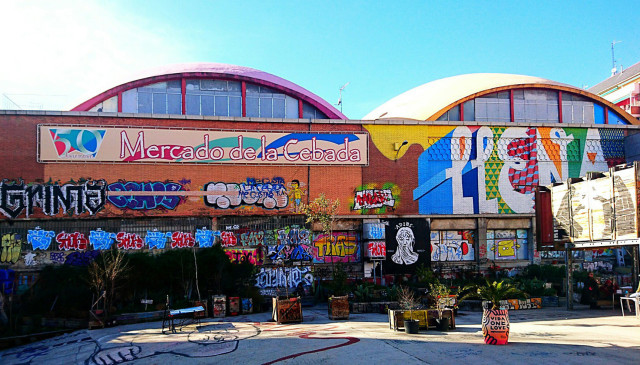 To discover Madrid through the prism of its social initiatives and to obtain a much deeper understanding of its dynamics and culture, its social ties and influences — these were the goals of an urbanist expedition, undertaken by social innovators from different cities of Ukraine this winter. The trip was organized by Impact Hub Odessa and carried out with the support of «Renaissance» International Foundation.

The first acquaintance with the city took place at Impact Hub Madrid, a partner co-working space that hosted the Ukrainian delegation of urbanists. The group was joined by local activists and architecture lecturers together with their students, as well as representatives of the municipality. Together, these organizations are changing the public spaces of Madrid by implementing changes in the public budget to enhance the activity of the Spanish capital’s residents. Similar processes are currently taking place in Ukraine: universities are becoming actively involved in public life to influence the implementation of public city budgets. And the core problem is the same — the low initiative of ordinary citizens.

As we toured the city, we were introduced to a number of successfully implemented projects.
The Esta es una plaza organization helps to build and strengthen community relationships, while developing urban spaces. The residents themselves help create urban gardens: green oases in the midst of the bustling city, establishing a common area for recreation, communication and cooperation. The Cuidades Comgosto initiative proposes a philosophy of modern art as a doorway to social interaction. Art doesn’t only belong in a gallery —activists brought it to the street, adapting the city environment for artistic experimentation. Passersby could take pictures with the works of contemporary artists, and the wishes written on the metal fence separating a construction area from the street were a kind of unexpected emotional gift from the city to its people. Creative ideas like the urban gardens and the interactive street art can and should be adopted everywhere — they ignite the imagination and change the attitudes of ordinary people, who might not be regulars at expensive botanic parks or museums.

The Lavapiés neighborhood of Madrid has become one of the must-see places for fans of contemporary art and urban planning. This area is a vivid example of the process of gentrification — the rising prestige of previously unfashionable districts of the city. Our first impression: a large gallery open to all passersby, with works of modern artists adorning the concrete fence of an abandoned tobacco factory. In such places you just want to slow down and take in every creation. At the gate of the factory, we met two girls from the LaLiminal organization. They showed us a way to look at urban landscape formation through the prism of the history of local people.

Lavapiés saw the beginning of the movement for better labor conditions, characterized by strikes and initiatives started by women workers. Their influence led to the formation of a network of schools, kindergartens, and parks around the factory, because organized childcare was necessary to free up labor for cigarette production. The factory is also the reason for the building of low-cost housing in the area, some of which is still preserved but somewhat renovated to give the residents a bit more personal space from neighbors. Today, the social interaction of residents can move to the streets, the courtyards and small cozy plazas. It’s interesting that the city government invited LaLiminal, a small civic organization, to conduct tours of the neighborhood. As it turns out, the city doesn’t need to engage in myth-making for tourist attraction, as often happens in Ukrainian cities. If stories about ordinary people and their lives are gathered from the archives, urban history will present itself in vivid relief without any fictional inventions.

Another place with a rich socio-political history is a roofed market that became one of the social hubs of the district. The manager of the market shared its story with us. He himself used to work as an engineer in a company, but lost his job in the crisis and had to find ways to survive along with hundreds of his colleagues. Working at the market helped them make ends meet. Eventually the traders established an association and rented the market from the city for a small sum of money. With the advent of large supermarkets, where food is much cheaper, the open market began to struggle. The trader association adapted to the challenges, though, transforming the market from just a place to buy food on the way home, into a space for interaction, and recreation. You can relax with a glass of local wine, sample local flavors and have lunch in the candid, open atmosphere of Madrid. Here you can find hand-made goods, fruit, seafood, books sold by weight, street shops, food courts — no wonder that this unusual combination and variety attracts locals and tourists. In general, Madrid demonstrates that so-called “third places” — spaces that are neither work nor home, but serve as a venue for collaboration, communication, idea sharing and creativity — are gaining popularity. These trends are echoed in Ukraine: Urban Space in Ivano-Frankivsk and Impact Hub in Odessa are great examples. However, “third places” in Madrid are maintained at the municipal level, because it is well understood that they contribute to city development and better resident integration.

At the end of the day, a small neighborhood organization Elsol de la Conce invited us to an ecological food fair which allows for the support of local farmers. We entered a building off a cozy little street, and saw a small office crowded by fruit sellers and local residents. We imagined this fair a bit differently, but soon gained a deeper understanding of its scale. Roberto Lopez, the head of this organization, told us about activists of the 15M movement who began to unite residents into friendly neighborhoods, encouraging them to become active and take responsibility for their city environment. The initiatives are small affairs, without unnecessary pathos: picnics for neighbors, weekend bicycle trips, reading clubs, community yard cleanings. First, a few families began to take these simple steps — and now more than 250 residents of the neighborhood have joined the association. The modest office in a former vegetable store opens only after the end of the workday — the organization has no permanent staff and is limited in funds. The resident interaction is fueled only by their energy and enthusiasm. “Do not try to change everything at once. Make small steps, create interaction between people slowly and quietly, create a sincere environment — and then you change the world!” Good advice, isn’t it?

Impact Hub Odessa is a multifaceted cultural and co-working space in Odessa.