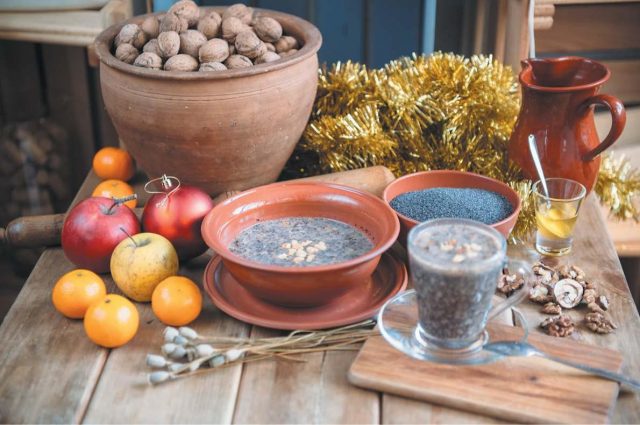 What is the first thing you need to know about the Christmas feast in Bessarabia? Despite the region’s multiculturalism, Bessarabian Christmas is mostly an Orthodox holiday. The main ethnic groups — Ukrainians, Moldovans, Bulgarians, even Gagauz (a Turkish speaking people) and Gypsies — belong to somewhat different churches, but they are all Christian Orthodox. This not only brings the community together, but gives Orthodox traditions a very strong influence in the region. For this reason, other Christians (Catholics, Lutherans, Baptists) and even non-Christian residents of the area tend to eat the same dishes during the holidays.

Christmas is preceded by Svyatiy Vechir — Holy Eve (Sochelnik for the Russians, Bdni Evening for Bulgarians). The Christmas fast ends on this day, so only Lenten foods are served. The number of dishes is significant: the Ukrainians have 12 dishes symbolizing the 12 apostles, the Moldovans — 7 dishes, and the Bulgarians — 9 dishes to honor the number of months of pregnancy of the Virgin Mary.

Each culture has its own set of foods that are traditionally cooked on this day, but “kutia” and “uzvar” are common to all of them. Kutia is a special Christmas dish made from boiled wheat grains, covered with a mixture of ground poppy, walnuts and honey. Sometimes raisins and candied fruit are also added.

Kutia is most common among Ukrainians and Moldovans, but it is the dish that, along with uzvar (a drink made from dried fruit), has spread among all the peoples of the region. The exact origin of kutia is unknown, but most likely it came here from Byzantium together with the adoption of Christianity. Proof of this can be found in the existence of this dish as a dessert in the cuisine of old Istanbul.

Kutia is the main symbol of Ukrainian Christmas. It is not only made at home, but is also served in many restaurants.

The Gagauz bake special large breads in the oven. Also, they have a very curious custom — breaking the fast on Christmas morning with sparrow meat! Sparrows are served fried. According to popular belief, eating animal meat immediately after fasting is harmful, so one must begin with poultry. Historians believe that the cult of the sparrow in Gagauz culture is a remnant of an ancient Indo-European cult of this bird — which is a symbol of fertility.

An interesting culinary feature common to all peoples of the region is the extensive use of smoked meats and sausages prepared especially for Christmas. The custom of bestowing meats on Christmas is widely practiced among the Gagauz and the Bulgarians. For example, the Gagauz hang a piece of smoked meat in front of the front door. It is meant as a gift for the “kolyadniki” (carolers) — guests who come to the house with wishes of peace and fortune, performing Christmas carols (“kolyadki”).

Dmytro Sikorsky is a restaurateur, scholar and historian of the Odessa and Bessarabia regions.

James Kirchik Answers 4 Questions About “The End of Europe”