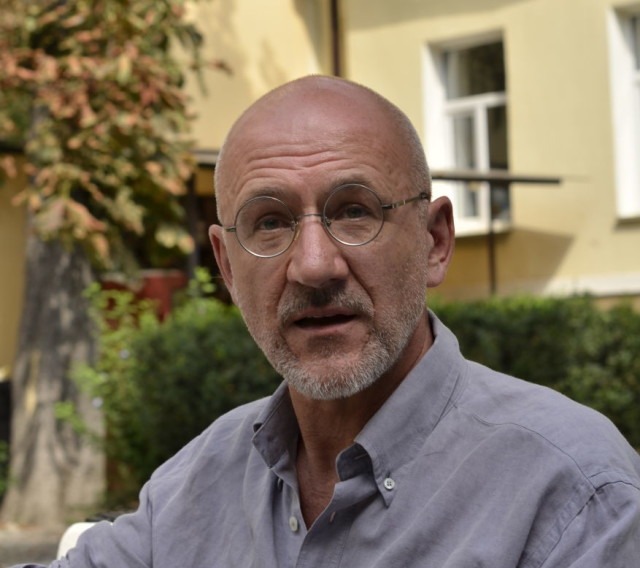 The notorious Moscow performance artist turned Buddhist returned to Odessa for a provocative and charming talk.

Oleg Kulik is a citizen of the Russian Federation with Kyiv roots. Though he has lived in Moscow for almost twenty years Kulik is connected to our fine city in more ways than one might initially think: first and foremost, through his collaborations with Odessa artists. He has not only promoted and exhibited their work in Moscow by inviting them to participate in his projects, but has also spent a great deal of time in the city (including his vacationing in the Kinburn Spit) and assisted in the creation of the “Art Raiders” project that took place last year at the Starokonny Market. Before giving his lecture as part of the “FreierFest” festival, he showed his Odessa art world ease by greeting audience members Leonid Wojcekhov, Sergey Anufriev, Dmitry Dulfan, Igor Gusev, Lesia Verba; he also mentioned Igor Chatskin. To art world insiders, the whole talk felt like a family reunion.

For myself, I was entrusted with interviewing Kulik for this magazine. However, while I was preparing, I began to become more and more nervous. I wondered which aspect of Kulik I would encounter – the persona of the well-known artist? The radical Actionist and former “dog man”? As it turns out, Kulik has another facet – an amicable, pleasant, approachable person. My worries about meeting him were in vain. I joined him for breakfast in the courtyard of the “Odessa Dvorik” hotel and we shared a wholesome, hearty meal. Our meeting almost reminded me of “Breakfast at Tiffany’s.”

Oleg claims that the purpose of his life is “to break away from the herd, to find meaning, understand yourself.” As well as to reach a deeper understanding of life and to “…accept life, to rise above the self and circumstances.” The first statement is not outside the realm of artist thinking, it conveys the definite understanding of individualistic destiny germane to all artists everywhere. However, if the second sounds reminiscent of a Buddhist maxim, one will not be surprised to learn that Oleg has spent seven years learning and meditating in Inner Mongolia and Tibet.

Up until recently, Kulik has been known as a “right radical” author in Moscow society, connected tangentially with the group “Voina,” “Pussy Riot” as well as to the controversial Russian conceptual artist Petr Pavlensky. In conversation, the artist came off exponentially more like a Buddhist than a radical: “One needs to be careful when searching for a primal source of ethics or morality, because then one’s aggression can turn inwards. Then [during my performance art phase], I did not feel any sort of triumph. The conflict deepens, aggression cannot stand any humor, any self-irony — everything becomes cyclical.” Now, his mannerisms and movements show a measure of elegance and his tone of voice betrays some gentleness, which lends credence to his self-reported joy in raising his child — something he now sees as his main calling in life, a “truth” that was revealed to him during time spent in an ashram.

Kulik also comments on the cultural changes and contrasts that he had noticed in Odessa: “I have many relatives here, maybe fifty people. They all used to be quite serious, repressed — this is one of the reasons I left, really. Now they have all become spirited people, wearing vyshivankas, some even brought tea to the Maidan protesters!” He seems to sense a special kind of vitality and freedom, too, comparing Odessa to other places he knows well: “I once flew from Moscow to Odessa, transferring in Minsk. Driving through Moscow early in the morning, it’s all clean and plastic, sterile, futuristic — it looks like Fritz Lang’s “Metropolis.” Then I spent three hours in Minsk, wandering through the city. It was like taking a trip to the past, back to the USSR: everything is grey, clean enough, but bleak. And then, suddenly there’s Odessa: the buildings are in ruin, but the architecture is old-world, unique; there’s fruits and vegetables everywhere, things are “alive.” People walk around dressed however they want. The first store I went to, the saleswoman cursed me out, but with what character — “Now I’m going to show you AND tell you!” — and she did! Think about that contrast. It shows a lot.”

Speaking of vitality, I asked Kulik, who became famous for behaving like a dog chained up in a Chelsea art gallery if he sees himself as an animal in some way, and how strong is the animal aspect of humanity, especially in a place where war is raging and violence has a special significance. He revealed that “the dog idea did not come about accidentally. I’m partial to the fate of dogs in our part of the world. I think it is useful to visit zoos, they are a litmus test for a society’s views on everything, including people. Amusement parks are also revealing about human nature. Europe has excellent zoos, but the amusement parks are often boring, just so-so. Here, in Odessa, we have a wonderful one right by Shevchenko Park.”

Kulik continues working with corporeality in the form of small sculptures in nanoplastic: when he sculpts, he feels like he imprints his entire emotional state, his entity into the object: sadness, hope and sometimes happiness. At the moment, he describes his feelings as rather clear and balanced: “Obviously, I am against war, but right now I feel like it would go against the nature of being a real artist to get enmeshed in this situation. While in Tibet, I received a clear message as to what was my current purpose should be and I am fulfilling it. It’s pure joy — raising your own child. I consider it my sacred mission. Although in general I am against artists who consider themselves “missionaries,” who take themselves too seriously, make official statements, hold actions. I don’t believe in this separation between “us” and “them,” like we had in the 90’s.”

Some of Kulik’s statements can be somewhat off-putting however, such as when he says “I am above science, I have no attachments…” It is unclear how such a statement should be interpreted – is he above physical constraints? Or above ethics and clearly demarcated moral values? Still, Kulik’s intelligence is not to be doubted. He is eloquent, but can also convey his ideas in accessible forms — the audience of his lecture at the Green Theater was thoroughly charmed. I was impressed by Kulik’s manner of brushing off those who came forth with stupid or provocative questions (something I plan to adopt for my myself). Although a certain sense of imperial pomposity of “the great artist coming from Moscow itself to lecture in the small province” lingered, the importance of Kulik’s lecture to Odessa was clear – and for this, I would like to thank him.