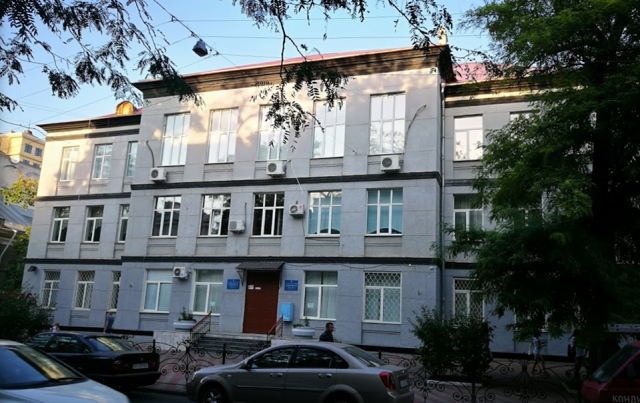 School No. 9 opened up in the very center of Odessa, on Gavannaya Street in 1957. Today, the school is known as Gymnasium No. 2, and is known for teaching every subject in the Ukrainian language. The school quickly gained popularity among Odessans, and for 60 years now, pupils from all over the city, as well as from neighboring suburbs, have been studying here. So why is this educational institution historically associated with the study of the Ukrainian language so popular in Odessa? Sergey Vegerychuk, the headmaster of the gymnasium, spoke to us about his remarkable institution.

From the very beginning of our existence, the school taught in Ukrainian. A year after it was founded it became the city school with the advanced English language courses. I think that in the beginning teaching all the subjects in the Ukrainian language was not enough, so to attract good students it was decided to also make it into a place for the intensive study of English. Later still it was decided to teach a number of subjects in English. But I think that for the highest level of education it is necessary to add to the mixture the attitude of the pupils themselves to their studies. The systematic training of students for classes is very important. Most importantly, this school formed in them deep knowledge, intelligence, humanity and the ability to break through and to achieve. I always say that the most important aspect of that process in this school, including during Soviet era, was English, because the study of English is part and parcel of progress.

After the fall of the Iron Curtain, when Mikhail Gorbachev and Ronald Reagan signed a number of agreements in Reykjavik, our school received support at the state level and some of our students had the opportunity to go to the United States of America in an exchange. It was very important, because the guys got to live in families and had a chance to communicate. They saw very different pedagogical techniques and approaches to education.

The task that faces us today is not only to give a good education, but, as we say, to be competitive. After graduating, the student must be able to find a place of employment and be able to keep it. So the child must be able to make decisions and defend those decisions. It is very very important for graduates. There are many of them and they have dispersed all over the world.

Right now, at the 60th anniversary meetings, we gather everyone from everywhere. There are people returning from America, Canada, practically every state in Europe. We even have graduates living in faraway Australia.

In order to enter our school, the ministry has developed a comprehensive set of examinations and all the children are interviewed. Basically, these sessions involve psychology and they are different. But this is a very difficult choice, because there are parents who have a second and a third child, and they all want to go to our school. Again, we see the children of graduates being enrolled in our school.

Absolutely new technologies and pedagogical techniques have been developed to make studying interesting and easy for children to learn complex material. We always encourage those who have solved a difficult problem. It is important that there are results.

We also adopted early on the rule that a teacher should address a student by his name, rather than the family name. Not Ivanov, Petrov, Sidorov. Therefore it is very important that Kolya, Yura, Vanya, Olechka, Lyuda come out. I often do not know who is there but it certainly is not Ivanov, Petrov, or Sidorov. This also unites the teacher and the pupil and it is very important. I’m proud of that decision, because it also furthers along the process of education. I have the belief that you have to make children fall in love with you and this encourages them to study. We show them by example that it is prestigious to study. Knowledge opens many horizons.