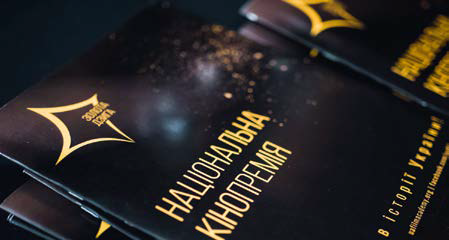 For the second years in a row, the Golden Dziga will be presented to the best Ukrainian films in 18 categories. Nominations for the prize by the Ukrainian national film academy were announced on January 22th 2018.

The Ukrainian film of the previous year that leads for the number of nominations is Arkadii Nepytaliuk’s “The Strayed” with 11 nominations. It is closely followed by Ahtem Seitalbayev’s war saga “Cyborgs” — 9 nominations. Marina Stepanska’s “Falling” has 7 nominations and Valentyn Vasyanovych’s “Black Level” is up for 6 nominations.

We’ll start with the popular feature “Cyborgs” which was directed by Ahtem Seitalbayev, a patriotic war film chronicling the fate of six soldiers fighting to defend the Donetsk airport from Russian soldiers and separatists. The film was shot with the support of the State Agency of Ukraine for Film Industry and achieved the highest audience ratings per any Ukrainian features, the film has also set all sorts of national profit records. It represents an innovation in Ukrainian cinema in that Ukraine now makes patriotic war films. But the film was met with mixed reactions from film-critics as the movie has produced contradictory feelings in many of them. Ironically, this feature depicting a defensive war for freedom from external invasion, brought the whole nation into a debate concerning to what extent patriotism should be controlled by the state. Many critics worried about the possible effects of jingoism in the national cinema. “Cyborgs” was the official submission of the Ukrainian Oscar Committee for the Best Foreign-Language Film category at the 2018 Academy Awards, but the film was not chosen for the nomination by the Academy. At the National Film Awards the feature film stands a good chance at winning the Best Picture, as well prizes for Cinematography, Best Screenwriter, and Lead and Supporting Actor awards.

Another feature about post-revolutionary Ukraine is “Falling” — the debut picture of Marina Stepanska. The young director offers a fragile love story as a vehicle for a universal search for individual identity. The interesting fact is that Marina Stepanska is not up for the Best Director nomination, but the feature has every chances to get the 2018 Golden Dziga for Best Picture and Lead Actress for Daria Plahiy. Notably, Marina Stepanska auteur film captures the relaxed and sociable atmosphere of Kyiv’s youth. Watching the film, one almost has the feeling of stepping out the door and straight into a movie. The film benefits from strong dialogues and performances of non-professional actors. At first sight, it seems that the director was unsure how to end the picture, so the film loses some energy and audience interest towards its finale. However, if the film’s denouement feels false or absurd, it is in fact based on a true story. “Falling”, was likewise shot with the support of the Ukrainian State Agency for Film. It won the Audience Choice Award at the Premiers Plans d’Angers festival in France.

Independent cinema in Ukraine is far from being the next Romanian New Wave, yet it has surely and unmistakably been evolving over the last half decade. Despite that, the indy feature “Black Level”, directed by Valentyn Vasyanovych, placed fourth by the number of nominations. “Black Level” is an exercise in improvisational technique, the film having been shot without a script. It is therefore surprising that Vasyanovych took the nomination for Best Screenwriter. Moreover, Vasyanovych was both director and cameraman for “Black Level”, and so he is represented among Best Director and Cinematography nominations. He and his actors —Kateryna Molchanova and Konstantin Mohnach — are the only three people who worked on the film. The film focuses on a 50-year-old wedding photographer Kostya whose life is going nowhere. When it seems that death is quickly approaching the main character through his dreary daily routine, the director gives us some hope for salvation. “Black Level” won Grand Prix of The Festival International de Films de Fribourg (FIFF), which took place in Switzerland and the international federation of film critics — FIPRESCI Awards at the 2017 Odessa International Film Festival.

The leader for the number of nominations and the unlikeliest contender for the 2018 Golden Dziga for Best Picture is “The Strayed” by Arkadii Nepytaliuk. The feature offers a fresh and funny view on rural life and women’s participation in every decision of rural life. Despite the fact that the most heroic and wise and even the most villainous characters are all female — Alena Uzluk and Nina Naboka are nominated for Lead and Supporting Actress — Dmitriy Khomyak is such a colorful character that he will likely bring home the award for Lead Actor. Arkadii Nepytaliuk’s leading rival for Best Director is Ukraine’s legendary Sergei Loznitsa with his feature “A Gentle Creature”. The picture was chosen for the Palme d’Or in the main competition section at the 2017 Cannes Film Festival. The film was inspired by Fyodor Dostoyevsky’s eponymous short story. It also earned Loznitsa a nomination for Best Screenwriter. His main competitor in that category is Nataliya Vorozhbit for script of the film “Cyborgs”.

Finally, we want to identify other favorites to win: “Dixie Land” directed by Roman Bondarchuk — is the leader in the nomination for Best Documentary. The feature is about a children’s orchestra from Kherson, Ukraine. The work is so good that makes it clear that the future of Ukrainian cinema belongs to documentary features. Honestly, “Dixie Land” is the kind of powerful film that needs no introduction — it demands to be seen. The leader in the nomination Best Short is the sensitive and poetic “Lilac”, which was directed by Kateryna Gornostai and stars Irina Vasilenko, Alina Sugoniako, Lina Romanuha, Viktoria Myroniuk and the ever present Molchanova.