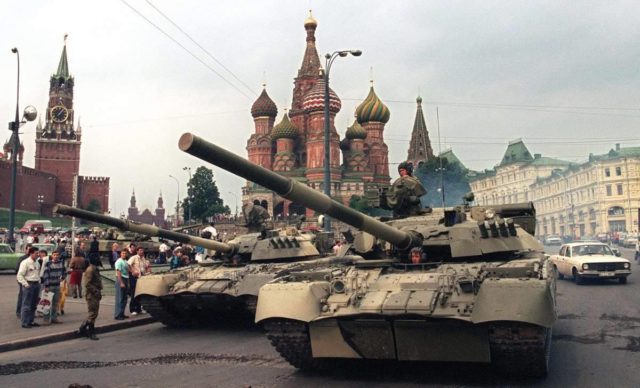 The Odessa Review’s three Soviet born senior editors were all children when the failed August coup against the Soviet Union took place. The breaking of the coup by Gorbachev and Yeltsin and the general refusal of the army to shoot into the crowds which had formed around parliament signaled the beginning of the final dissolution of Soviet Union. Here are their memories of where they were when the tanks rolled through the streets of Moscow and martial law was declared.

On August 19th of 1991 I was with my mother in Riga. It so happens that my mother is a graduate of the Riga Civil Aviation Engineers Institute. We had gone to visit her friends and while we were there, to buy some deficit merchandise that was missing from Odessa’s stores, since the Black Sea port was not a capital of a Soviet Republic (capitals had access to better goods in a system based on rations).

I vividly remember the adults speaking about the current events in a spacious kitchen in the heart of old Riga. Our hosts’ older son and I would go out to eat the most delicious ice cream in a large town square where people were gathering together with posters in Latvian. There were a lot of journalists. There was the adult’s incomprehension of the situation, which was keenly felt by the children. And of course, there was nothing but ballet playing on television. And also, my mother could not give an answer to my question of when we were returning home, which made me as a child very happy. Because the very delicious ice cream and Riga’s western architecture with signs in a language that I couldn’t understand gave me a feeling of being abroad, somewhere magical.

When we did return home, a great deal had changed for my parents, but only one thing had changed for me. In school, Ukrainian became not just one subject, but the language in which all subjects were taught.

For me, the summer of 1991 was an ordinary and quiet one in the town where I grew up: Ilyichevsk then, Chernomorsk now – its very recent name change just one of the million long echoes of the events that took place that August. Whether it was because my family was not political, or because I was a sheltered child always immersed in my reading, but I was unaware of the turbulent events.

Perhaps it was difficult even for adults to comprehend the magnitude and the implications of the situation. In the end of August my parents happened to be on a Mediterranean cruise and on the 19th the ship was docked in Italy. As soon as the Moscow news broke, the Italian port authorities contacted the liner and offered to grant everyone on board refugee status. Not one person took advantage of this. Many, like my parents, could not leave family members behind. Most probably believed that the gravity of the news was exaggerated. Almost certainly no one had the presence of mind to look ahead to the opportunities this situation could present for them and their families.

I left Ukraine for the United States almost exactly one year later, in the summer of 1992. My parents did not disembark in Italy the previous August, but my family’s emigration journey must have been in the stars after all.

In August of 1991, my sister and I were living with my grandmother in Moscow. We were waiting to join my parents in America. As it happened, the 18th of August was the day that we were due to emigrate to America a year after our parents had gone off to test the waters of emigration. We had spent months preparing to emigrate. It was not apparent if the newly open door to the West would stay open or would suddenly shut tight for another ten years, as had happened during previous thaws. So our parents knew that we had to go as soon as possible and chose this opportunity.

My aunt had taken us to the Sheremetyevo airport by taxi around midday, and the tanks were already rolling through the streets. We were getting on the last flight out of the Soviet Union to New York City as ‘The State Committee on the State of Emergency’ was being declared by the leaders of the coup. When we landed at John F. Kennedy airport in New York City we were greeted on the tarmac by television cameras and journalists demanding news of what was happening in Mosocow. The unsuccessful coup would last three days, and it would be a week before my ancestral Ukraine would declare independence from the Soviet Union.

Fryday W on the topic of Maritime Business: Hot Spots.