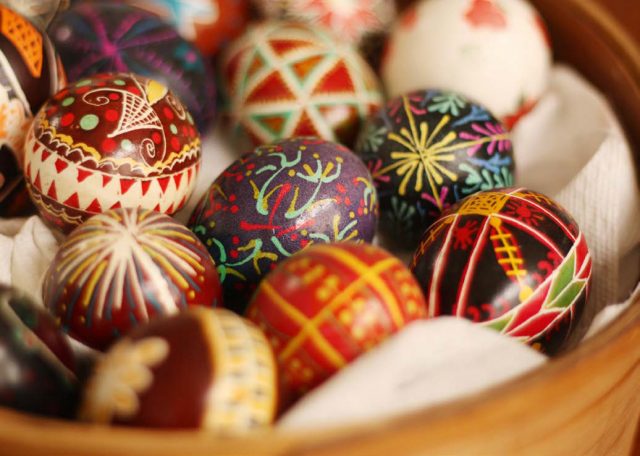 Every spring, when the first truly sunny days come to Bessarabia, nearly every household in the region takes part in a baking and cooking competition. Ancient recipes are brought out of old notebooks and the market price for eggs usually rises dramatically as everybody waits to celebrate the Easter Sunday Spring feast.

The Easter holiday is the main annual holiday for Orthodox Christians. In fact, the holiday is so important that in the Ukrainian language it is referred to as the “Velykden” — the Great Day. This day is typically is full of gluttonous delights as the longest fast of the year is held before the Easter festival. Amazingly, the tradition of keeping the fast is still alive Bessarabia, but for many this is done for religious reasons rather than those of health. It is a commonly held opinion in these parts that fasting is healthy and beneficial. This food critic is not a doctor, so can say nothing about this practice for sure, but it is a certainty that if you can keep up a fast for 40 days, your willpower is doubtless very strong!

The Friday before Easter, the preparations for the feast begin with the cooking of a special Easter bread called “paskha” — which has a round shape and can be of several different sizes — ranging from the tiny muffin to heavy small “barrel” size examples. The taste of this cake/bread is sweet but is also different from home to home because every family has different recipes. Family wealth also had a tremendous influence on the sort of bread that would be prepared — proper paskha should include many eggs, butter and imported ingredients that were very expensive in the old days — sugar, vanilla, citron and raisins. Paskha would never be baked in small amounts. It would be typiFood & Drinks 67 cal to prepare dozens of loaves at once — for one’s own family and relatives, for neighbors and for presents for the poor. Preparing 20-50 kilograms of paskha at once was the usual practice in past times. Today, people bake much smaller portions of the cake when preparing for the holiday, and unlike the olden days one can now purchase paskha in the bakery — but it still very common to give paskha as presents to loved ones during the holiday.

Another important Easter tradition (this one is more widespread in the West) is to color and decorate boiled eggs. Very often, they are decorated with sophisticated ornaments that symbolize a particular Slavonic vision of world structure. As in other parts of Eastern Europe Easter, Bessarabia in remarkable ways continues to combine the vestiges of old Christianity and Paganism with elements of Jewish traditions. Easter (Paskha day in Ukrainian) is a holiday that has the Jewish Pesach as a root. For example on the Thursday before Easter Sunday, every house should be perfectly clean. That tradition continues to be strongly followed in traditional families and comes after the Pesach tradition of cleaning a house from leftover grains before the start of the Passover. From pagan times until modern days in Ukraine and Moldova, there exists a very important common tradition of having a common family meal near one’s ancestors graves on the seventh day after Easter day. This is clearly a pagan tradition. People bring food, colored eggs and sweets and while eating they discuss their dead relatives. In this way, it is believed that the souls of the departed are kept rested and calm.

Bessarabia is multinational region, but it is religiously homogeneous now, so you will find paskhas and eggs in every house. After indulging in a long fast people will start to consume a lot of meat, with the most common meat for the use during the holiday being stewed lamb and rabbit. Another common and nourishing dish is that of the baked piglet. Turkey stuffed with walnuts paste and meat bread made of minced mutton and fried domestic sausage might also be consumed. Until recent times it was common for a local family to prepare a smoked ham, that would be hanged and smoked near the chimney during Christmas time.

Other traditional local dishes also are very common — mamaliga (polenta), placintas (a type of filled pastry), pickled vegetables and fruits and of course the local cheese “bryndza”. Also a great deal of wine will be present because Bessarabia is a wine making region. On Easter night there are also other very important traditions — people will take some food in a basket (usually one paskha, some eggs, smoked meat and a bottle of wine) and bring it to the church. After the conclusion of the divine service, the orthodox priest will come out of the church and begin the ceremony of sanctification, sprinkling the food with holy water. After that operation is completed, the food is believed to be good for usage long after the conclusion of the fast days. People start their meal with sanctified eggs and wine. In such a way, the fast is broken and people return to their ordinary dietary habits of consuming meat, cheese and wine. Happy Easter to all! The Friday before Easter, the preparations for the feast begin with the cooking of a special Easter bread called “paskha”

Dmytro Sikorsky is a historian, scholar and historian of the Odessa and Bessarabia region.

James Bond is From Odessa