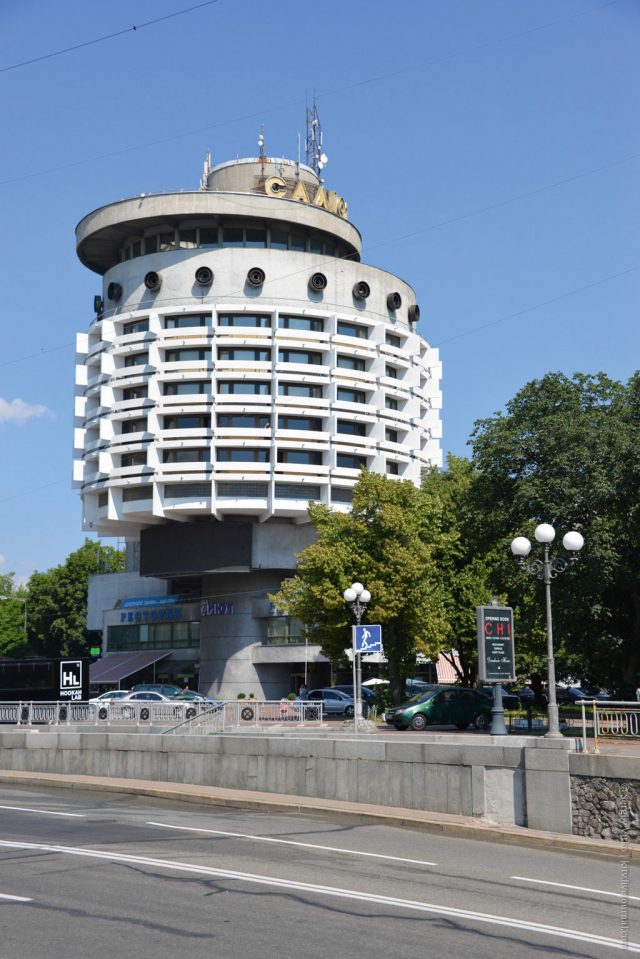 — is the most original example of Soviet futuristic architecture to be found in Kyiv. It was built in 1982-84 and designed by the great architect Abraham Miletsky. He designed it with the spirit of a space ship in mind. The building is a load-bearing concrete pipe, on which six residential floors are hung upon an elliptical shape. It is a striking design. Inside the pipe are the elevators and a spiral ramp along which one can move along the diffrent floors. On the second floor of the building there is a restaurant and under the roof there was supposed to be a second — summer restaurant. Originally, the building was designed to be 18 floors high, but it was “cut” in the process of construction. Miletsky, repeatedly high ranking communist party officials demanding that the height of the hotel be radically lowered. Under the pressure of high ranking authorities the fate of the building was decided- instead of the planned beautiful, round tower, a low barrel-shaped structure was built instead. The hotel is located on the hill of the Dnieper river coast, in the Pechersky district, near the Kyiv- Pechersk Lavra. Earlier on the site of the hotel there stood the bell tower (built in 1750) of the Nikolaevsky Military Cathedral (1690- 1693), which was blown up in the 1930’s. 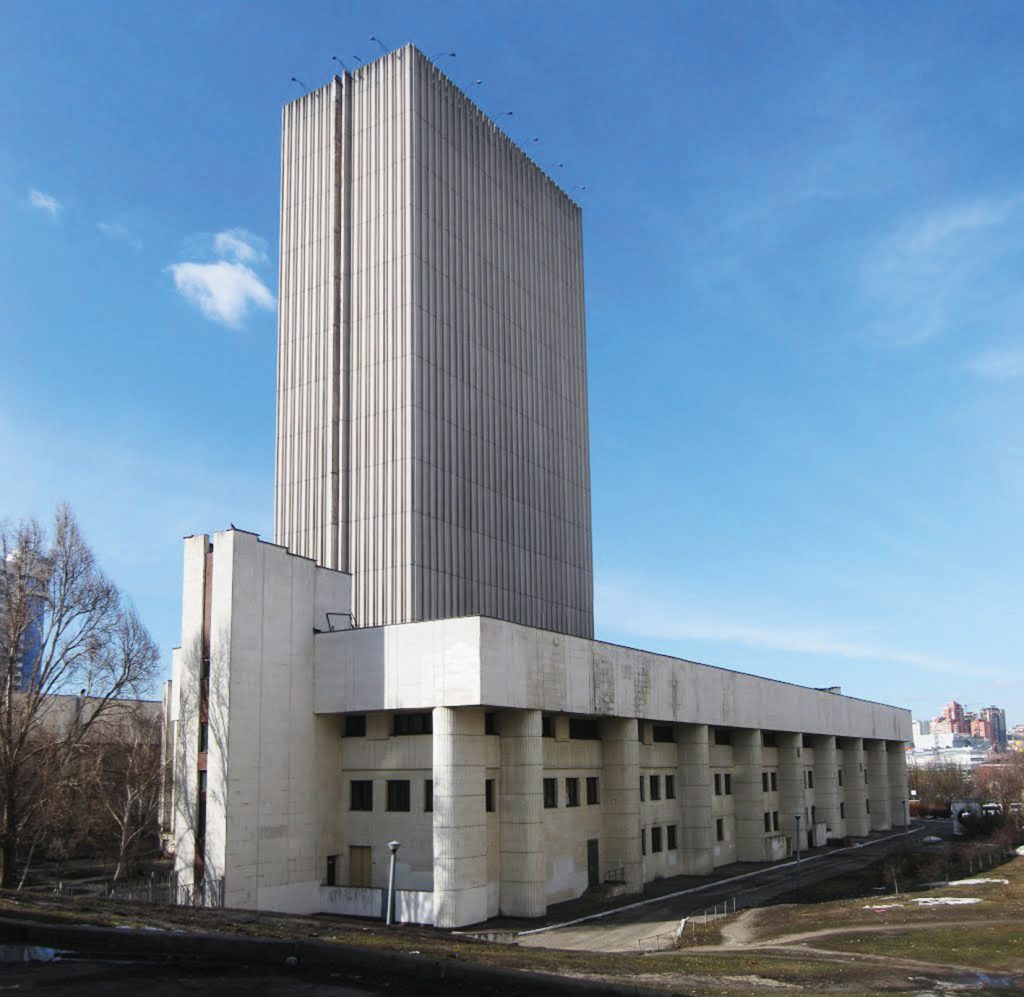 The National Library of Ukraine.

Kyiv’s temple of information is a construction of two structures:one vertical and the other horizontal. The library was built in 1989 by a group of architects which included V. Hopkalo, V. Grechin, Yu. Piskovsky, V. Kolomiets and L. Prutzakova. The vertical part of the building is a huge book depository, 27-floors in height and sealed from all sides. With the help of special equipment, the required literature is delivered to the reading rooms. The horizontal part of the building is the part through which visitors enter and it is marked with a kind of rose that gives the library a sort of sacral character in the perception of its architecture. The ceiling of the lobby is decorated with a very powerful fresco called “Pain of the Earth”. 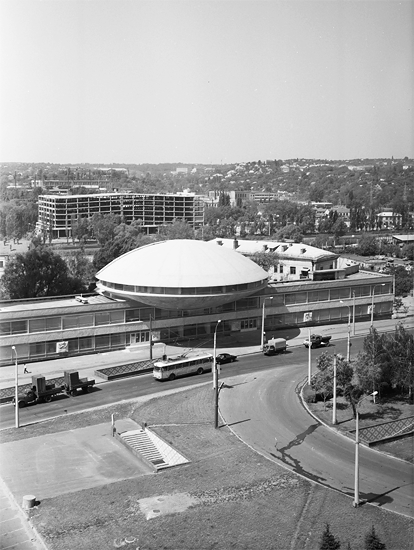 The Institute of Scientific, Technical and Economic Information.

Built in 1971 this building is a vivid example of the second wave of Soviet modernism. The composition scheme of the building is based around three objects, a high-rise 16- floor heigh potion, an extended two-story and film lecture hall, formed by two spherical segments that resemble a flying saucer. The creator of the cinema project was the architect, scientist and composer Florian Yuryev. In the early 1960’s, he worked on creating a grand “synthesis of the arts” — and he sought the connection between music and color, insisting that the proper transfer of colors could influence a person’s perception of sound. The architect developed a unique spherical hall in which a color music theater could be located. At the base of the plate is a reinforced concrete lens with a diameter of 34 meters, which made it possible to create a room with perfect acoustics. 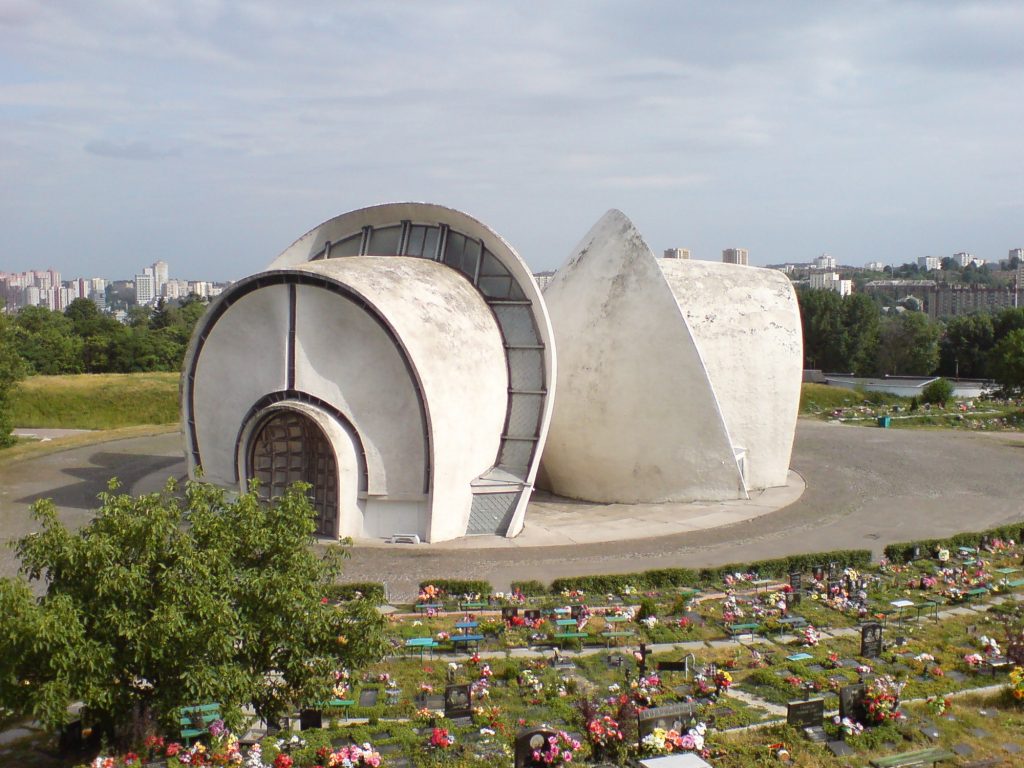 The Kyiv crematorium has for a long time been considered to be one of the most mysterious places in the capital. It is not often written up in the guidebooks, but it is perhaps the most interesting sculptural monument of the capital. There is also probably nothing more unusual in the whole country. This structure is part of the Memorial- funerary complex, which was designed by the architect Avraham Miletsky. The foundations for the project were laid in 1968. The structure is composed of two huge shells painted in a white color, which eventually became gray and were covered with soot. The building of the hall of farewells, crowning the mournful hill, appears as a sculpture molded from reinforced concrete shells. However, the project remained unfinished. Located under a thick layer of concrete is the “Wall of Memory”. It was a huge bas-relief 213 meters long which was created by artists Ada Rybachuk and Vladimir Melnichenko. During the final stage of the work, Soviet officials decided to pour the wall with concrete. 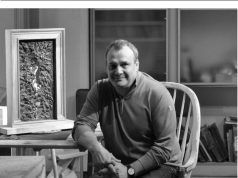 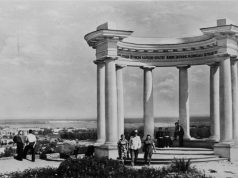