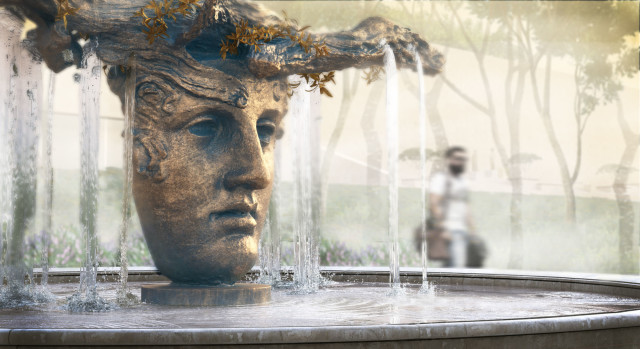 While Primorsky Boulevard and the Potemkin Stairs are staples of Odessa’s architecture and history, the neighboring green spaces have been neglected for many years. Just north of the Potemkin Stairs, in the shadow of the Colonnade and Vorontsovsky Palace, a group of developers is working to revitalize the space with the creation of the Greek Park. The Odessa Review spoke with the project’s creators, Michael Reva and Janna Kiselyova.

Michael Reva (MR): We approached the project with the broadest definition of the word ‘park’. It will be a recreation area, blending culture and entertainment. Our goal is to create a comfortable, beautiful location for the people of Odessa.

Janna Kiselyova (JK): The space will be divided onto three parts: an open-air museum of Greek sculptures (as conceived by Michael), an activity space and a landscape park. We plan to conclude construction and landscaping by Easter of next year.

MR: For some time, this area has been “dead”: undesirable for development and with little activity. Just a few yards away, there’s a bustling public space on Primorsky Boulevard, attracting locals and tourists alike, but here there was nothing. We’re finding new ways to attract the public with the help of our urban designer, Konstantin Yemelyanov from the Urban Institute. We aim to turn this abandoned space into a hotspot of recreation and activity.

JK: The first project proposal, selected via competition, was found to be infeasible. It called for the construction of a number of heavy buildings and a large water feature, all of which threatened to exacerbate erosion or even to create a landslide. So the original plan was abandoned, and for a time, we didn’t have a replacement.

MR: At that point, the Mayor asked us to step in and provide a solution.

JK: So our lab joined up with the project. First of all, we surveyed the area. We studied local noise pollution, soil conditions and after that we selected safe and suitable areas for development.

Every member of our team has a different background. We have city planners, architects, historians, restoration experts, landscape designers, an anthropologist, a sculptor, and myself, an architectural environment designer. Altogether, our team covers 10-11 different disciplines.

MR: Between 1996 and 2008, archeological excavations were carried out in the vicinity of Vorontsovsky Palace. Some of the Greek artifacts uncovered in these digs are displayed beneath the glass shelter on Primorsky Boulevard.

A commemorative plaque will be installed in recognition of the first Greek colonists who established settlements in the Odessan Gulf almost 2,600 years ago. It is fitting that the Greek Park will stand on the same territory as the Gulf’s earliest known human settlements.

JK: Our city is profoundly multicultural, and Greek culture is deeply connected with that of Odessa. It’s worth noting that the earliest writings to mention Ukraine were authored by Herodotus, a Greek.

JK: The main problem we face is reinforcing the slope above the Park. Beneath the Colonnade, overlooking the park, the incline has been steadily eroding, so we need to install structural supports. If we do nothing, the slope could collapse, damaging the buildings nearby — just like what happened in Chernomorsk.

MR: A landslide could begin at any moment, anywhere along the slope. The land could cave in under the Vorontsovsky Palace, under the Colonnade, anywhere. If we don’t act, all of the architectural heritage along Primorsky is at risk.

JK: Reinforcing the retaining walls along the incline will be a very complicated undertaking, but critical. It is both functional and cosmetic. Similarly, the surface work, the landscaping, is not just a matter of appearances.

MR: This project would not have been possible without the support we received from donors. It was not a matter of sponsorship or investment – it is a philanthropic project dedicated to creating a huge cultural space, spanning 50 thousand square meters. A gift for for the city, with Maecenas as its patron.

JK: Despite some public resistance, the Association of Greek Entrepreneurs and Enterprises, headed by Panteleymon Bumburas, decided to provide their support.

MR: As a result, the Ministry of Culture will be selecting the installations on display in the open-air museum on the Park’s lower terrace.

JK: We’re constantly finding new inspiration and interesting details about Greek architecture. For example, in the Acropolis museum, we found a book which depicts the stairs and sculptures leading to the Parthenon, which appear nearly identical to the plans we already had laid for the Park. In this sense, history is confirming our own vision for the Park’s development.

MR: It’s amazing that we’d included this in the project before we’d seen the source material. It’s reassuring to see that we’re channeling the right ideas, the cultural basis for our design.

JK: Ukraine’s urban environments deserve greater commitment to their art and beauty — so we’re thrilled to have an opportunity to share this recreational and cultural space with Odessa.

MR: First people shape the space, and then the space shapes people. We want the environment we’re creating to guide and inform future generations of Ukrainians.

Michael Reva is the Head of the City Design Council, a sculptor.

Janna Kiselyova is an architect, founder and CEO of the J.K.: Lab Architects studio.