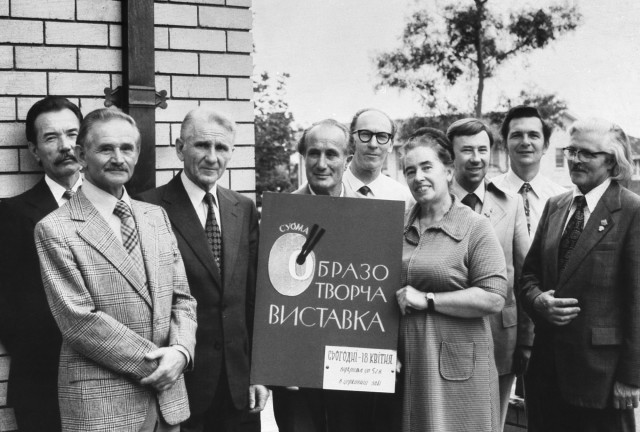 The ongoing revival of aboriginal art in Australia is emblematic of the nation’s complex history, and the often fraught relationship between Australia’s settlers and its native population. The beauty and cultural value of these works is without question, and their renaissance in Australian cultural life has carried them as far afield as Kyiv, where they have found resonance with their audience. Curator and cultural critic Myroslava Hartmond reflects on Australia’s recent reappraisal of aboriginal culture, cultural diplomacy, and the relationship between Ukraine and the land Down Under.

Aboriginal art is widely believed to be the longest-continuing artistic tradition in the world: Australia boasts cave paintings comparable in age to those of Europe’s Lascaux and Altamira, with a rich symbolic language that harks back to a primordial ‘dreamtime’. Prehistoric artists crafted their ‘canvasses’ from bark, removing it from trees and flattening it before treating it with the sticky fluids from orchids, creating an adhesive black or red background. They derived their palettes from red and yellow ochres, ground up and mixed with water. Charcoal and kaolin clay served for making black and white colors. However, for the most part of its 30,000-year existence it was the proverbial tree falling in the forest, known only to itself.

The European settlers who arrived on the green continent in 1788 had very little appreciation for indigenous culture, or indeed the local population in general. For years, ‘Australian painting’ was another name for the strong European tradition of painting that developed on the green continent: the Heidelberg School, for example, is known for establishing Australian Impressionism (currently on display at the National Gallery in London). A painting by Tom Roberts from 1888, titled An Australian Native, reflects both the European orientation of Australia’s artists, as well as the widely-held racial prejudices in their predominantly Anglo-Celtic society. The ‘native’ in question is in fact a fashionably attired young woman of European descent. She is depicted in semi-profile, the folds of her pink dress falling over a pronounced bustle, bamboo-handled parasol clutched in hand, á la parisienne. Roberts’ French education is more evident in the painting than any authentic representation of aboriginal culture.

Bark paintings first came to public attention in 1968, when the Yirrkala bark petitions, the first traditional documents prepared by Indigenous Australians, were recognized by the Australian Parliament, allowing for representation of the peoples of the ‘first nation’ in Australian law.

In 1988, the celebration of the ‘Bicentenary of Australia,’ marking 200 years of European settlement, provoked widespread boycott and protest from many Australians who insisted that the continent’s history did not begin with the arrival of the first fleet in 1788. In response, an installation titled The Aboriginal Memorial, consisting of 200 hollow log coffins from Central Arnhem Land, decorated by 43 traditional artists, was presented at the Biennale of Sydney. The haunting cenotaph struck at the heart of Australian society, pointing to the violence and conflict that characterized contact between the two seemingly irreconcilable worlds.

Outside of Australia, however, this complex political context is less evident. In the 1980’s, Aboriginal art unexpectedly became a hit on the global art market and as a result, white Australia began to take notice of the first nation’s creative genius.

Aboriginal art’s early commercial success is likely due to its wide appeal, even to those with little knowledge of its cultural matrix. It features attractive naturalistic and geometric designs, and an instantly recognizable color palette, which – much like the Ukrainian vyshyvanka – makes for effective national branding. Critics were quick to dismiss it as cultural ‘trafficking’ in non-Western objects, a bubble that was about to burst, as bark paintings were generally thought to be of little more value than souvenirs.

The government were quick to recognize the untapped cultural-diplomatic potential of the first nation’s artistic output. It wasn’t long before a National Museum of Australia opened its doors, offering a new material history. With this official embrace of aboriginal art, bark painting became a national symbol. Over the past few years, the Australian government has purchased and repatriated many bark paintings from earlier periods. Many of these were bought by European ethnographers, travelers, collectors in the first half of the 20th century.

A landmark exhibition called ‘Old Masters: Australia’s Great Bark Artists’ brought together over 2000 works in the new building of Canberra’s National Museum of Australia. The term ‘old master’ is commonly applied to any painter of skill who created in Europe before 1800, and is thus a hallmark of quality. The title was intended to provoke, an incitement to accept the masters of the world’s oldest artistic tradition into the fold of Europe-centric art history. 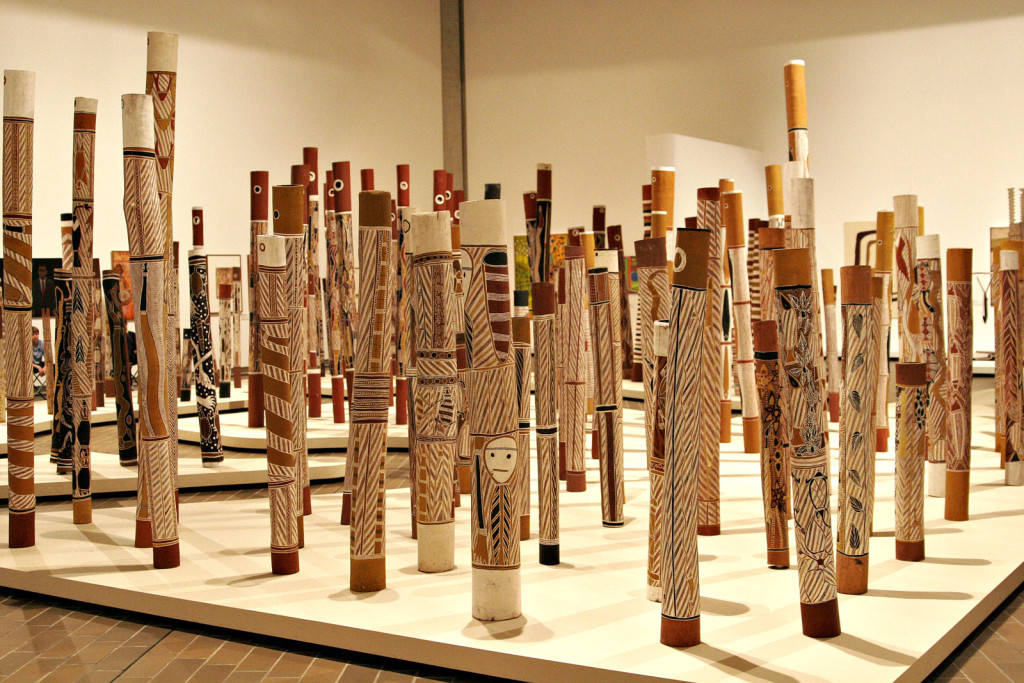 Research undertaken in the late 1960’s and 1970’s discovered that a great deal of aboriginal art is purely secular and decorative, aesthetic in inspiration and not magical or functional in any sense, but indeed, art for art’s sake.

The National Museum of Australia together with the Australian Ministry of Foreign Affairs and Trade developed a virtual capsule, which can be digitally displayed anywhere in the world without putting Australia’s priceless culture artifacts at risk. Just as totemic patterns and scenes (or ‘dreamings’) were reproduced on sand, dwellings, utensils, and the skins of tribesmen, digital technology transports the artifacts thousands of miles away from their point of origin.

The ‘Old Masters’ traveling exhibit opened in Kyiv’s Triptych: Global Arts Workshop on January 25th with a fanfare of publicity. A diplomatic reception and launch party celebrated of Australia Day, 25 years of Ukrainian-Australian diplomatic relations, and 70 years of Ukrainian Settlement in Australia. Fourteen high-definition panels were manufactured with Canberra’s supervision in the preceding weeks. The display was supplemented with original artworks from Australia’s Art Bank. These had been shipped to Kyiv when the Australian Embassy opened as part of the government’s response to the tragic downing of Malaysian aircraft MH17 on 17th July 2014. Chargé d’Affaires Bruce Edwards’s decision to spearhead the cultural display was a statement of the mission’s continuing engagement in Ukraine.

The jigsaw puzzle accompanying the ‘Old Masters: Australia’s Great Bark Artists’ exhibition, a reproduction of Dawidi’s Dilly Bag Fish Trap, arrived about a week after the exhibition officially opened. The gallery team at Kyiv’s Triptych gladly accepted the daunting 1000-piece challenge. The painting showed a part of the Wägilak Sisters narrative, which establishes the rules of marriage and tells the story of the creation of the first monsoon. I reflected on the scene, as though observing the puzzle through the eyes of Yirawala’s Totemic Crocodile, considering the significance of the image: a group of Ukrainians assembling the image of a sacred scene of great totemic importance for the people of Central Arnhem Land.

My mind turned to the Ukrainians who benefited from Australia’s post-war ‘populate or perish’ immigration policy, arriving in 1947 after a harrowing journey by sea, disembarking into an alien landscape. Many of them came from Western Ukraine, finding themselves on the wrong side of history as Soviet hegemony was firmly established in the region. They fled the gulags, but found themselves obligated to dedicate two years of their lives to labor in harsh conditions, interned in work camps (segregated by gender), digging into the outback soil as they constructed the railway networks that today link Australia’s major cities. Among the laborers were doctors, engineers, teachers, scientists, and artists – including Michael Kmit and Leonid Denysenko, who would become key figures in the creation of the Diaspora.

While not the largest in number (numbering around 40,000 today), the Ukrainian community of Australia is among the best organized and most politically vocal in the world. It ceaselessly denounced the human rights violations of the Soviet regime, including the Holodomor of 1932-1933 and political imprisoning of the dissidents in the 1960’s and 1970’s; it welcomed the non-nonconformist artist Ivan Marchuk in 1989, as the ‘living genius’ fled the KGB in the Perestroika years and established himself as a globally-renowned painter; it advocated the Orange Revolution and the Revolution of Dignity through political statements, publications, social media campaigns, and cultural displays. Australia’s Ukrainians retain a link with their spiritual homeland while contributing to the development of the Australian state.

Today, Australia has embraced a policy of multiculturalism, which asserts equal rights to all Australian citizens in education, employment, healthcare, and justice, and seeks to purge its immigration policy of racial discrimination. Indigenous culture, belonging to just 1.5% of its population, plays an important role in shaping the country’s contemporary identity. Projected onto the international stage, it serves as both calling card and a contribution to world heritage by a society that, nonetheless, remains distinctly Anglo-Celtic at its core. Whether this Aboriginal turn is inspired or exploitative remains open for discussion. Memory politics and cultural reconciliation are on the agenda of many societies across the globe. Whatever demons lurk in that Victorian hothouse of passions, let he who is without sin cast the first stone.