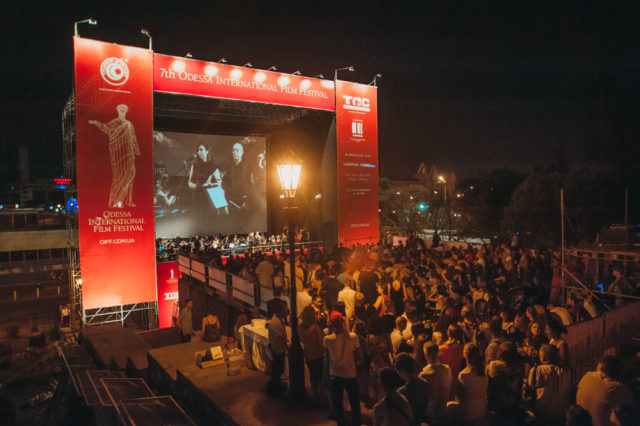 The “Rodina” Cinema theater and the Theater of Operetta both have been packed during movie presentations for the first day of OIFF. On this very hot Saturday, many lucky and very happy holders of tickets, accreditation and other privileges gave up the pleasure to plunge into Black Sea, and instead indulged themselves with the art of cinema. It’s interesting because they all have one thing in common – they are young.  It was quite difficult to find spectators over forty in this massive crowd. However, two dramas, “Marguerite” and “Julieta “- both about touching grown-up issues – have been submitted to the judgment of such young audience.

The Festival Palace could barely accommodate all the viewers, who wished to watch the latest from director Pedro Almodóvar. The movie “Julieta” is a drama of its central character, written and directed by Pedro Almodóvar. It portrays its main characters attempts to runaway from loneliness and emptiness, in search of a sort of fountain of ife and attempting to move her life forward. The questions of love, family values, tenderness and passion tend to be in every single storyline of this prominent Spanish filmmaker.

The movie “Marguerite” is a film-revelation; a sort of source of pleasure for straight-forward people. A kingdom of flattery, falsehood and adulation pushes the main female character, an opera singer, to go astray. Director Xavier Giannoli creates a twist of fate when it turns out that the mediocre singer becomes a more stouthearted person than a handful of talented men who are trying to coach her. What makes her so unaware of the world around her? The money or the fame? Not at all. Marguerite has more at stake. This movie has a good note from its creator, listen for the caws of the invisible peacock – а beautiful bird. But, is there more than just pretty feathers and a palatable presentation?

The night ended with a beautiful presentation of 1916’s “Sherlock Holmes” – premiered a century after it was produced – on the Potemkin staircase. American director Arthur Berthelet made this into a four part presentation that starred theater actor William Gillette. Gillette’s interpretation of Holmes famously had the pipe and the hunting hat that we all know today. Everybody was there to see the quintessential Holmes, from the international film industry to the families of Odessa. The atmosphere was warm with many laughs, especially at the excessive facial expressions of the villainous character Moriarty. The silent film was accompanied by the composer Donald Sosin and exciting music made especially for this film. A delightful end to the evening, we hoped you all enjoyed this bright start to festivities.