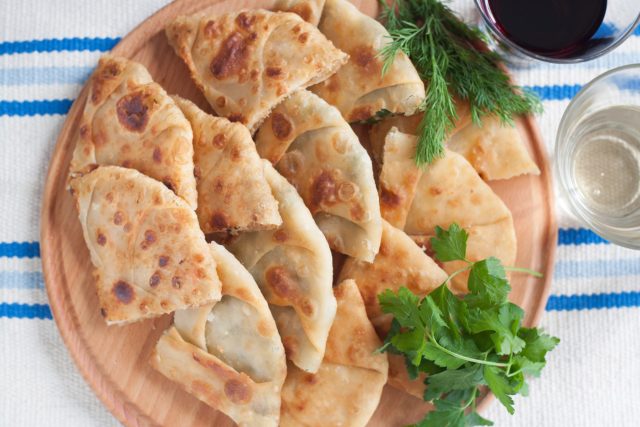 The Plăcintă is Bessarabia’s traditional pastry. It resembles a thin, small round or square-shaped cake and is usually filled with a variety of soft cheeses, or with fruit jam composed of apples or apricots. Popular across the entire region from Romania and Moldova to the Carpathians it has a wonderful history

The evolution of some culinary dishes is intertwined with History with a capital H. In the history of cooking, one could find recipes that have constantly changed and could be seen as a connecting link between modern times and our past. If one wants to create a recipe that will live on through the ages, all one has to do is begin by making some stiff dough. After that one must let it lay for half an hour and afterwards divide the dough into small balls and roll each one out into thin round pieces. Put pieces of crushed salted sheep cheese (brynza) into the center. Fold each piece into a flat round scone and pan fry both sides in oil. Voila, after a few simple steps, your amazingly tasty plăcintă will be be ready for eating!

Originally from Romania and Moldova this mighty cake conquered the Black Sea steppe, and now can be found all over Bessarabia and in large parts of Southern Ukraine where the plăcintă remains a very common everyday dish. Even as far as the Podolia region you can find the local variant referred to as the “palyanitsa”. The word plăcintă itself comes from Latin placenta, which means cake and originates from the Greek “plakount” or “flat cake”. In Ukraine the surname “Plachinda” (or it’s local variant of pronunciation) is very widespread.

The plăcintă can be prepared with a wide variety of different fillings which can include local sheep cheese brynza, cottage cheese, pumpkin, fresh or salted cabbage, green herbs, potatoes, meat and liver. Also popular are sweet stuffings: apples, plums, cherries, apricots, peaches and even strawberries. A plăcintă with fruit is usually served with sugar powder on top, which not only sweetens the taste but also separates the salted from the dessert variety.

In Odessa cuisine the plăcintă has a long history. If one is to research old menus from Odessa restaurants of the first decades of the 19th century you will easily find them side by side with such Balkan dishes as stewed lamb, sorbet, kataif and lakerda (a kind of salted fish). Since the latter no longer exists in the menu of the Odessa restaurant, the plăcintă remains very well-known in the houses of the city. There is even a unique Odessan recipe for plăcintă filling: pumpkin with salt and pepper. Typically the pumpkin filling is sweetened but this one is salted.

While it is true that people in the region like the dish, it is equally true that most don’t know how old the recipe is! Some will tell you that it dates from medieval times, but the truth is that plăcintă has very clear ancient Roman roots! In those times it was called ‘Placenta’. It existed as a layered cheese and honey pastry but was much more that the sum of its parts baked together. Such a dish was part of a ritual and offered to the gods themselves as a form of bloodless sacrifice.

We have a good sense of the historical provenance of the recipe largely because of Cato the Elder (the man who was best known for pronouncing that “Carthage must be destroyed”) as he included it in his “De Agri Cultura” tractate written in 160 BC. This is firm evidence that the recipe of the plăcintă is actually more than 2200 years old! It could even conceivably be older because we do not know how long it had existed before Cato had taken note of it. There is every reason to think that the recipe was used by the ancients as well.

People often ask me “does the name of the plăcintă cake have any relation to the placenta birth organ ?” The answer I will always give them is ‘yes it is!’ That organ was referred to as such because of it’s shape that looked very similar to the cake. Another amazing fact is the opinion of some scholars that variously links the placenta to the famous Italian lasagne, Turkish Baklava, and even Pizza. And without a doubt the modern Odessan plăcintă has a strong relation to the Roman plăcintă due to the history of Bessarabia — that terrain was indeed once part of the Roman Empire, which had spread its culture through out every province and village it controlled.

So if you try somewhere a piece of plăcintă, do keep in mind that what you are eating is not merely a piece a cake but a real piece of history of the European civilization!