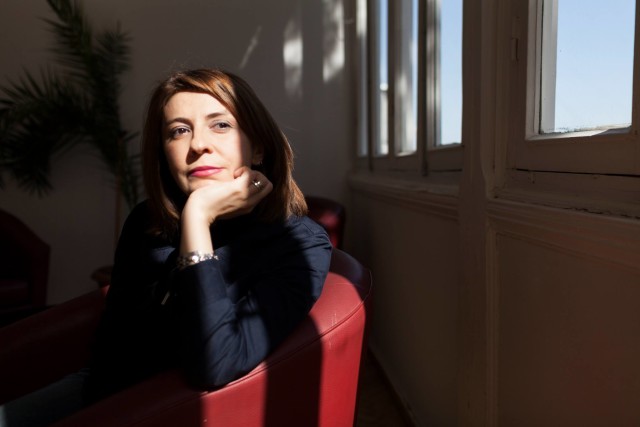 Natalia Antelava is an award winning, Emmy-nominated journalist, and a native of Tbilisi, Georgia. She is a former foreign correspondent for BBC, where she covered events from West Africa to the South Caucasus to Central Asia, the Middle East and India. She has received recognition for her coverage of human rights violations in Central Asia, Iraq and the United States, and has reported extensively on the conflict in Eastern Ukraine. Recently, she co-founded the media platform Coda Story, a Tbilsi and New York-based startup that approaches conflict journalism through dedicated coverage that continues crisis coverage even after most media attention has moved elsewhere. Antelava spoke with the Odessa Review at Coda Story’s Tbilisi headquarters.

Every foreign correspondent is keenly aware of the fact that we often abandon stories, and move on very quickly. There was a particular experience that I had in 2012, when I went to Yemen to cover the Arab spring. I spent 6 weeks reporting in Yemen undercover for the BBC. As I was leaving, I knew damn well that that story would fall off the headlines – not necessarily because the editors didn’t care anymore, but because if you don’t have someone on the ground pushing the story, the editorial attention span is simply not sufficient to continue reporting unless something major happens. So that’s what we do again and again and again: a major story happens, we pull out, we move onto the next big thing and vacuums are created. Having stringers and correspondents doesn’t address that issue, because it is the editorial attention that is lacking.

I came back from Yemen and started thinking about whether there are ways to address this. I started talking to my colleagues and friends in journalism who I respected the most. Together with my partner and cofounder, Ilan Greenberg, we came up with the idea of a news startup that would take one crisis, one big story, put a team of journalists on it and stick to it for an extended period of time, creating a kaleidoscope of coverage and covering it from different angles. What happens if you are interested in Syria and then go on holiday for two weeks and then come back? You can Google the news but it doesn’t give you the full picture of what’s happening.

One of the things that we tried to address when we were coming up with the concept was that when the internet came around, journalists received it with a lot skepticism – I remember there’s story about the British editor who said “oh, that internet thing, its not going to last.” Even when publications moved online, they still treated online platforms as disposable. If you think about it, all traditional platforms in journalism are disposable: you read a newspaper, you throw it out, you watch a television piece and you don’t see it again. We realized this was one of the main obstacles to staying on the story, because every time you tell a story in your 700 words, you have to tell it from scratch. What this does is turn the internet into this bottomless pit of updates, where we are creating content without laying it out, connecting the dots – even though we no longer have to write every story from scratch.

The challenge we wanted to tackle was how to maximize the benefits of online media being non-disposable. It stays there, its archived. In news, in journalism, we think of information as something that is incremental, chronological, tied to a date, whereas in real life, this is not always the case. Its not always the chronology that matters most. So Coda covers events thematically rather than chronologically. When we choose a crisis we want to cover, we spend a lot of time brainstorming the main themes – we call them currents – within the crisis. When our pilot took up the issue of gay rights in Russia, we thought long and hard about the themes of this crisis – we came up with the Orthodox Church, East-West backlash, the Kremlin’s influence outside Russia and a few others – and then every piece of content that’s published on Coda lives in one of these themes, one of these currents. We want to create a space where a reader, a consumer, will come to our site, look at the currents, immediately understand the big picture, and then be able to dive into the individual stories within these larger themes.

When we covered gay rights, one of the things we realized was that one of the strongest currents within the issue of gay rights in Russia was disinformation. Great effort was put into using perspectives on LGBT rights as a soft-power tool for pushing the Kremlin’s agenda. So that was something we were interested in, and disinformation also obviously offered a way of looking into other aspects of the region and its political challenges. It also very much dovetailed with my own experiences in East Ukraine, and in Georgia, but especially in Eastern Ukraine. I was fascinated, as a part of the foreign press corps covering the war in Ukraine, and the annexation of Crimea, by the role that Russian television played, how it fueled the conflict and yet how little of that was covered by Western media at the time. This was basically because journalists didn’t know how to cover the issue. Coda Story has a very narrative approach to coverage; we’re all about storytelling, dissecting complex subjects and telling good stories that will hopefully make people pay attention. I think that’s very much what coverage of the disinformation crisis in general lacks. It shouldn’t be just myth busting, it shouldn’t be just fact-checking. We need to tell our audiences how this affects people’s lives, how disinformation and propaganda – not just on the Russian side, but on both sides – changes the reality in which we live.

The human experience should be part of all journalism, because you tell stories about people –people want to read about people, journalists have a responsibility to tell people’s stories, and holding governments accountable means telling stories of people affected by their policies. We had human rights abuses as one of the currents in the LGBT edition, and what made that coverage powerful was that we didn’t just focus on human rights. To explain what was happening in terms of human rights, to explain what was happening to people, we also gave a larger political and geopolitical context, a bigger picture. For me, its obvious, its part of every journalist’s job, it doesn’t mean we’re human rights defenders, we aren’t necessarily activists. That’s an important distinction. But all stories are ultimately stories about humans and their lives, and therefore their rights.

We just published our first episode of a new series within our disinformation coverage, trying to tell the human story of disinformation. How do you cover disinformation through human stories? One of the things we’ve come up with is a video series called Clash of Narratives, where we follow two people who are on opposite sides of a narrative, two people with a very different vision. Our first season is in Georgia, focusing on two women, very well known in Georgia, a politician and a political activist. Both have television stations, both are women, both are the same age, yet with polar opposite views. One is very anti-Western; one is fiercely pro-Western. We spent a lot of time with them, following them around.

I think traditional media are, for very good reasons, still struggling with the transition to the new world of media. Some are doing a much better job than others, and I think that everyone will get there, but I believe that in 5, 10 years, maybe sooner, there won’t be distinctions such as “digital journalism” and “non-digital journalism”, there will just be journalism. The opportunities are incredible, the storytelling opportunities are incredible, though it also makes it a very crowded environment, which makes it very hard to compete. Of course, there is always going to space for the BBC and the NYT, and CNNs of this world – the mainstream media are incredibly important, but much of the future is in media platforms like us. There are more and more single-subject platforms that are serving certain niches. Our growth model is that we eventually create lots and lots of niche that address these different audiences. People are always interested in local news – you want to know what’s happening in your community and your environment- except local is no longer geographical, local is what interests you.

In many ways we’re going back to the basics. These new technologies and platforms are allowing us to go back to a more traditional kind of reporting, where you spend longer on stories. You are not rushed by the constant need to update. Famously, newspaper correspondents would always finish their story and go out drinking, but that has changed because now they file their story for the print edition and then they have to file ten updates. When I am on a story for the BBC, I’m stuck in a “live” position. That was another part of the inspiration for Coda in general, because you don’t go out and talk to humans if you are constantly filing updates. You are stuck in that echo-chamber. And increasingly media are stuck in this pattern, repeating things that other outlets are already saying. This is exactly what we want to escape from. Not only do we have offices in NY and Tbilisi, we have an editor in London and one in Berlin as well, and a network of freelancers, so we’re very very spread out. The really important thing for Coda is to be on the ground, and present in the places that we cover, so in this region its critical to have our finger on the pulse of what’s happening.

I don’t think there’s been a better or more important time to be a journalist. There is no shortage of crises to be covered. We started a year ago with a 4-month pilot that functioned as a proof of concept, and now we have two other editions, and we want to keep adding. There is no shortage of things we could be covering – from overfishing in West Africa, environmental crises, disease and global health. Heroine addiction in the United States would make a great Coda – there are so many things we would love to take on. Our aim is to keep adding coverage of specific crises where we feel we can add to the conversation, rather than add to the noise.