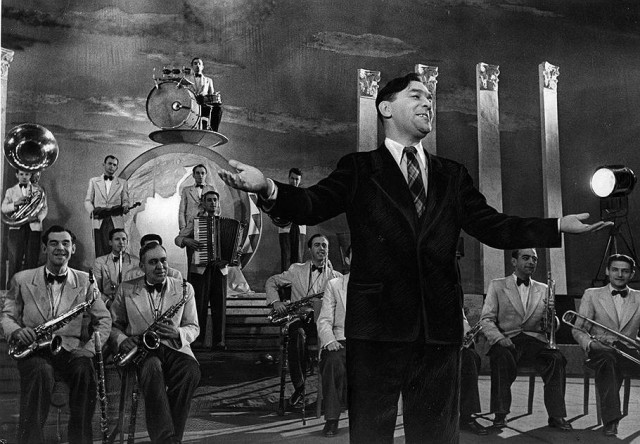 Leonid Utesov is Considered by Many to be Greatest Singer of his Generation, the ‘Soviet Sinatra’’. While he Considered Himself to be a Proponent of Soviet Jazz, Some of his Peers Did not Agree. This Article First Appeared in Russian in the Migdal Times.

In the second volume of essays on Soviet pop music, which dealt with the period from 1930 to 1945, the chapter titled “Jazz on the stage” opens with a photograph of Leonid Utesov. In 1977, when the book was published, it could not be otherwise: in the minds of the overwhelming Soviet majority (who, for obvious reasons, were not as familiar as their Western counterparts with the specifics of said genre), the word “Jazz” created associations first and foremost with the Black Sea bard Utesov. The artist himself did a lot to contribute to this image – positioning himself as the pioneer and foremost propagandist of Soviet jazz music. In his book, “Thank you, Heart” he wrote: “…I worried, suffered and fought back, attempting to defend jazz – all my life’s work…”

However, the jazz-men themselves were of a different opinion, and despite having the utmost respect for Utesov, they did not consider him to be a “colleague”. Even in the aforementioned chapter of the collection of academic essays on Soviet pop, Vladimir Freitas the leading expert and theorist of the genre, noted that all of the pre-war Soviet collectives which referred to themselves as Jazz-bands were in essence simply “pop orchestras”.

“When speaking mainly about pop orchestras – the article’s author writes – we use the term “Jazz”, which today has a much more narrow meaning, only because the collectives used this term to refer to themselves”.

Moreover, the musicologist Tamara Ayzikovich believes that, although Utesov’s orchestra always featured Jazz musicians, it rarely performed any authentically Jazz pieces and thus “the Jazz players did not have much of a chance to exercise their talent, and the orchestra was never any sort of pool of Jazz talent”. It is important to note that throughout its many decades of existence, Utesov’s orchestra never featured Jazz vocalists – only pop performers.

The famous pianist Leonid Chizhik, who worked in Utesov’s orchestra from 1968 to 1971 told the author of this article about an incident where he asked Leonid Osipovich [Utesov] to let him attend a Jazz festival, and the latter was outraged – “What do you mean, Jazz??!” Later, in the 60’s and 70’s when the aging Utesov was invited to various Jazz concerts as a sign of respect for his work, he would attend but later mercilessly criticize the musicians – he believed that the only “real Jazz” was the kind that was played in his band. This is what caused the renowned jazz musician and composer Yuri Markin to issue this stern remark: “Utesov’s jazz is to real jazz as our criminal songs are to French chanson”.

To be fair, it must be noted that all the founders of the first Soviet jazz orchestras were rather far removed from “Jazz” as it is understood today. Some researchers believe that the reason for this fact was that the American and European orchestras which these Soviet musicians had the chance to hear were really playing popular music in a Jazz style, and thus the Soviet counterparts didn’t have a chance to be exposed to proper, instrumental jazz.