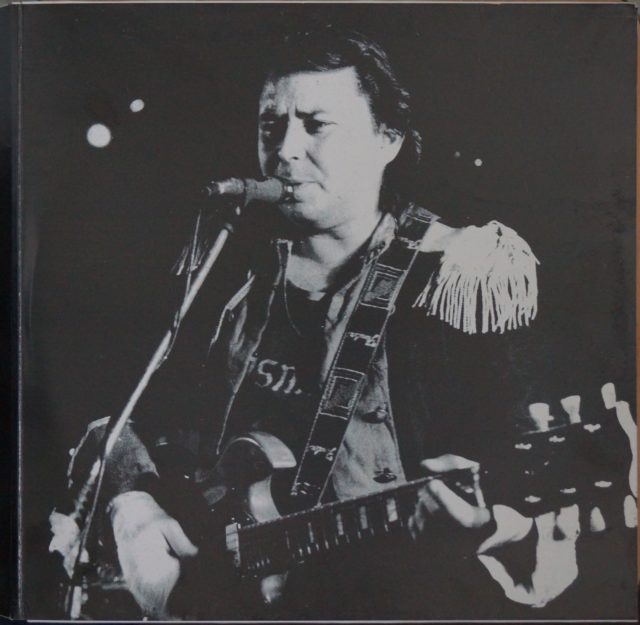 Is there such a phenomenon as an “Odessa sound” in post-Soviet rock n roll? In the same way there was a distinct Chicago sound in the Blues, and a Manchester sound in post-punk. That list is expansive, but the concept is straightforward. However, as many things about Odessa, the answer is far from simple. It is better to answer this question by going back to the very beginning :

In the 1980’s, the USSR had two major hot spots of home-grown alternative music: the Moscow Rock Laboratory and the Leningrad Rock Club. Towards the middle of that decade, similar organizations began to form in Odessa as well. The Odessa rock club first appeared in 1985, with Igor Gankevich, lead of the band “Bastion” as one of it’s founders. “Bastion” encapsulated the “Odessa rock sound” of the time – their lyrics were peppered with local toponyms: the Duc, Moldavanka, Deribasovskaya all made appearances. Many of the songs included references to the city’s folklore, combined with a healthy dose of general social commentary. Musically, Bastion’s sound was a mix between hard rock and singer-songwriter style ballads. While the hard rock component of their music was admittedly nothing special, when the unique Odessa flavor of their songs was combined with a sort of post-Soviet, Perestroika folk – something truly interesting and unique came to life. Tragically, Gankevich died in 1990 at the age of 28, leaving behind not a single studio recording.

The lack of studio recordings is truly one of the biggest pitfalls of tracing the history of Odessa rock. At the time, there were simply no studios in the city which were interested in and willing to work with younger musicians. Moscow and St. Petersburg were virtually the only options for those seeking to record an album. The second major problem was a lack of variety. Although there was a large number of young bands, most of them sought to imitate their idols, resulting in a similar sound across the board. The second half of the 80’s was a time when metal reigned over the post-Soviet musical space, hence the similarly heavy sound of most Odessa bands at the time: “Krater”, “Accent”, “Monte Kristo”, “Trash Machine”, “Volny Gasyat Veter”, as well as many others. Still, some of these bands did manage to gain a moderate level of fame and many even toured across the USSR (“Monte Kristo” and “Trash Machine” are two examples). The latter band even released an official LP in the early 90’s – which was naturally recorded and mastered in Moscow.

One of the most interesting bands on the early 90’s Odessa scene was “Provincia” (Province). They stood out from among their musical peers due to their original direction, playing their own version of progressive rock – a fairly exotic genre for that time and place. Their instrumentation was also quite unique and varied – they included woodwinds and strings in their collective. Their knowledge of arrangement also greatly influenced the music’s quality. However, despite their relative uniqueness, their sound was still mostly a result of “wanting to sound Western”, and many of their innovations were a result of that striving. An even more unique phenomenon on the Odessa scene was the band “Koshkin Dom” with their flamboyant frontman Max Lande. “Koshkin Dom” managed to be modern not only in the post-Soviet, but in an international context – they stood out by playing a Leningrad-flavored brand of New Wave with a distinct nod towards Post-Punk. The band wasn’t a purely Odessa phenomenon however, as some of the members were natives of St. Petersburg. Ultimately the band relocated to St. Petersburg completely and rarely made visits to Odessa. 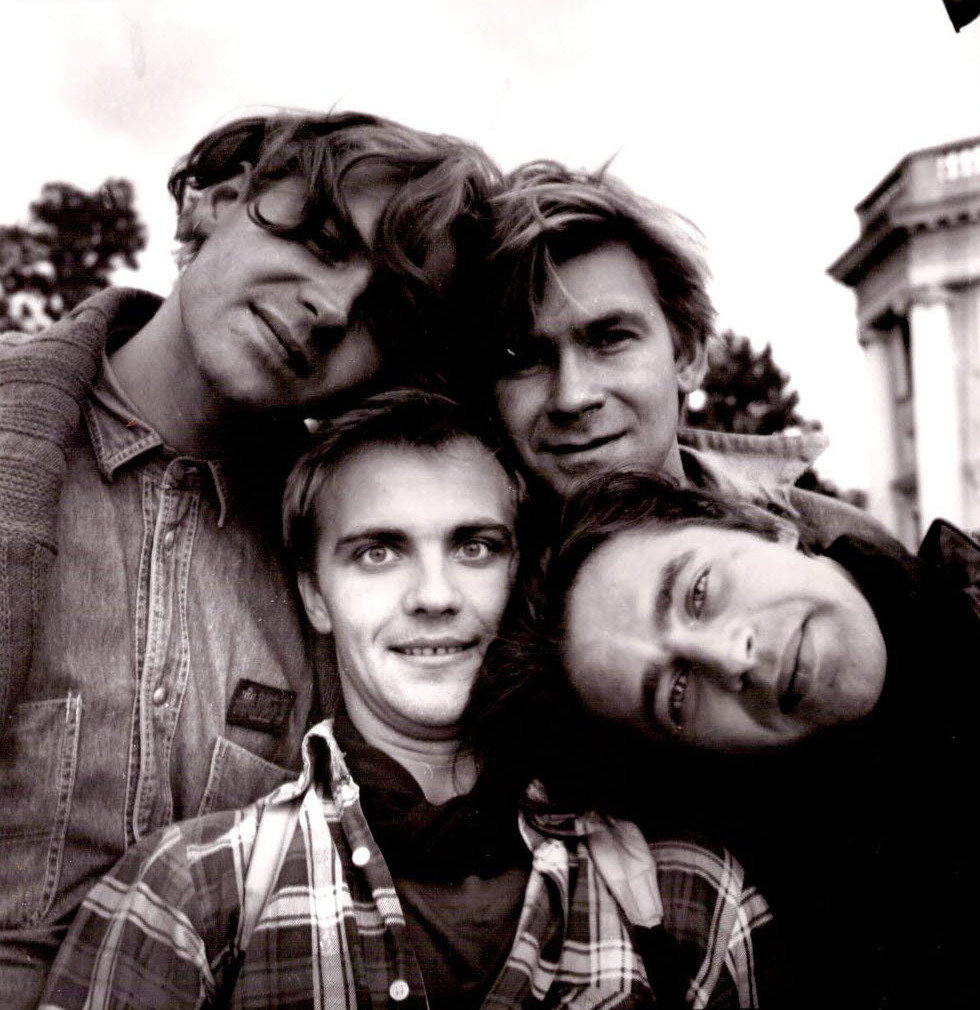 Max Lande himself was a charismatic performer who fit the “rock star” image quite well – he was exactly the type of character that the Odessa rock scene desperately needed. He was also the only one on the scene – that is, until the arrival of Stas Podlipsky. Stas had been a part of the Odessa music scene since he have been a teenager in the early 80’s. The music journalist Artemiy Troitskiy compared his band “Deti Na Trave” (Children on the Grass) to the prolific Ukrainian rock bands “Braty Gadyukiny” and “Vopli Vidoplyasova”, going as far as to call them the “main event of Ukrainian music”. “Dety na Trave” was eventually renamed “Klub Unilyh Liz” (Sad Face Club) and the band continued refining their sound during the 90’s with Podlipsky at the helm.

Podlipsky can truly be seen as the face of Odessa’s short-lived rock-n-roll phenomenon – a bright but prematurely extinguished star. There are a few reasons for his fame. First and foremost, Stas was an incredibly powerful and colorful personality. When he took the stage, no one in the audience remained indifferent. Of course, not everyone found his art to their liking. His music was a deeply underground one, built on the aggressive energy of punk rock and liberally peppered with street slang and profanity. At the same time, it was laconic and to the point. His lyrics inevitably stuck in the listener’s mind. Podlipsky’s songs were soaked in Odessa themes – or rather, he was such an authentic and earnest figure that he himself was a personification of Babel’s Odessa. Albeit one that had been transported into the 90’s and flavored with Iggy Pop style theatrics. 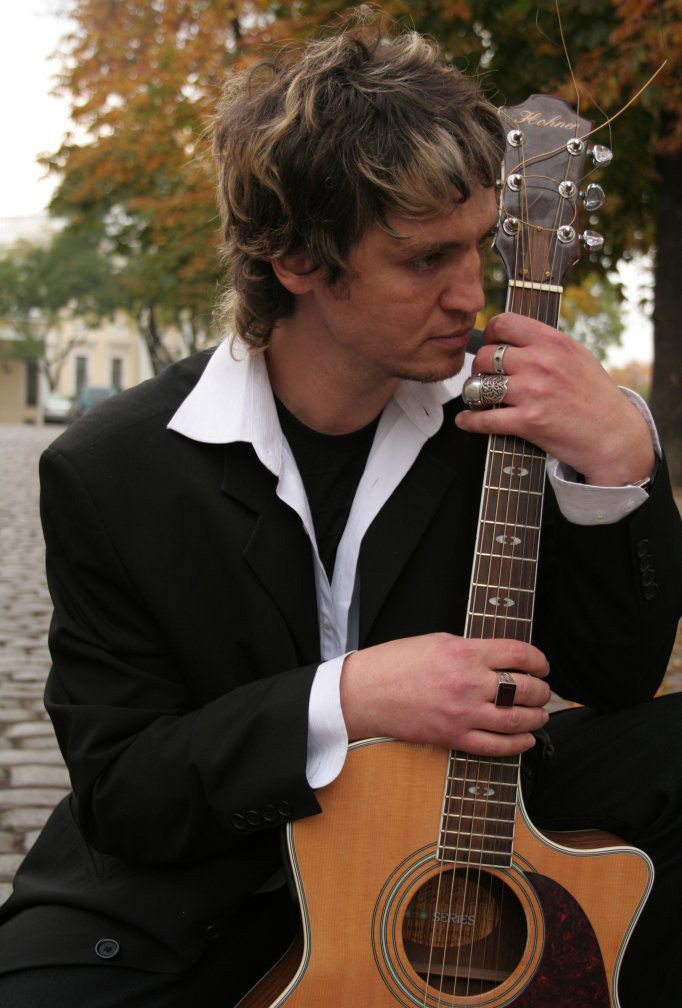 Stas also left behind a large number of tapes. His recordings sounded nothing like the polished Western sound, and sound production was virtually non-existent at the time – but despite all of that he managed to create a gripping and original product, working such unorthodox instruments as clarinet into his rock music. The result was oddly harmonious, unique, and thoroughly Odessan. When combined with vulgar, crime ridden lyrics the music had a jarring, confrontational effect. Podlipsky created an entire universe, populating it with characters based on his real friends and the colorful personalities stalking the Odessa streets. The nonconformists and freaks of the 90’s, their relationship with the society they lived in, their complex, haunted, intoxicated inner world – these were the main themes of his songs. In the middle of the 90’s, Podlipsky went even further – he recorded two albums full of “Odessa chanson”. Odessa, being a port city, always had a reputation for having a higher level of criminality compared to inland cities – the criminal element was so entwined with the city that overtime it became an inextricable aspect of Odessa’s culture. In those albums, Podlipsky managed to walk the fine line between the vulgarity of chanson and the myth-building of rock ballads – and seamlessly incorporate this mixture of styles into his songs and on-stage persona.

During that time, the press referred to Podlipsky as a “youth idol” and “new Wave Hamlet” – it’s clear to see that his personality influenced the subsequent development of Odessa rock strongly. After the death of Gankevich, the Odessa rock club eventually gave way to a new subculture of gloomy, perpetually intoxicated young people who stubbornly delved deeper and deeper into the underground. A number of alternative characters arose in Podlipsky’s absence: Sergey Bakumenko and his band “Mertvy Teatr” (Dead Theatre), Stevie Mladshy and “Adonis Kalahari”, Alya Kravchenko with “Normandy Neman”, the Odessa artists Igor Gusev and Andrey Kazandzhy with their endless lineup of one-off bands. It was an interesting time full of interesting people, but the music, despite its originality, left a lot to be desired. At the same time, the Odessa scene was suffering from a dire lack of venues, organization and scheduling, and as a result – a lack of audiences. Underground concerts were held mostly for narrow personal circles, and lacked the ability to reach any level of outside visibility.

This underground activity culminated in the Vladimir Nessi Memorial Festival, organized by Sergey Bakumenko in 1995. The event was notable first and foremost because it was, in essence, a piece of post-modern performance art and a satirical statement on the current musical scene. Soon after the death of Igor Gankevich in 1990, a yearly festival was established in Odessa in his honor. This was a serious event, hosting the A-listers of ‘отечественной’ rock music like Chizh, DDT, and Alisa. This was a festival of established, celebrity “Russian Rock” and the Vladimir Nessi Festival was made to be a counterpoint to it – a festival of young, musical nonconformists, the milieu Nessi himself belonged to. Most importantly, at the time of the establishment of a festival in his memory, Nessi was still very much alive, even performing at his own memorial as a member of several projects. The festival was meant to be an incisive satire of the institution of Russian Rock and Odessa’s rock club, which had by that time long ceased any meaningful or innovative activity and continued to exist out of simple inertia.

The Nessi lineups were compelling because of the sheer number of invited acts – the festival was a prime sampling of the deep underground of the time, featuring stars of the Kyiv underground scene such as Rabbota Ho, Ivanov Down, Itsky Aun, Medlenny Rul. Odessites were exposed to the high levels of craftsmanship that alternative musicians could reach of given proper motivation and support. Paradoxically, this festival would become the apex point of alternative music in Odessa, after which the movement began to decline until it virtually dissipated.

During the second half of the 90s, a sort of rock n roll rebranding took place. The strong influence of club culture took its toll on live music as well – many electronic and computerized elements were added to rock music. One of the Odessa bands that reflected this trend the most was “Tryn Trava”, founded by brothers Denis and Zhenya Bal. The Bal brothers were also instrumental in creating a new type of venue for this new current of rock music – small intimate clubs instead of open-air stages. However, there was one problem – a lack of performers. The scene was still stagnating in its archaic Russian rock phase, with virtually no fresh alternatives to be found. Only in the 2000s did a band appear which could truly be seen as a modern contribution to Ukrainian rock by Odessa. That band – !Zirk (Circus) – was a joint project between Sergey Bakumenko (Mertvy Teatr) and the aforementioned Denis Bal. The members’ high level of professionalism caused the band to stand out among its peers – most of it’s member musicians were classically trained, and they were thus able to create records of exceedingly high quality. The band’s sound was imbued with a very vivacious sort of funk, and it frequently experimented with formats and styles. The dramatic brass section and colorful, costumed live performances made every concert into a celebration. Unfortunately, despite Denis Bal’s originality and quality, the band suffered the same fate as many other Odessa projects – they dissolved in the mid – 00’s, leaving behind only one studio album. That album was designed for radio play, and as a result, was excessively electronic and over-produced. 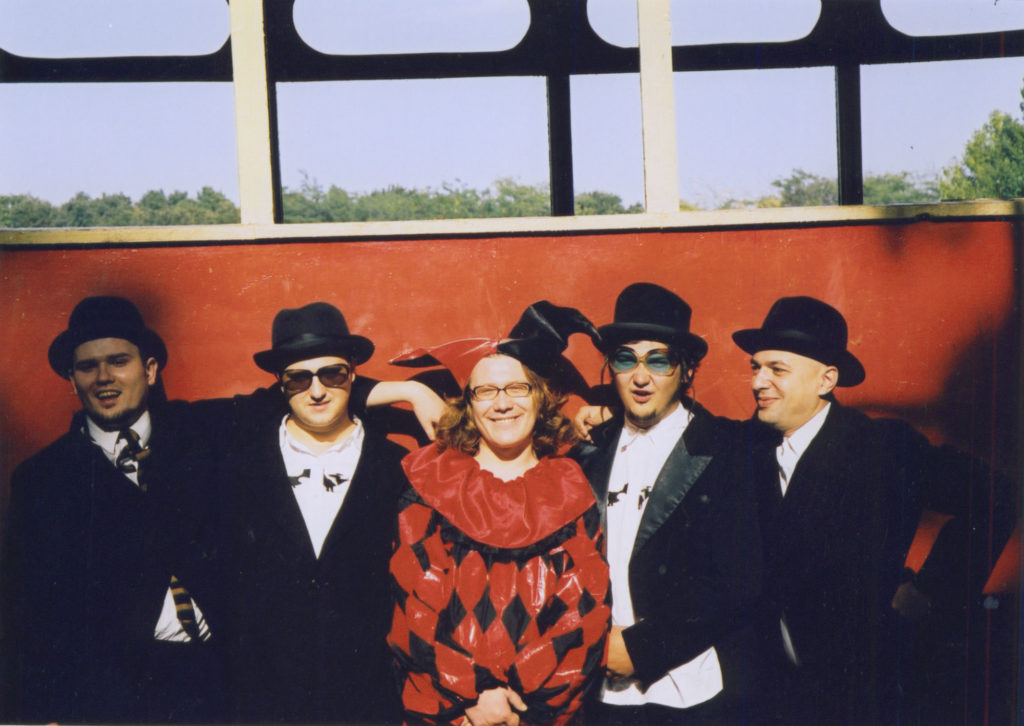 Unfortunately, Igor Gankevich and Stas Podlipsky are really the only prolific names that come to mind in terms of a purely Odessa rock sound. Russian rock’s hegemony in the 80’s and the lack of concert venues in the 90’s had a negative impact on the development of local rock music all the way into the the last decade. There was also a virtual lack of a show business industry – there were no savvy producers and no managers. The majority of local bands ended up falling apart due to banal, trivial and minor issues like the total impossibility of earning even a small income through their music – most musicians held menial day jobs, (such as construction work) which predictably interfered with their creative work. Of course, this tragedy is not Odessa’s alone, but it is especially sad and painful to think of all the truly talented and unique musicians and bands that our city created, which faded out far before their time, forever remaining frozen in that time.