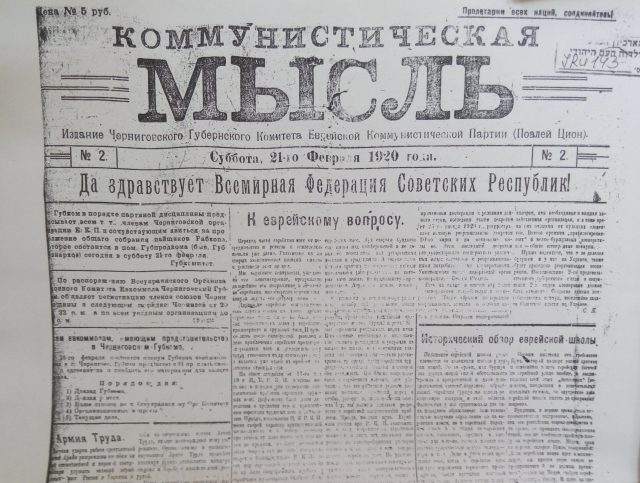 Jewish political parties in Ukraine were partisan, ideological, fragmented, and ultimately crushed. But they left an indelible mark on Jewish history.

The notion of “political party” was poorly suited to the Russian Empire under the Romanovs. Such parties can only truly exist in constitutional parliamentary regimes. But that didn’t stop the empire’s subjects from trying — even if they had to work in secret.

The first Jewish political organizations emerged in the western Russian empire at a time when other ethnicities and Russian émigrés were beginning to form their own parties. In 1881, the Hovevei Zion (“Lovers of Zion”) organization — a proto-Zionist proto-party — was born. It joined the ranks of the non-Jewish “People’s Will”, established in 1879, and the Marxist “Liberation of Labor” group, started in 1883.

But the first “Palestinophiles” had one radical difference from non-Jewish organizations. Unlike other parties, they did not seek to change the system of social and political relations in the empire. The life of Jews in the diaspora was of interest to them only because they considered it abnormal. They wanted to bring the Jews back to Palestine, thereby evacuating them from a hostile environment. The same was true for such proto-Zionist organizations as Bilu (first based in Kharkiv, then in Odessa) and the Odessa Committee.

And the situation didn’t change after 1897, when the Zionist Organization was founded at the First Zionist Congress in  Basel and its branches started appearing in Russia. But the very fact that its leaders wanted to bring significant numbers of Jews out of Russia had political significance: the Zionist press raised burning political issues and the Zionist activists’ complicated relationship with the imperial authorities in St. Petersburg made these organizations prototypes of future Jewish parties.

If the first such Zionist organizations were based in the Ukrainian and Polish provinces, the center of anti-Zionist Jewish politics was the northwest: modern-day Belarus and Lithuania. In 1897, a party emerged in Vilno — today’s Vilnius — that would become the Zionists’ main competitor: the Common Jewish Labor Union, more widely known by its Yiddish name, the Bund.

During its first years, the Bund wasn’t a party in the narrow sense of the word. Rather, it was an umbrella organization uniting Jewish trade unions  in  regional  industrial centers. But as the trade unions began advancing political slogans alongside economic  ones,  the  Bund  transformed  into   a party. Moreover, it became the foundation for the creation of the Russian Social-Democratic Labor Party (RSDLP) a year later and formed an autonomous Jewish section within it.

As an organization, the Bund was innovative. Before they were ever picked up by Russian social democrats, the Bund had tested the entire arsenal of methods for political and economic self-organization: strikes, mutual benefit funds, boycotting unfair employers, and disrupting the work of replacement workers.

After launching its activities among the largest concentrations of Jewish workers — Vilno, Minsk, Bialystok, and Warsaw — the Bund  began  creating  its  organizations  on Ukrainian lands as well. However, here it faced opposition not just from the main faction of the Zionist movement, but also from another political organization: the Jewish Social-Democratic Labor Party, or Poale Zion (“Workers of Zion”). This party was founded several years before the revolution of 1905 in the city of Yekaterinoslav (today’s Dnipro) and aimed to create a synthesis of Zionism and Marxism. Its branches soon appeared in other Ukrainian and Polish cities.

These three political movements were divided by their goals. Zionists primarily aspired to organize the exodus of as many Jews as possible to Palestine. Their most popular idea at the time was creating Jewish agricultural colonies in Palestine and preparing Jews to move there. They considered improving the lot of Jews in the diaspora neither necessary, nor possible. Some Zionists even feared that such improvements would make the Jewish poor hesitant  to  leave.  But Zionists were not entirely escapists.

Although they did not believe it important to participate in the empire’s civic life, they did support the Constitutional Democratic Party during elections to the State Duma.

By contrast, the Poale Zion ideologists saw Jewish emigration to Palestine as a very far-off possibility. They believed improving the economic situation for disadvantaged Jews and defending their cultural interests must be immediate priorities. As a result, a segment of Poale Zion supported the idea of Jewish national autonomy in the diaspora. Moreover, Poale Zionists saw a different Jewish future in Palestine than most Zionists. They believed that the arrival of Jews there would influence the local Arab population and provoke a Middle Eastern labor movement.

In their agitprop, Zionists largely used Hebrew, and treated Yiddish  with  contempt as a symbol of exile. By contrast, Poale Zionists considered Yiddish one of the Jewish national languages, alongside Hebrew. In fact, one of Poale Zion’s founders and its main ideologist, Ber Borochov, today is even better known as a linguist and the “father of Yiddish philology” than as a political leader.

By definition, the Bundists did not support Aliyah (emigration to Israel), so national autonomy in the diaspora was at the heart of their program. They saw Yiddish as the only national language of Ashkenazi Jews. However, the Bund was similar to Poale Zion in its support for closely cooperating with non-Jewish parties to achieve Jewish non-territorial national autonomy.

A fourth political movement — the Jewish People’s Party (Folkspartei) — had a similar position on national issues. Much less nu- merous, it was created by Simon Dubnow, one of the most respected Jewish historians of the time, and enjoyed some popularity in the Ukrainian provinces. Among the most notable aspects of its program was the idea of creating a non-territorial Jewish autonomy on the global level.

Chaim Zhitlowsky, the founder of the Socialist Jewish Labor Party (SERP), also actively supported the autonomy idea. Despite Zhitlowsky’s stature as a political thinker and Yiddishism supporter, the political party he created — mostly active on Ukrainian lands — had only a limited influence. It is, however, interesting for attempting to combine the seemingly contradictory ideas of Jewish autonomy, which focused on the urban Jewish population, and the peasant-centered people’s socialism of the Russian Narodniks.

However, it would be a mistake to only focus on political parties. A non-partisan civil society organization, the Union for Achieving Full Rights for the Jewish People, was also of great political significance. The organization brought together diverse forces: Zionists, mainstream supporters of autonomy (for example, Simon Dubnow), and even assimilationists, who believed the Jewish future lay in rejecting their language and group identity. During the empire’s first State Duma elections, the Union supported the Constitutional Democratic Party, which demanded full equality for Jews. The Bund and Poale Zion, by contrast, boycotted the vote.

Jewish political circles remained this divided until 1917. Then, the revolution forced Jews to implement the ideas of national autonomy in practice. On the legal level, this was achieved in both Ukraine and Lithuania. It is rather telling that the most active supporters of autonomy — in  particular,  the Folkspartei and the Bund — had almost no involvement in its implementation in Ukraine. However, they actively participated in autonomy draft law discussions that took place in January 1918.

Jewish political parties continued to play an interesting role in the early days of Soviet Ukraine and Belarus. Only three Jewish formations received legal standing in the Soviet Union — the left-wing Bund, the United Jewish Socialist Labor Party (UJSLP), and Poale Zion. These movements can be understood as manifestations of Jewish national communism, similar to Ukrainian national communism.

And the fate of Jewish national communists was very much like that of their Ukrainian counterparts. The Bund merged with the UJSLP to form the Communist Farband, and later was taken over by the Bolsheviks. The former leader of the Bund in Soviet Ukraine, Moshe Rafes, turned into a hardliner. The left wing of Poale Zion split up into the more radical Jewish Communist Party — taken over by the Bolsheviks in 1922-23 — and the more orthodox Jewish Communist Labor Party. The latter was destined to become the last legal non-Bolshevik party in the Soviet Union. It was destroyed only in 1928.

Throughout the early 20th century, Jewish political parties on Ukrainian lands experienced even wider stratification than Ukrainian ones. The divides between autonomists, Zionists, and assimilationists were greater than anything seen among their neighbors. Yet the parties existed, functioned, and even arranged fruitful cooperation with non-Jewish political groups.

Serhiy Hirik is a historian and a senior lecturer at the MA in Jewish Studies program of the National University of Kyiv-Mohyla Academy. He is also the secretary of the Ukrainian Association for Jewish Studies.