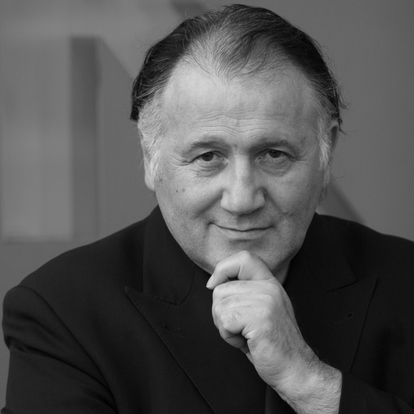 Peter Weibel is an artist, curator and art theorist. In the 1960’s, Weibel played a key role in the Viennese Actionism art movement, which was aggressively reinventing art and seeding the ground for new styles: conceptual art, performance art and experimental film. His performance with Valie Export — “Aus der Mappe der Hundigkeit” (“From the Portfolio of Doginess”) — as well as his numerous experimental films and media installations turned Weibel into one of the prominent figures of European avant-garde.

Born in Odessa in 1944, Weibel grew up in Austria. He studied literature, medicine, logic, philosophy and film in Austria and in Paris. He wrote his doctoral thesis on mathematical logic. As a theoretician of art and the media, Weibel has taught at numerous universities, including Universität für Angewandte Kunst in Vienna; the Nova Scotia College of Art and Design in Halifax, Canada; and the University of Kassel in Germany. He took part in the infamous “Destruction in Art” Symposium in London in 1966 along with like-minded artists such as Gustav Metzger, Otto Muehl, Wolf Vostell and Herman Nitsch. After many years of enjoying a prominent career as an artist, Weibel chose to devote himself to curatorial work. But he remains an active participant in the European art scene and continues to play an important role in reestablishing the equilibrium between Western and Eastern European Art.

The Odessa Review (Anastasia Melai): First off, I would like to ask you about one of the latest exhibitions here at the Center for Art and Media (ZKM), “Art in Europe in 1945-1968”, which mainly focuses on Eastern [European] art. What was the initial idea for it?

Peter Weibel: This idea came from the Pushkin Museum in Moscow. They wanted to do a show about Europe, East and West together, between 1945 to 1968. It started at the BOZAR [Ed: The Paleis voor Schone Kunsten or Palais des Beaux-Arts is often referred to as “Bozar” museum] in Brussels, then it came to us at ZKM and then to Moscow. I am very, very happy that Moscow is participating because, at the moment, we have a struggle: what is Europe, what is the European Union? For me, there is a difference. Even after Brexit, Shakespeare is still European writer. And even though people in the EU are against Putin, against Russia, Dostoevsky is still a European writer. So I say religion and politics divide people and nations, but art and culture can unite them. And the subject of the exhibition is really important, because in the history of European art, exhibitions were more or less NATO exhibitions. It was always only Western Europe and America. For 50 years we, had a NATO occupation in art. And I think we need to finish with this separation of the East and West, which was the effect of the conference in Yalta. We have to show that, in both the East and the West, we have synchronous movements. Artists [in both places] want to say similar things.

OR: Is there also a kind of difference in the artists and art itself in the East and the West? Many say that people in the West are more satisfied with their lives and this stops them from creating something really emotional and passionate.

Czechoslovakia, for example, was practically the most advanced film nation. They had an early version of multiscreen, integration between screen and stage, expanded cinema. Poland had wonderful film makers, Polanski, Robakowski. So the invention of media — real media, not the imitation of Hollywood — also came from the East. The East also supported deconstruction, anti-illusion of the media.

OR: Maybe the fact that Eastern Europe didn’t have such a developed art market made artists more honest, and they did not think about the need to sell their art?

PW: Yes, this is the problem that art history is written under influence of the art market. Many wonderful artists were not included in Western books about art. And it will take a long time to make a different history of art. I started it, but Western people will not do it. It should be done by the East. They should say “We are part of European history” and balance the Western style of art history [which] is too much into commercialism and the market, not into science.

OR: Did the specific mentality in Eastern Europe also effect the art created there? There is still a clear difference in style.

PW: This is a difficult moment for Eastern Europe. For a long time, it was under repression. […] But now they have post-totalitarian regimes on one side, market regimes on another. Oligarchs — like [Viktor] Pinchuk in Kyiv and [Roman] Abramovich in Moscow have a very bad influence on the market. These people spoil the system. They create the kind of art market which is only an illusion because it doesn’t have the free exchange of ideas. It is the same monopoly. They monopolize the art scene because everyone wants to be shown by them. And when you don’t want to work for the market, you don’t want to work for the regime, you start working for yourself. This “autofocus” gives you an opportunity to carry out a lot of innovation.

OR: Regarding innovation, what kind of art should private galleries support?

PW: What should be supported: the strength of Russia and the whole of Eastern Europe is scientific art. The convergence of science and art was always the strength of the East and especially Russia. [Dziga] Vertov could have made his “Donbas Symphony” [also known as “Enthusiasm”] an expressionist or impressionist piece, but he made a very scientific and sociological work about steam workers in the Donbas [region of Ukraine]. It was Malevich who compared futurist and cubist forms with industrial forms. He showed this correspondence: the railway was impressionism, the car was futurist, and the rocket was suprematism. He made analogies from industrial work with the artistic world, scientific analyses. [Wassily] Kandinsky wrote the book “Point and Line to Plane”.

The light coming from the East is always analytical light. And I think they should return to this ability. Eastern nations have very high intellectual potential. People from Eastern Europe have a lot of talents. To combine these talents with art would be the solution, but this should not be done by the private collectors. This should be done by the state.

OR: There is also a problem that all the scientists brought up in Ukraine prefer to go to the West because they feel like they are more wanted there.

PW: This is very wrong. Eastern Europe wants to be accepted by Western Europe, they want to be loved by the West. But, in fact, the East should criticize the West. There should be a kind of pride. Eastern Europe always feels secondary, delayed, not good enough. This is the wrong attitude. Eastern Europe has a chance to say: “We are different, and we can prove it”. Not just come and ask for money. It is ridiculous that the government always does this. Eastern Europe should not accept the role of the beggar. If people are satisfied with that, the West will [always] see them as weaker and inferior.