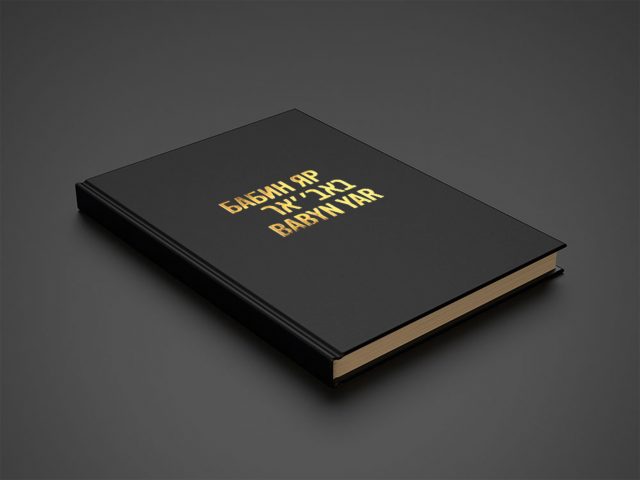 The book “Babyn Yar: History and Memory” appeared just before the 75th anniversary of the tragedy that took place in Babyn Yar during the German occupation of Kyiv. Babyn Yar has since become symbol for the Holocaust as it took place on the territory on the former Soviet Union. Vladyslav Hrynevych, one of the most prominent historians in contemporary Ukraine and co-editor of the volume reflects on the issues that it addresses.

Babyn Yar is a historic place where people have lived since Paleolithic times. Over the 1500 years that Kyiv has existed, Babyn Yar has remained at the edge of the city and been called the “Switzerland of Kyiv” for its picturesque landscape.

During World War II, like Auschwitz in Poland, Babyn Yar became a prominent symbol in Ukraine of the  destruction  of  the Jews of Europe in the Holocaust. The tragedy began in September 1941 with the murder of nearly 34,000 Jews, and continued for the next couple years with shootings of tens of thousands more Jews, as well as Roma, the mentally ill, Soviet prisoners of war, Ukrainian national activists and Communist party members, and Kyiv residents taken hostage, ultimately claiming over 100,000 people. These people were robbed of their individual dignity and subjected to inhuman cruelty and deaths. Babyn Yar became one of the most traumatic sites of the Ukrainian experience of World War II.

Babyn Yar still holds many secrets. The problems associated with academic reflection on the tragedy look as deep, obscure, and prickly as the ravine on the outskirts of prewar Kyiv. Scholars still don’t have definitive answers, and a significant number of important questions are still under discussion. It is not known with certainty when exactly the shootings in Babyn Yar began; who were the first victims; where precisely the Jews were killed on September 29-30, 1941; what the total number of murdered Jews — or Roma, or Soviet prisoners of war and civilians who were the crime’s perpetrators and accomplices; what role “ordinary local residents” played in this; whether the “Ukrainian police”, “Bukovynskyi kurin”, and other divisions of the OUN (Organization of Ukrainian Nationalists) took part in the shootings. And this list of questions could go on and on. In this context, there is speculation in the media, in popular and even academic literature around many myths and outright falsehoods — even going so far as to deny Babyn Yar as a symbol of the Holocaust.

The book “Babyn Yar: History and Memory” appeared just before the 75th anniversary of the tragedy in Babyn Yar, published by the reputable “Dukh i Litera” press with support from the organization “Ukrainian Jewish Encounter” (which is also supporting the publication of this special issue of The Odessa Review). United by a single intention, this collective monograph was the result of collaboration between scholars from various disciplines and countries, including Israel, Canada, the Netherlands, the USA, France. They were compelled by the desire to inform the world about the history of one of the most terrible human tragedies, and also to underline the importance of preserving its memory.

The book can essentially be divided into three parts: “Before Babyn Yar”, “The Tragedy of Babyn Yar”, and “After Babyn Yar”. At the epicenter of the research we have the history of the Nazi crime, the politics of memory and forgetting from the Stalinist period to the present day, as well as the cultural memory of Babyn Yar. The versions of events laid out are supported by existing documentary sources and academic research. Meanwhile, in the authors’ essays one can’t help but notice echoes of discussion, as different authors do not always find common answers to the same questions. This book is a step forward in the process of talking through a trauma (in the historical, ethno-national, artistic contexts) and at the same time, we hope it will provide an analytical base for the search for new meanings of life.

Addressing each subsequent anniversary of the Babyn Yar tragedy allows us to understand that the past is not a static construct, but a dynamic model open to new meanings. Every era and every generation contributes its own vision to rethinking the tragedy of Babyn Yar in various dimensions, including the philosophical-anthropological, the event as such, and its commemoration. Finally, there is a certain generational aspect to the reinterpretation of this tragedy, as every generation does this in its own way. Today those who were born in independent Ukraine are asking questions: What is Babyn Yar in our memory? How does this memory fit into our understanding of the past and the way we envision our present and future?

In Babyn Yar Jews were killed merely for being Jews, Roma for being Roma, the mentally ill for being “inferior and worthless”. Ukrainian nationalists and Soviet partisans were killed for their political views. The memory of Babyn Yar as a Jewish tragedy was suppressed because someone thought this would be “politically expedient”. Behind all these crimes stood the brutal disregard for the key values of human dignity and a person’s right to life. To know and to remember the tragedy at Babyn Yar means not allowing such a crime to be repeated. In the Ukrainian experience, Babyn Yar is also a symbolic farewell to empire and its mythological legacy, a return to the work of sorrow and the formation of a culture of mourning.

And yet, after the 75th anniversary of the tragedy, from the vantage point of the third millennium, we suddenly realize with astonishment that the lessons of Babyn Yar have  not  diminished  in  political,  moral  or humanitarian urgency. The values that seemed paramount and inviolable in post-war Europe — respect for human life and for ethnic and religious identity, the inadmissibility of using war to alter national borders — are again under threat, facing doubt and nihilism. Whether the democratic world will be able, through solidarity and common effort, to stop the appearance of barbarism, is a matter upon which the lives, not only of individual people and countries, but of all of humanity depends. Babyn Yar as a symbol of the Holocaust and other tragedies reminds us of this again and again.

The value of this book, which was published in both Ukrainian and English editions, also lies in the fact that — with the exception of the death camps and primarily Auschwitz, which is the most prominent “place of memory” — people in the West, unfortunately, have only a vague idea of how Jews were murdered in Eastern Europe. The mass shootings of Jews on the Soviet territories occupied by the Germans are less captivating than the terrifying images of gas chambers and crematoria. The same applies to academic research in the West on the events connected with Babyn Yar; remarkably little has been written, and it is relatively new, owing to obvious disinterest and lack of information in the West about the suffering and deaths of Ukrainian Jews during the Nazi occupation.

The book has recently received the award for “Best Book at the Publishers’ Forum – 2017” in Lviv. This is not only a recognition of the professional caliber of those who contributed to it, but also reflects the maturity of Ukrainian society, which out of all the books in competition selected as the winner a book about the Holocaust.

Vladyslav Hrynevych is a professor of political science with the Institute of Political and Ethnic Studies of the National Academy of Sciences of Ukraine, as well as a co-editor of “Babyn Yar: History and Memory”.

The Evolutionary History of the Barbara Bui Design House