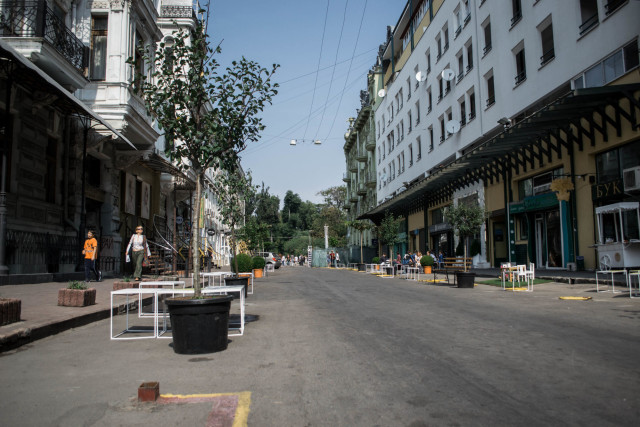 In the middle of September, Odessites were able to witness a unique experiment. “Occupy Zhukova,” an initiative organized by urbanists in the center of the city, was ironically named, since the actual goal was the liberation of the street from cars.

Imagine that you are taking a leisurely Sunday walk with your sweetheart. Or perhaps you are in the company of a couple of friends. Or maybe you are hurrying through the city, going along your business: you literally have to maneuver between the parked cars. You need to bypass them on the sideways, slip between one car and another, while at the same time avoiding hitting another pedestrian or a cyclist. One should forget getting through with a baby stroller — one needs to be desperately bold and ready for acrobatic feats to accomplish that sort of thing. That is for the experts.

Along with the support of Impact Hub Odessa and Green Theater, the organization “Urban Inst,” radically transformed for the duration of one weekend the public space of the Vice-Admiral Zhukov alley which connects Deribasovska and Hretska streets. The removal of the usually entrenched illegal parking on the street was managed by means of a formal order of the mayor’s office (which had been in the works for six months) and maintained by a police guard that for two days did not allow cars to pass into the area of the “Occupy Zhukova” initiative. In place of the usually parked cars, the urbanists put in place artificial lawns and trees in pots. As it became painfully evident once the cars were removed, there was no greenery at all in a 250-meter long alley.

The Vice-Admiral Zhukov alley was transformed into a wide pedestrian street, with comfortable outdoor furniture where one could relax, wait for friends or drink a coffee in silent contemplation. The lane immediately acquired a European look, and photos of the experiment in social networks prompted the question “what city is this?” Even lifelong residents of Odessa did not immediately recognize this unfamiliar space.

One of the most obvious results of the experiment was that the alley attracted people like a magnet. In the course of about 8 hours, more than six thousand people passed through it, rested on the furniture or made little picnics on the lawns — on regular days, there are about 35 cars parked here. The income of the businesses, shops and cafes located along the street tripled during those two days of the initiative, because their storefronts became much more visible to passersby.

The pilot project “Occupy Zhukova” is a start to the development of the city’s pedestrian strategy. ”Odessa is a tourist town, so the development of comfortable public spaces is essential. We decided to start with a specific small case, instead of launching into a large-scale concept that would be difficult to implement. The Vice-Admiral Zhukov lane in the center of the city and it is very indicative of Odessa. Many residents asked us to extend the experiment for another week and we were excited to know what’s next for Occupy Zhukova,” says one of the organizers, the urbanist Konstantin Emelyanov.

Now the project team is working on summarizing the results of the experiment and preparing a public presentation, as well as communicating with the residents and businesses of the alley — they are the ones who will have to decide if they want to have their street remain liberated of cars forever.

Iryna Kyporenko is a journalist living in Odessa.