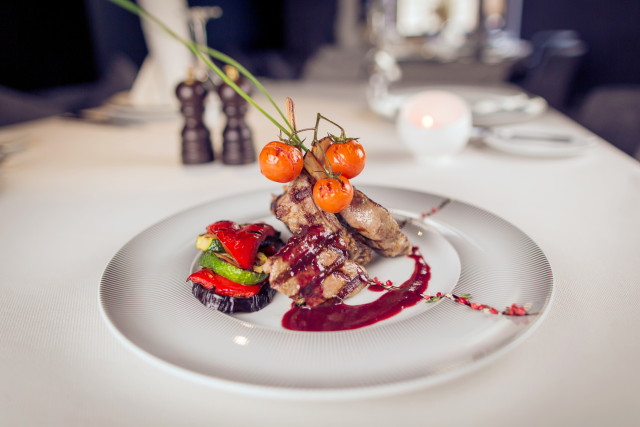 This June 6th, the LenMar restaurant located inside the lobby of the five-star Hotel Duke will be celebrating it’s two year anniversary. Like any anniversary, this one offers a valuable opportunity to take stock of the quality of this hotel restaurant found to be cheek and jowl with the Opera house. The Hotel Duke opened two years ago in a restored historical building, and since then become a favorite among both local foodies and visiting gourmands. There is a tradition of the best bars and restaurants in any given European town being attached to luxury hotels – and hotel establishments are usually visited much more frequently by tourists than they are by local residents. However, despite being somewhat hidden from the casual ambulating tourist on the street behind the Opera house, LenMar makes a departure from the type. Local residents with refined culinary taste are frequent guests during the lunch service and are amply represented at dinner following a show across the street.

The décor is Italianate neo-baroque revival, and a live piano (mercifully pitched at the correct low key unlike many places in the Post-Soviet space) also sets the mood for a festivities. The décor is Odessa-themed throughout: the wallpaper running all along the hall is an old map of the city, and historical landscapes decorate the opposite side of the space.

The restaurant’s great attraction is the open kitchen. One of the more charming aspects of the space is that during the summer, one can sit on the terrace and enjoy the sound of arias emanating from the back windows of the Opera House, as the singers rehearse in the back part of the building. This is part of what makes LenMar an appropriate place for an informal first date, a Sunday family lunch, or casual drinks with friends.

The menu is varied – but builds on a Mediterranean base with dishes mingling classic favorites with a Odessan kitchen. Some of the restaurant’s great favorites are the baked black cod in a complex sauce and the spicy fish tartare (choice of salmon or tuna) served in oyster shells on a platter of ice with liquid nitrogen. Also to be found are the familiar, traditional dishes from the Odessa table – like the authentic, old-fashioned Forshmak. The head chef complements every meat dish with a house sauce – these include a black-pepper based accompaniment for the calf kare with vegetables and the decadent wine and berry sauce for the Foie Gras duck breast.

The menu is also complemented by the extensive wine list, which is accompanied by a dedicated in house Sommelier. The LenMar dessert menu is also worth a mention – one can find classic favorites like the tender cream panna cotta with fresh berries, or the Vienna strudel a la mode with vanilla sauce. The pastry-chef’s also enjoy experimenting with recipes. One of these creations, the iced nougat with crispy caramelized nuts and a sweet and sour berry sauce, was meant to be a limited edition item on the spring menu but was popular enough to be added to permanent menu.