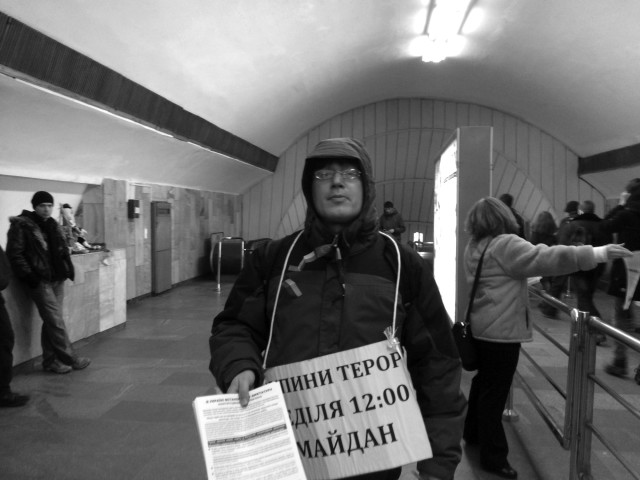 Orest Subtelny, who passed away at the end of July, was perhaps his generations most prominent historian of Ukraine. His work reinvigorated the discipline and influenced a generation of East European historians and practitioners of Slavic Studies. William Risch was inspired to enter the profession after reading Subtelny’s seminal 1988 work Ukraine: A History. He remises about the way in which his encounter with Subtelny’s work set him in the direction that saw him ending up writing about Lviv and volunteering on the Maidan.

It was May 1990. I was in my third year at Hiram College, a college of some 800 students in a village outside of Cleveland, Ohio. I was an English Literature major and I had plans of attending graduate school to become either a professor of English Literature or perhaps to do something else.

That “something else” to which my interest was increasingly turning was Russia and Eastern Europe. That whole academic year had been drawing me to that part of the world. In part, this was due to my family history. In September of 1989, my father, who had been born in Latvia before World War II, and had been given up for adoption in Germany, met his biological mother, who had been born in St. Petersburg, Russia, during the Russian Civil War. In part, it was because Eastern Europe and Russia were taking center stage in the world news. Communism had abruptly ended in Eastern Europe. The Berlin Wall had come down. In the Soviet Union, the Baltic state of Lithuania had declared independence, Latvia would soon follow, and the Communist Party was about to relinquish its monopoly on power.

I decided to focus on Russia and Eastern Europe’s history. My college did not have any courses in Slavic languages. Nor did it have any professional historian who specialized in Russia, but in the spring of 1990, I took a fascinating course in Soviet political history with a Ph.D. student temporarily lecturing at Hiram. We had a retired historian of modern Germany who read the Russian language and whose survey on Modern Russia I had taken in my first year. He agreed to tutor me in Russian for reading knowledge once I took a beginning level course in Russian at nearby Kent State University over the summer.

My college also had no one who specialized in Ukrainian history or Ukrainian studies. In my first year, the Harvard historian Ihor Shevchenko came to give a guest lecture, but it was on Byzantine studies. At the end of the 1980’s, Ukraine simply did not exist for some faculty members. I remember that in my Modern Russia class in the winter of 1988, someone had written “UKRAINE” in white chalk across the southwest part of a map of the Soviet Union hanging in the corner. The rumor was that an English Literature professor who taught a class in the room had scoffed at the graffiti: “Some Ukrainian nationalist did that!” he told my friend at the beginning of class as the other students laughed.

I only started considering Ukrainian history as a subject when, in May of 1990, I saw a new book, Ukraine: A History, by Subtelny. It was a large book with a dark blue cover, decorated with a modernist painting of a Bandura player at his instrument. It was on the book shelves for new books near the circulation desk. Most likely the Byzantine art historian who had invited Ihor Shevchenko had bought it for the library.

I was tempted to read it right away. My Soviet political history class had turned me to questions about the Ukrainian Famine and Nikita Khrushchev, one of Soviet Ukraine’s Communist Party leaders. Still, I had not given up my plans to go into English Literature. When summer came and I started studying Russian, I borrowed the book and began reading it. I had pangs of guilt. Shouldn’t I be reading The Norton Anthology of English Literature, as I had originally planned to do? There was the GRE graduate exam in English Literature that I needed to do well in.

Subtelny’s book was one that I could not put down. It put Ukraine’s development into a comparative framework. It talked about Ukraine being the size of France. It saw its industrial might as being equal to that of West Germany. Most importantly, though, was the story it told about the emergence of the Ukrainian national ideal. Having little background in history, I was greatly intrigued by this idea that nations were historical, that as in other parts of Europe, identities shifted from those held by specific social estates – the nobility, clergy, commoners – to those of the coherent nations.

The emergence of a social and political movement cobbled together out of diverse cultural developments in the Austrian and Russian empires fascinated me. I distinctly remember reading those chapters on the nineteenth century Ukrainian national revival on an American Independence day trip July 4th, 1990, that my friends and I took to the Blossom Music Center for a performance of the Cleveland Symphony Orchestra that was followed by a fireworks show. The Ukrainian writers and historians’ calls for greater rights for their oppressed people reminded me of the struggle of African Americans for greater cultural diversity on college campuses, another important development taking place during my third year at Hiram. Movements such as the Ukrainian national revival challenged the stability of states and empires in the modern world. I felt that I had to study the history of Russia and of the Soviet Union through the lens of a particularly European empire of nations, not merely because of my Baltic heritage, but because the Ukrainian national movement had critical implications for an empire that was literally in its last full year of existence.

By the end of the summer of 1990, I had made up my mind. I had decided to go to graduate school in Russian and Soviet history, and I was going to look at the politics of empire. I began my graduate studies at The Ohio State University in the fall of 1991. At the end of that first quarter, the Soviet Union had crumbled. Our last class in our graduate seminar in Russian and Soviet history met on the day that the accords negotiating the end of the Soviet Union were signed by the leaders of Russia, Ukraine, and Belarus. One of the students in my seminar, a man of Russian descent said “Forgive me if I’m biased, but I always thought of Kyiv as our city.”

By that time, I was sold on the idea of doing my Ph.D. in Soviet history, specializing in Ukraine. It meant there were many years of hard work ahead. I had to master Russian, and then Ukrainian, before I could do any research in Ukrainian history. Eventually I got my Ph.D. in 2001. My dissertation became my first book, The Ukrainian West: Culture and the Fate of Empire in Soviet Lviv, published by Harvard University Press in 2011. I taught at the Lviv National University for two years before getting a permanent job in the United States. At the end of 2013 I became involved with the Euromaidan protests as a participant-observer in Kyiv, Donetsk, and Kharkiv. I witnessed the last day of peace for Ukraine, January 19, 2014, on the Maidan, and found myself just up the hill from the violence on Hrushevsky Street that had changed the trajectory of Ukraine’s history in a single night. When the war broke out between Russia and Ukraine, I spent a semester without pay helping the Ukraine Crisis Media Center and Euromaidan Press spread the news about Ukraine in English. I also began working on a book on the history of the Euromaidan protests and their aftermath.

I only had occasional contacts with Orest Subtelny, the man whose work would shape the trajectory of the rest of my life. I called and emailed him several times regarding my research and the publication of my Lviv book. The only time I spoke with him was in late August 1999, after attending his presentation of a paper on Ukrainian collaborators and the Final Solution at an international conference of Ukrainianists in Odessa. Yet it was his great book that turned me on to Ukrainian history and which physically drew me into Ukraine’s current events, to observe history in the making, with my own eyes.

William Risch is an Associate Professor of History at Georgia College in Milledgeville, United States of America.