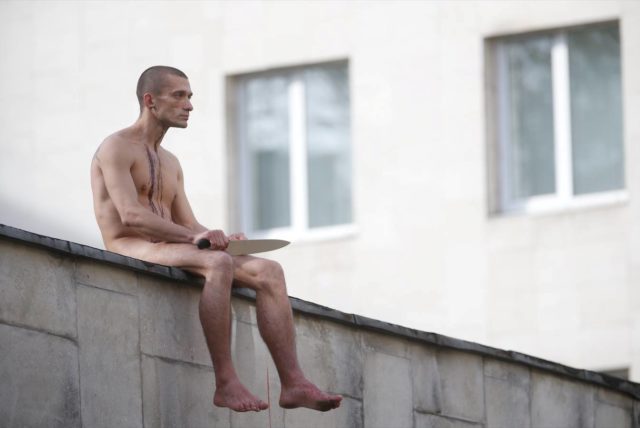 Russia’s best known contemporary artist arrived to deliver a lecture to an over filled hall in Odessa’s Impact Hub on Friday night. He was ascetic, strikingly skeletal, possessed of an undeniable dignity and bearing. Hundreds of people excitedly packed the lecture hall, this was widely expected to be the event of the summer. Petr Pavlensky was newly freed from a Russian prison cell in the wake of becoming a dissident cause célèbre for having set the doors of Moscow’s infamous Lubyanka prison on fire. The lecture’s title was a double entendre that translated roughly as the ‘usage of a person’ or the ‘consumption of people’, hinting broadly at the theme of mechanized cannibalism. However fittingly, this electrifying lecture calling for wide scale resistance to tyranny and the everyday deployment of the mechanisms of social oppression, concluded in violence. Somewhere , one can imagine Mayakovsky smiling.

The artist spoke rapidly, in fully formed declarative sentences weighted with the moral fervor of a mystic or fanatic – and also marked by the sort of saintly simplicity that is borne of being utterly unplagued by internal doubts. As he spoke, Pavlensky quickly flipped through a power point presentation of woodcut prints of medieval tortures, gruesome pictures of Russian prison, images of his actions and documentation from his various court proceedings. He explained the connections between state methods of control and that of the bureaucratic act of naming; the ‘Panopticon’; and the mobilization of medicine for both the naming our pathologies and the pathologizing of our names. The state has manifold resources and limitless funds to harness the individual with administrative, legal, political, military regimes under it’s control. Judges, lawyers, clerks, the police are all cogs in an overlapping system of total control.

Yet, as unapologetically theoretical as the lecture had been (‘the system of prisons works on the semantic level’ ) it was also an exercise in the practical application of the discourse of Foucauldian theory to the fight against the Russian state. Pavlovsky explained that his political provocations were meant to elicit a response from the system and to forge artifacts of political documentation of its nature.

Being a Russian revolutionary, it was not more than ten minutes into the lecture before he asked the audience ‘what is to be done?’ Pavlensky’s own uncompromising reply to a state that he views as categorically totalitarian is to literalize the usually figurative academic trope of the ‘inscription of violence upon the body’. Powerless, and bereft of the usual recourses against state power enjoyed by citizens in a liberal democratic polity, he would demonstrate the true nature of the system by committing violent acts upon his own flesh and daring the system in turn to destroy his body. The politics were unambiguously anarchist. He called on the audience to take responsibility for fighting the repressive state unto themselves standing up to the cannibalism of bureaucracy.

‘So what are my tools?’’ he inquired majestically of the audience before showing us photos of ‘ordinary and readily available weapons to be deployed against the state.’ These included twine (with which he had sown shut his mouth), a blade (with which he had sliced himself), a large nail (which he had used to nail his scrotum to the cobble stones of the Red Square) and a canister of gas (used in the Lubyanka incident). The men in the audience emitted a collective groan when the close up image of his genitals with a nail driven through them flashed onscreen. The Lubyanka action had been his most successful work yet, he posited, as the state had collaborated in the creation of the work by creating numerous legal texts and documentation for his trial. The audience applauded loudly after the security camera clip from the FSB building inferno no was played.

An hour of discussion of asestheticised violence concluded with the Question and Answer period which is when the problems began in earnest.

Alexander Roytburd, one of Ukraine’s best known painters and a prominent voice on the Maidan  moderated the evening with probing questions about the difference between rhetorical anarchism and the proper boundaries of art. The futurist free radical who would be the one to tip the lecture over from the realm of theory into practise was a friend of Pavlensky and Roytburd. Vladimir Nestrenko is a well known character in Odessa’s ‘marginal’ underground and art worlds. The question of whether he was merely a drunken lunatic or rather an inspired literal interpreter of anarchist doctrine will doubtless soon be determined by the coercive juridico- bureaucratic structures of the oppressive state apparatus.

A film script writer and sometime journalist, he is known to have worked on some important films and art projects in previous decades. Visibly agitated and inebriated when he arrived, when we were first introduced by mutual acquaintances at the door he had greeted me with a handshake accompanied by aggressive and lewd gestures. He would continue to publicly consume large quantities of Cognac throughout the course of the lecture.

Mr. Nestrenko waved his arms and made numerous attempts to disrupt the question and answer portion of the lecture. These efforts increased during the portion that dealt with the difference between Pavlensky’s ideas of artist political violence and that of 90’s style ‘Actionism’ (which in it’s post-Soviet variant was an art movement with Odessa roots). Roytburd made several tactful attempts to quiet his friend down, but at a certain point, multiple  incensed voices from the audience began to refer to him as a ‘provocatuer!’ The venue’s two security guards moved in and attempted to escort the now out of control Mr. Nestrenko from the premise. At which point he initiated a melee and began to throttle them. A crowd of bearded hipsters, artists and Nestrenko’s own friends knocked him to the floor. After being separated from the guards, Nestrenko stood up and produced a knife, assaulting one of the guards, who suffered cuts to his arm and hand.

Pavlensky, Roytburd and several others than proceeded to bundle their belligerent friend out of the conference hall and fled. The wounded security guard left a trail of splattered blood all along the floor and down the staircase on his way out. The police made no arrests on the premises. In a bizarre and tragic addendum to the story, the second security the two guards, who had not been hurt in the altercation was reported by local television to have suffered a fatal heart attack in the back of a police vehicle immediately after the incident.