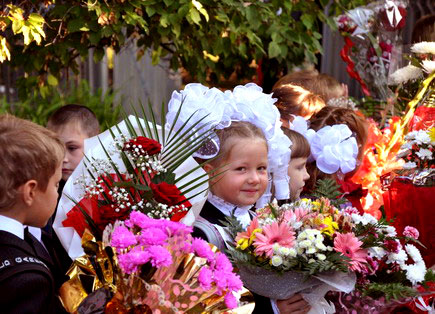 A few days before autumn classes began, I checked the school’s announcement board for the schedule of the first day and noticed a curious flyer. This missive informed parents of a new charity initiative popularly known as “September 1st Without Flowers”. This call to charity was an initiative of the Department of Education at the Odessa City Council. This year, the city recommended that instead of spending money on the traditional flowers that students and parents bring teachers on the first day of class, parents should instead donate these resources to the fighters taking part in the ATO (Anti-Terrorist Operation). The flyer was rather small, not at all aggressive, and there was no specific organization or account number indicated as a preferred recipient of these donations. As I have discovered since, this is the third year the initiative has taken place and apparently it has been gaining a wider following among the city schools over time. My feelings on the matter turned out to be rather complicated.

I must confess that I am not a big fan of September 1st as a holiday. In my family of night owls, the Day of Knowledge, as it is known in most of the post-Soviet territory, is a day of mourning for the summer’s lazy breakfasts, long beach-filled days and dallying evenings gloriously free of homework. Nevertheless, there is also the excitement of seeing friends after a long break, the sparkling new school supplies and the welcome re-introduction of defined and structured schedule for the day. In post-Soviet societies, there are also the various traditional charms left over from Soviet ritual. The enormous white bows on the little girl’s heads, the uniforms and pleated skirts, the sentimental “back-to-school” songs, and the flowers brought for the teachers.

Since the beginning of the conflict with Russia more than two years ago, the definition of what constitutes a patriot, or the obverse, has been thrown into sharp relief and permeated nearly all aspects of social interaction in Ukraine. In Odessa, the issue is further complicated by the special brand of “Odessan patriotism” – that is, the proud insistence on being a patriot of Odessa rather than of Ukraine, in whatever manner that might entail for any given individual. The social turbulence generated by the armed conflict is often conflated with the reformist spirit lately displayed by the Odessa regional government. Over the past year that process has occasionally created a rift between Odessan traditionalists and the proponents of decisive change.

So, as a sum of all these parts, the reaction to “September 1st Without Flowers” has been quite varied. Honestly, most parents, hurried as they are in reading communications from their children’s schools, were probably unaware of the initiative at all. Some were relieved to have an official excuse for crossing one more September 1st related chore (and expense) off their to-do list. There is no doubt that there were many authentic and strong emotional reactions to the way the armed conflict, which should have been over by now, was encroaching on cherished city traditions – moreover, traditions that involve children. However, I seriously doubt that there was a large contingent of parents who estimated how much money they would have spent on flowers, and submitted that exact sum to an ATO charity of their choice…

I believe that those who feel strongly about supporting the fighters in the conflict regularly donate money to the cause, regardless of their daily expenses. I also believe that cultural traditions serve as the unifying glue and the facilitator of communication in societies, especially in times of internal and international conflict. There should certainly be creative and inspiring initiatives in support of the troops that are defending the nation’s sovereignty and territorial integrity, regardless of source of the impulse that had brought them there in the first place. But perhaps such initiatives should not involve diminishing beloved traditions that predate the conflict by decades, and will hopefully carry on for decades after the conflict’s conclusion.

Personally, having grown up in the United States, I do not have a nostalgic attachment to lavish post-Soviet September 1st celebrations and have been known to groan at the prospect of standing in the school yard for an hour, listening to extended speeches and performances. Perhaps these celebrations should really be phased out at some point in favor of more learning-oriented activities on the first school day. Maybe Ukraine should be going in the direction of Western nations on such questions. But these changes should not occur in the context of armed conflict support and should be well thought through. Considering the well known scope of corruption in the national government, holiday flowers might not be the most lucrative option for sourcing financial support for the nation’s troops. There is a fine line between the festive and the frivolous, between good morale and grandstanding. Perhaps the tradition of giving September 1st flowers can be left on the bright side of this line.