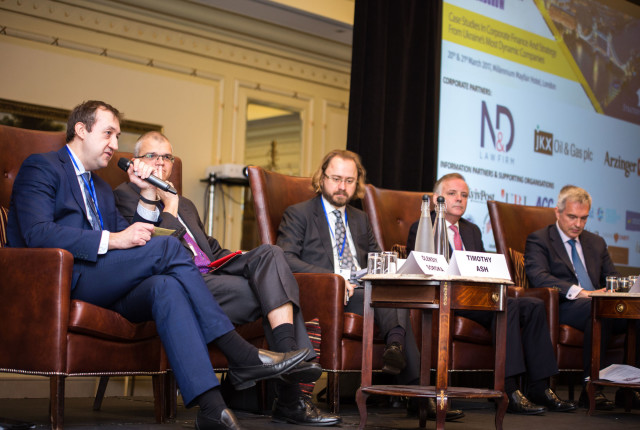 From March 20-21, the Ukrainian Investment Roadshow was held at the Millennium Mayfair Hotel on Grosvenor Square in London. The Odessa Review joined Ukrainian and European entrepreneurs, CEOs and politicians for two days intense and fascinating discussion on foreign investment, domestic and international markets, and positive transformations in specific sectors of the Ukrainian economy over the past three years. The Roadshow gave London based international investors a chance to hear Ukrainian business (from the biggest agriculture concern to the smallest and hippest start up) explain the state of their business and ambitions.

Speakers at the event included representatives from a wide variety of sectors and countries, from Ukrainian tech CEOs to a regional director of a Swiss pharmaceutical firm, as well as board members of the European Bank of Reconstruction and Development (EBRD). The highest profile speakers were former vice prime minister Leonid Kozachenko, who heads the Verhovna Rada Agrarian Committee, the Chief Financial Officer of Allseeds Igor Frantskevych and Deputy Minister of Justice Pavlo Moroz. From the onset, the conference’s tone was optimistic — the speakers being Ukrainians and others who see opportunity and progress despite challenge in Ukraine. In particular, attendees identified an accelerating reform process and broadly increased efficiency in Ukrainian companies as causes for excitement. There was a near unanimous  consensus among the economists in attendance that the Ukrainian economy would be doing well in the next several quarters. The event served to deliver this information to the London financial community, particularly investors and advisors who attended the event. A numerous contingent of lawyers from top tier London law firms was in attendance.

Conversations with the event’s speakers and guests yielded insights into Ukraine’s future growth and positive changes in the Ukrainian economy. This appears to be particularly true in agriculture, where new export markets and heightened appeal to investments promises to drive growth, as is the case in industries such as IT, banking and energy. There was a near consensus that Agriculture is the biggest growth industry in the country, and the sector with the most room for quick growth. Though a lively a exchange took place in one of the question and answer secessions when an analyst for a Eurobond issuer posed questions about the status of property rights and judicial reform in the country,

The Ukrainian Investment Roadshow is yet another in a series of important international events showcasing Ukraine’s increased viability for investment and the accomplishments of young Ukrainian businesspeople. Its location in London emphasized the forward steps currently being taken by Ukrainian industry, and the increasing awareness among international investors and Western European observers of Ukraine’s economic potential.