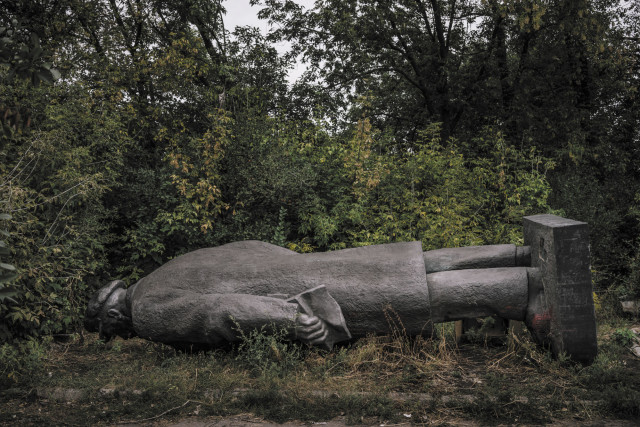 Ukraine’s official efforts at Decommunization were passed into law by the Verhovna Rada in the spring of 2015. Secret security service archives were opened up to the light of day, streets named after Soviet era heroes were renamed after various Ukrainian personalities, some of them controversial. Symbols and relics of the Soviet regime were banned. In fact, all sorts of symbols of the communist era including flags and artefacts were banned. Most symbolic of all was the banning of the statues of Soviet leader Vladimir Ilyich Lenin. The process had first began on the night of December 8, 2013 during the midst of the Maidan revolution, when the anti-government protestors successfully toppled a gigantic statue of Lenin standing in the middle of Kyiv. That statue’s fall was a symbolic start that was replicated in hundreds of cities and villages all across the country, in a process that has taken different forms in different places. The continued process of decommissioning of the statues and the often violent destruction that has accompanied it took place over the course of the last year and a half has been called the “Leninopad” or simply the “Lenin-fall”. Some of the Lenin statues are removed quietly by government authorities, and in some places thuggish groups of vigilante and nationalist oriented young men take matters into their own hands, just as often engaging in violent skirmishes with pro-Russian or Soviet nostalgic locals. The fate of the Lenin statues is a remarkable aspect of contemporary Ukraine. The Swiss photographer Niels Ackermann and the French journalist Sébastien Gobert have been traveling around Ukraine chronicling the “Leninopad” for a forthcoming book.

There is not a single monument to Lenin left standing in Ukraine. According to multiple Ukrainian news agencies, on October 24th, the last standing statue of the Bolshevik leader was removed from the town center of Novohorod-Siverskiy. The felling of the last standing monument of its kind in the country marks an obvious epochal shift for contemporary Ukraine. Yet, the process of Decommunization is far from complete: there remain smaller sculptures and busts here and there. And one should also not forget the monuments still standing in the occupied territories in Crimea and Donbass where a renewed Soviet nostalgia has taken hold.

Yet, the fact remains: Lenin is no longer a part of Ukraine’s landscape. As the scholar and art collector Myroslava Hartmond puts it in her essay in “Minima Ucrainica: “The Mother Goddess archetype that is the Ukrainian landscape is liberated of the host of phallic columns that have sought to dominate her forevermore”. 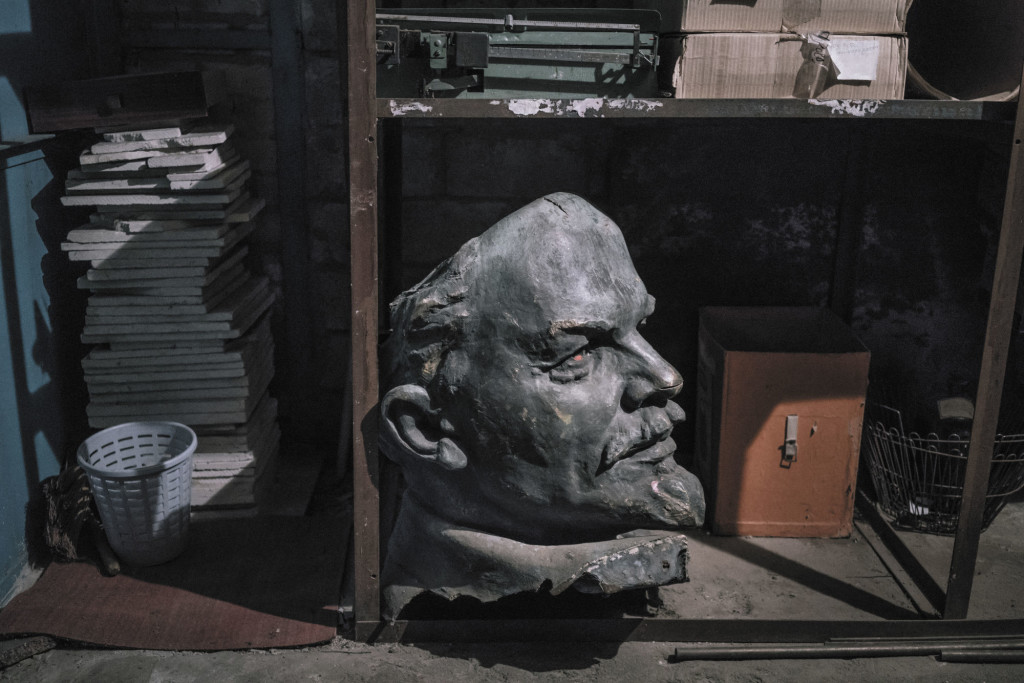 The Leninfall/Leninopad as it is known throughout Ukraine, is a very serious development in the history of the Ukrainian national and state. At the time of the dissolution of the Soviet Union in 1991, there were over 5,500 monuments to Lenin to be found on the territory of the Socialist Soviet Republic of Ukraine. At that time, the comparatively huge territory of Russia was home to some 7,000 monuments to the founder of the Soviet state. This meant that Ukraine had the highest density of “Dyadya Vovas” (Uncle Vovas) on the territory of the USSR. They were usually erected in central squares, to the sight of all, as an unavoidable reminder of the official ideology in the very centre of the cities and villages.

Some see this fact as evidence of the vital importance that Ukraine held within the order of the Union. For other observers this is a sign of Moscow’s in-depth colonization and deep Russification of Ukraine. In any case, the actual historic personality of Lenin is rarely considered in the course of the Leninopad. “He is, rather a nebulous godhead, an embodiment of evil and destruction, his every image an impressionistic collective symbol of what he represents: power, otherworldly and external”,  explains Myroslava Hartmond.

The arguments in favor of the process of Decommunisation are well-know. It is a matter of getting rid of the symbols of a totalitarian ideology, and accepting the existential need to shake off the burden of the past. “He was a dictator who caused the death of millions of Ukrainians”, explains the controversial director of the Institute of National Memory Volodymyr Viatrovych. “The Soviet Union repressed our national identity and tried to tarnish it as some kind of folk culture. They Russified our land and mocked our language. And they are still doing the same again now in Crimea and Donbass”. In the context of a hybrid war being waged by Russia, the process of Leninopad and Decommunization are often perceived as an effort to free the nation from Russian influence.

Yet many questions remain. In fact, the Leninfall has raised more questions than it has brought answers. What does Decommunization mean in practice? How do Ukrainians look at their past? Which elements of a convoluted history are to be included in the national discourse? Which others are to be excluded from the country’s legends?  What should the Ukrainians do with both the image and imagery of Lenin? Where should he go, once he is toppled? What should come next?

The “Looking for Lenin” project that Niels Ackermann and I have been working on since the  Summer of 2015 attempts to provide an extensive picture of the Lenin phenomenon. We traveled all across Ukraine to look for fallen Lenins and reflect on their fates. Niels’ pictures express the contrasting feelings we experienced upon finding these monuments and discussing with different actors and random strollers. 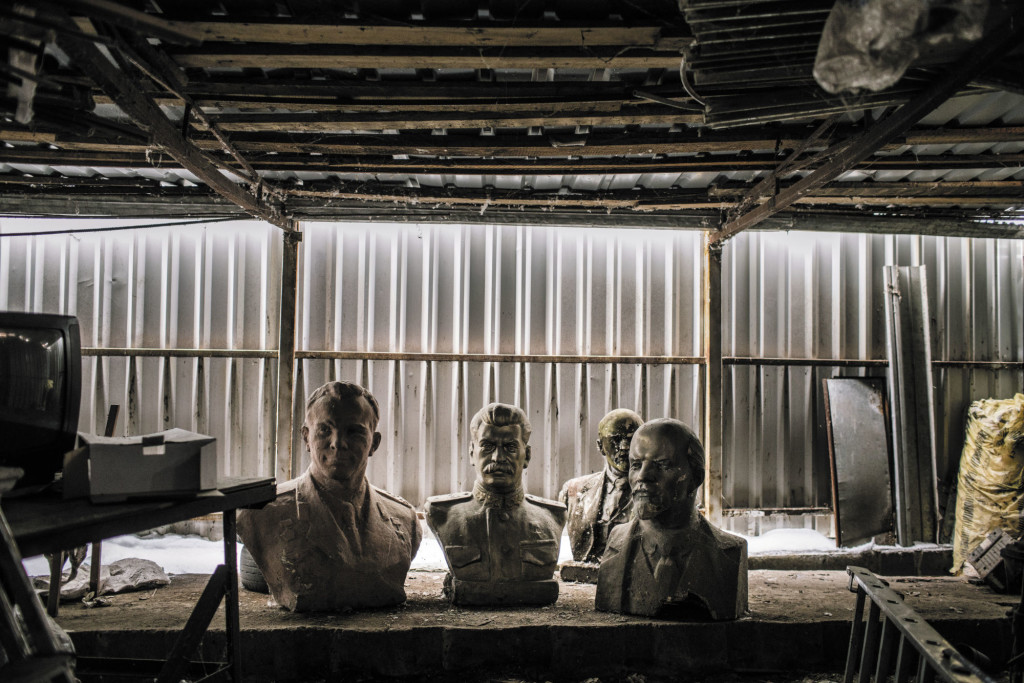 Our working title had originally been “Lost in Decommunisation”. As we discovered in the course of our researches, the Decommunization process has indeed brought confusion and uncertainty to already unsettled populations. Part of the problem comes from the manner in which the process has been implemented. The Leninfall has not always been an orderly or civilized process in every part of Ukraine. On occasion, it has taken some fairly improvised and brutal forms. It has even proved ironic and comical in some ways, as when statues of Lenin are turned into Darth Vador or into Cossack warriors.

There seems to be an serious lack of consensus about what is to be done following the iconic toppling act. Three years after the dramatic fall of Lenin on Bessarabska Place in the Kyiv city center, the pedestal remains untouched, with the name Lenin still apparent on it. No other statue has replaced Lenin and there is no cohesive government policy on what is to replace Lenin after he has been pulled down from the pedestal and the governing ideology. It does not seem as if every resident of Kyiv may take pride in the complete Decommunization of the square. Or of the entire city, for that matter. Again, Myroslava Hartmond finds meaningful words: “The plinth, at once battleground and burial-ground, remains empty: what should replace the downcast idol?” Three years on, the question remains unanswered.

Critics of the way that the Decommunization process has been carried out are numerous. Beyond the sentimental grief and the frustrated resentment expressed all across the country from various nostalgic sectors of the population, generalized political and cultural discontent questions the nature and impact of the process. “Decommunization is being implemented with communist methods”, the Deputy Head of the Department of Construction and Architecture of Kyiv Anna Bondar states. “The administrative apparatus seems keen on following orders without reflecting on its actions.”

“The figure of Lenin is a fair sacrifice on the altar of Decommunization”, the art curator of the Izolyatsia Foundation Evgenya Molyar concedes. “Yet it does not mean that everything Soviet should go. There are some true works of arts that have been produced back in Soviet times, be they mosaics, paintings or facades of buildings. Most of these have lost their ideological baggage over the course of time. We need to show respect for our national heritage”.

Leonid Marushchak of the Crisis Media Center warns of another danger generated by the loss of Soviet landmarks. “Some cities such as Severodonetsk, Lysyachansk and many more were born during Soviet times and were intimately shaped by the Soviet regime’s policies. Taking down Lenin and all the Soviet symbols leaves them with practically no remaining identity marker”. At a time of a hybrid war against Ukraine being fought in the name of a so-called “Russian world”, such a danger should be taken into consideration, according to him.

“The whole debate over decommunization is distorted”, the Lviv-based entrepreneur Volodymyr Vorobey added. “Time after time, our authorities have nothing to say, nothing to offer. They bring up issues of language; history; World War II; of who was right and who was wrong… It’s not going to work”. According to him, the fundamental issue at stake is to redefine the Ukrainian social contract and the understanding of the state. “We need to shake off Soviet paternalism and have people take responsibility for themselves. That would be the real Decommunization”. 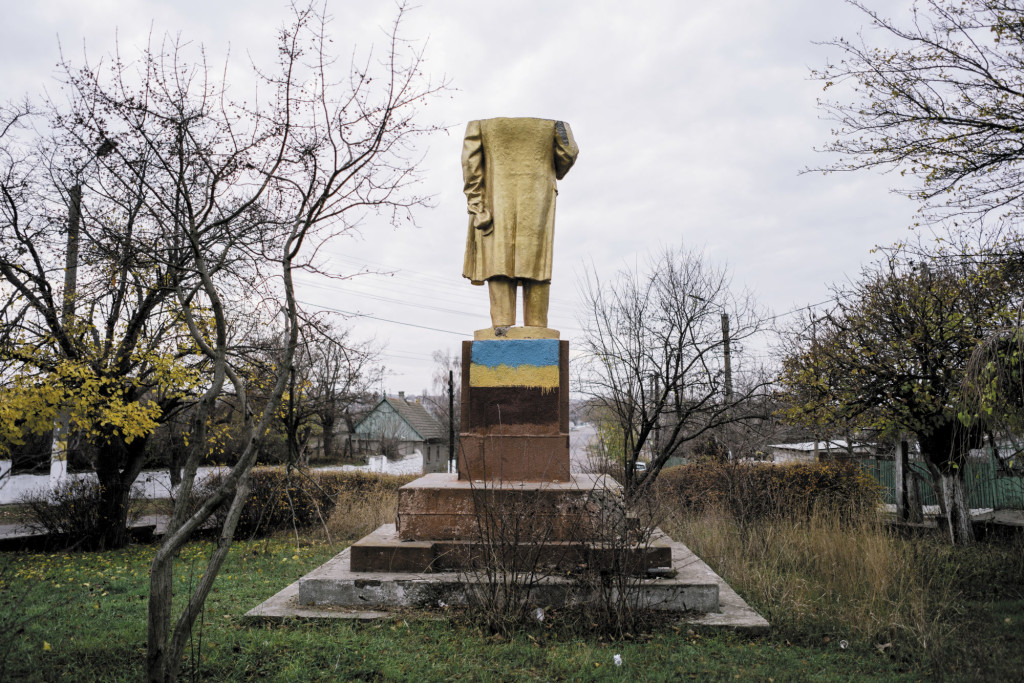 The “Looking for Lenin”  project has allowed Niels Ackermann and myself to understand that both the communist past and the current process of decommunization are perceived in very different ways in Ukraine. It goes far beyond the facile media construct of a so-called East-West divide. From within the same old, staid, differentiated narratives, no new national discourse can emerge. The official allegations that the ongoing war may develop a new national narrative do not seem to produce concrete effects. Nor do the state’s attempts to use nationalist fighters from the 1940-50’s as renewed national heroes. For us “Looking for Lenin” pushes one question ahead all the others: “what will come next”?

Sébastien Gobert is a French journalist based in Kyiv.

Niels Ackermann is a Swiss photographer.

The Odessa Review’s Journalism Seminar And Workshop At Terminal 42