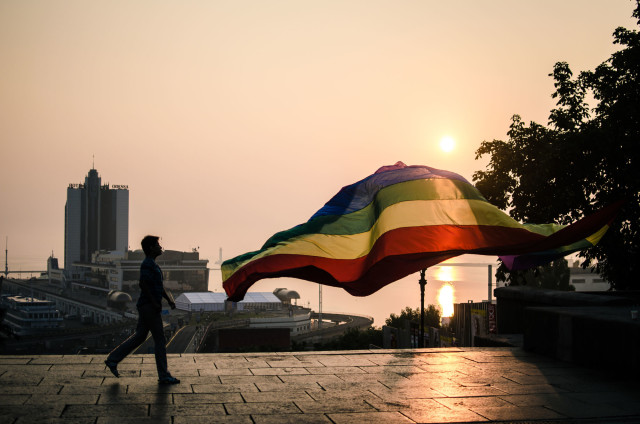 For the  second year in a row, OdessaPride seeks to bring LGBT issues to the public eye in Odessa.

It isn’t easy organizing a gay pride march in Ukraine. Virtually every attempt — successful or unsuccessful — has met fierce resistance from nationalists and religious organizations. And it’s especially difficult outside Kyiv. Only one regional city has successfully held a pride march: Odessa in the summer of  2016. Now the Odessan activists are getting ready to do it again.

That march — and the broader Queer cultural festival OdessaPride-2017, which will be held on August 9-13 — is shaping up to be Odessa’s most important event this summer. That’s saying a lot in a city renowned as a summer tourism destination, where festivals are a kopeck a dozen.

But OdessaPride aims to do something more than entertain: It wants to demonstrate that Odessa has room for all people, regardless of sexual orientation.

On paper, Odessa pride is a simple formula: a series of events dedicated to the rights of LGBT (lesbian, gay, bisexual, transgender) people. It aims to advocate for their social and legal equality, promote tolerance and resist discrimination in society, and increase queer visibility in Odessa.

But in practice, that has proven difficult. In 2015, OdessaPride’s first year, a city court issued a ban preventing activists from holding a March of Equality. The local authorities reportedly feared a violent reaction from the public. Instead, the organizers held a meeting in their headquarters. Nonetheless, opponents from Svoboda, a radical nationalist political party, showed up and pelted them with smoke bombs and firecrackers.

The next year, in an eleventh hour decision, the authorities granted permission, and a small group of demonstrators marched (less than 100, but included editors of this magazine) through Odessa under a heavy police guard. Now, in OdessaPride’s third year, organizers are hoping for an even more successful festival free from violence.

They’ve got big plans, according to Vitaly Tsaryuk, an organizing committee member. This year’s main innovation is the Creative Protest Festival, which Tsaryuk heads. The event aims to teach people to advocate for their rights using innovative forms of nonviolent protest. Ukrainian and foreign instructors will be on hand to help participants harness their individual skills to design an original, creative protest poster. Among the instructors will be Naomi Lawrence, a German artist specializing in gender topics.

While the previous two years featured many lectures, OdessaPride-2017 will focus more on communication and practice. “Getting theoretical knowledge is good, but we now think it’s more important to let people see and hear each other and give them an opportunity to discover and understand those around them,” Tsaryuk says.

Despite widespread opposition to their cause, organizers remain optimistic. In the past, simply arranging OdessaPride was an enormous challenge. In 2015, many potential venues for pride events received threatening phone calls and subsequently declined to have any connection with the festival. In 2016, the organizers barely got their Equality March approved by submitting a request on the night before the event, thereby preventing city hall from suing to block the march.

Challenges and threats have remained constant. This year, in a Facebook post, the Right Sector nationalist political party promised “to do everything possible to resist the negative impact of these grant-eaters” — implying that OdessaPride was an externally funded attempt to impose foreign values on Ukraine.

“In our time, the priority is victory [over Russia], not the problems of sexual minorities,” the group added.

But now LGBT activists are seeing some changes.

In the past two years, the Ukrainian police have proven themselves capable of protecting Pride marches. In 2016, they managed to prevent any attacks on OdessaPride’s March of Equality. And this year, the police successfully guarded KyivPride (this took a massive show of police force) and prevented organized interference by nationalist or right-wing groups. Participants in the 2017 march in Kyiv noted a much more optimistic atmosphere, something that previous years had at times lacked.

But everyone is cognizant of the risks. After KyivPride-2017, some participants were attacked once the event ended, when police officers were no longer nearby.

Organizers stress that a successful OdessaPride would be an important development for the city and for Ukraine. Pride is more than another summer festival; rather, it is an opportunity to increase queer visibility and humanize LGBT people. Stereotypes still abound in Ukraine. Allowing the public to see real gay people marching in public helps them recognize that gays are, first and foremost, human beings.

It’s also important for members of the LGBT community themselves. Although Ukraine is not the worst place on earth to be gay, rights violations remain a serious problem. Many gay people face homophobic aggression, discrimination and even violent hate crimes. For members of the LGBT community — and particularly for queer youth — meeting someone else like themselves can help relieve anxiety, fear, and social isolation. We can only hope the traditional tolerance of Odessa will continue to extend to the LGBT community as more and more local people are educated about LGBT rights.

This article was produces with the support of the Vidrozhenya (Open Society Foundation).

The Architectural And Cultural Treasures Of Odessan Dachas