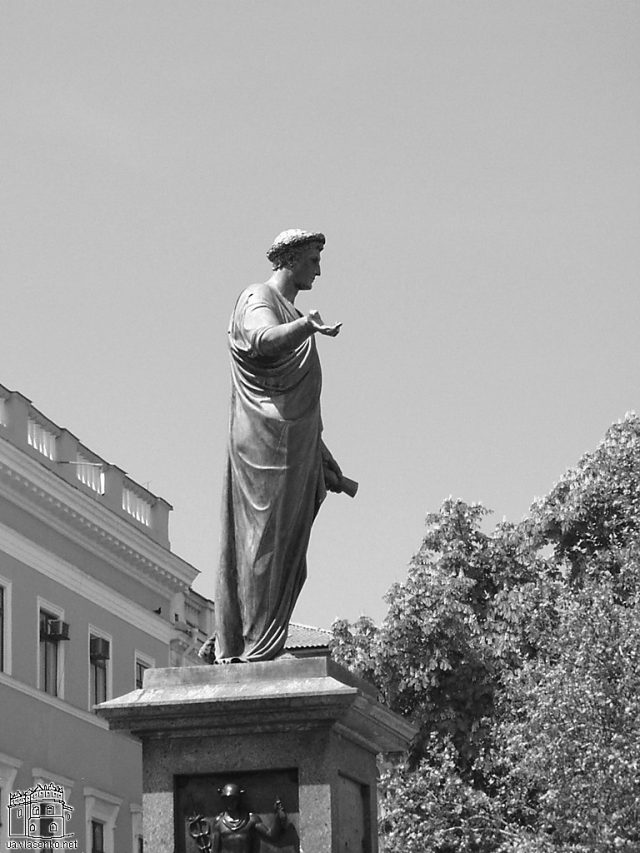 There weren’t many monuments in old Odessa – they could be counted on one’s fingers. Among them, the famous Duc de Richelieu or just simply ‘the Duc”, as he is affectionately known, was and is the uncontested patriarch of our statuary. In the past, not many people were even aware of the significance of the title “Duc”. However, the scroll in the famous Duke’s hand has entered history on two occasions. The graduates of Intermediate Learning institutions subscribed to a superstition that his bronze scroll contained the questions which will be on their final exams.

However, unfurling the bronze scroll, of course, proved impossible. Still, rumored exam themes like Gorky’s “The Mother”, Mayakovski’s “Poem of the Soviet Passport” and such, passed from student to student for years. In some miraculous cases, the rumored themes matched up with the ones on the actual exam papers – evidently due to an information leak from the Local Department of Education. According to the tradition, a “bride” had to be chosen for the Duke. The happily squealing female graduate would be solemnly lifted onto the pedestal reserved for the first governor of the Novorossiya region. One year, at some instance the decision was made to strip the lucky girl nude. This indecent episode would cause the tradition to be halted for many years. Another moment is even more indecent yet. It is a phenomenon that now bears the colloquial name “View of the Duke from the second manhole over”. When one stands on the second manhole over from the monument and observes it from the correct angle, the scroll becomes an obvious phallic symbol, and the Duke himself a variation on the Mannekin Pis. The manhole does not give way under the observer’s feet even after this realization. 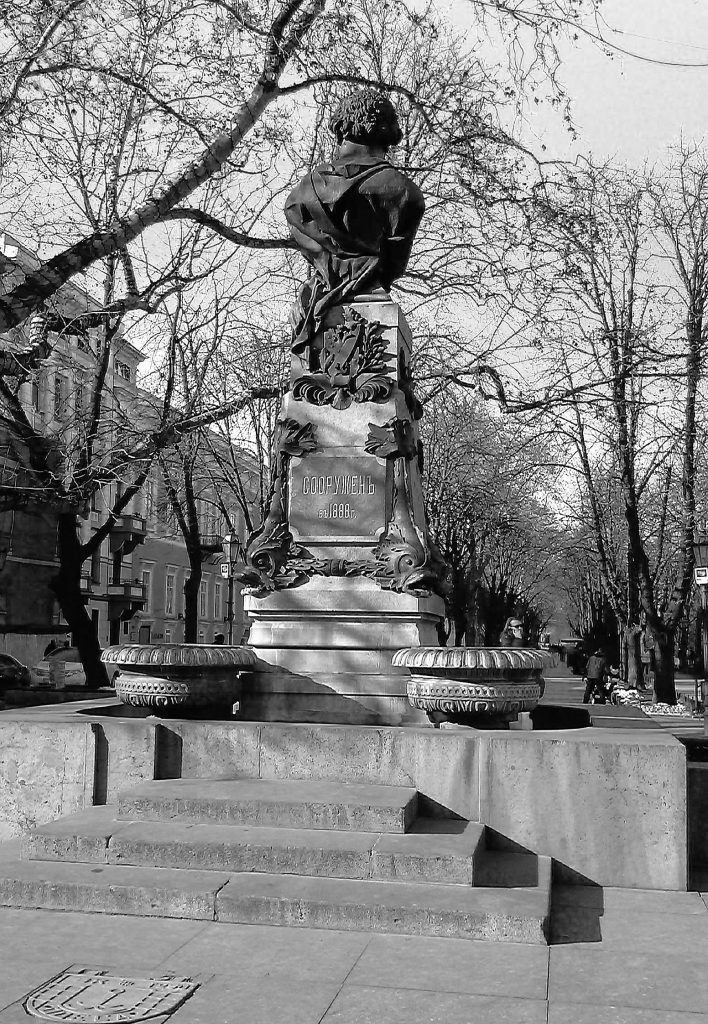 Odessa’s second most important monument is that of the poet Alexander Pushkin, standing with his back to the City Duma in a symbolic gesture of disdain at their refusal to fund his construction. Pushkin has become the proverbial recipient of baseless accusations – “Go get the dead ass’s ears from Pushkin” as the saying goes. Pushkin looms symbolically in the manner of a certain Don Juan character who seduced Elizaveta Ksavierievna, the wife of Prince Vorontsov. A good tour guide will even show you the exact location in the Vorontsov palace where the poet and the princess indulged in their illicit affair. The reality of course was that during Pushkin’s residence in Odessa, the palace had yet to be built. But what does that matter? A myth is a myth. 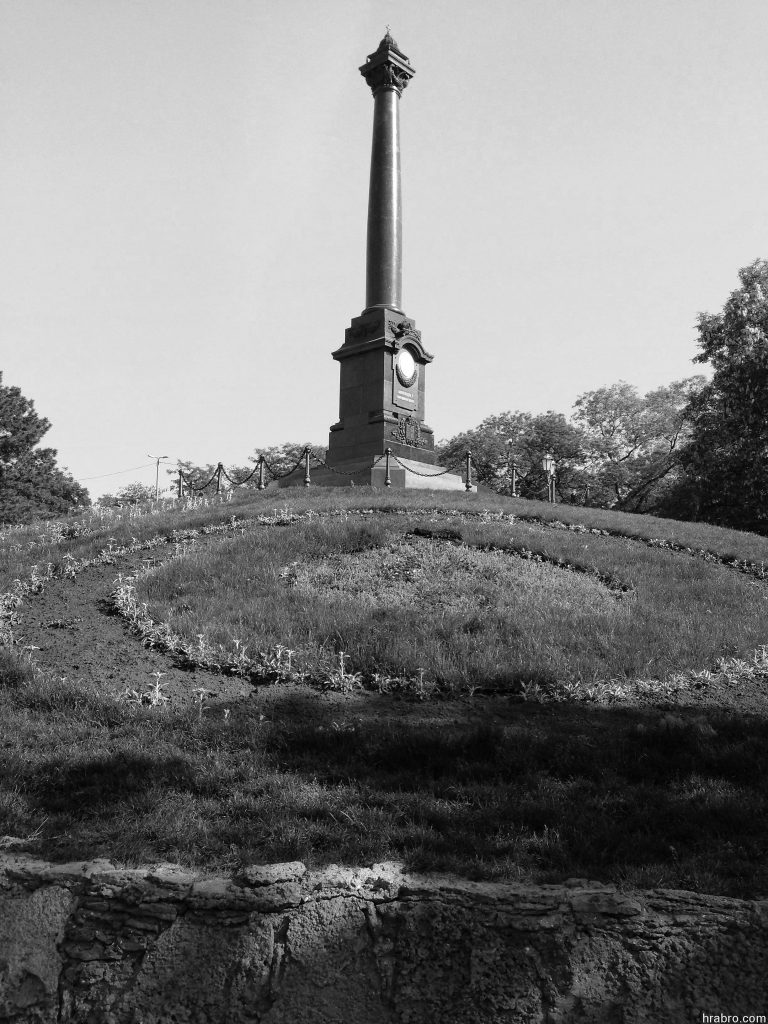 The Aleksandrovskaya column managed to keep its old location in Shevchenko Park, which at one point was known as Aleksandrovsky Park. Still, it was deprived of its crown and a plaque commemorating the “Sovereign Lord.” It is in this mutilated state that I remember it from my childhood. After that, the column was hastily remodeled to honor General Suvorov. That transformation didn’t take much work…now, the column has been restored to its original iteration. Not all monuments managed to survive. I look at Odessa as a sort of chessboard upon which the monuments move around like figures. They are positioned, relocated, removed…how many of these relocations I have witnessed in my years! 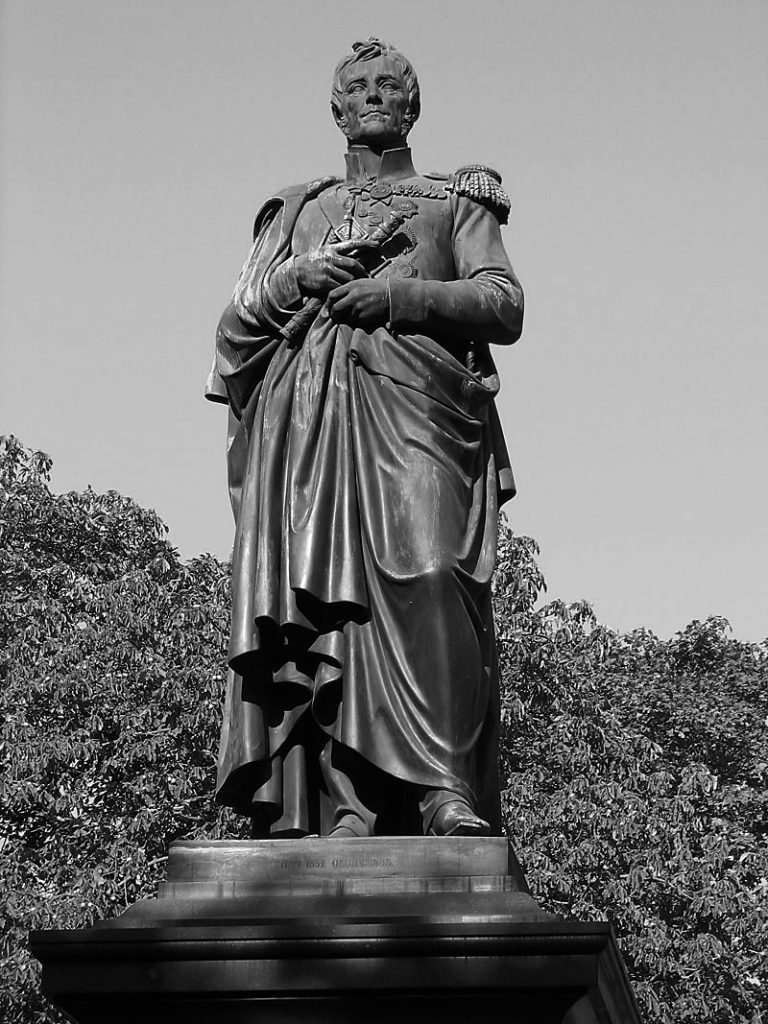 The monument of Mikhail Vorontsov that stood at the Sobornaya Square survived the demolition of the Preobrazhensky Cathedral only through divine intervention. Vorontsov was scheduled for demolition as well, but instead he suffered only the indignity of having his memorial plaque full of praise to the “Most Esteemed Prince..” exchanged for one containing the humiliating epigram composed about him by Pushkin:

Later, this plaque was also removed. I recall another one – with the laconic inscription reading simply, “Vorontsov”. Today, the original version of the plaque has been restored. Meanwhile, Vorontsov’s tombstone was lying near his own palace under a small façade staircase. Later, I recall it being split in two, and after that disappearing – forever and without a trace. Today, the remains of the Vorontsov family are interred in the church crypt of the restored Preobrazhensky Cathedral (to mind, the old cathedral did not have a crypt at all). 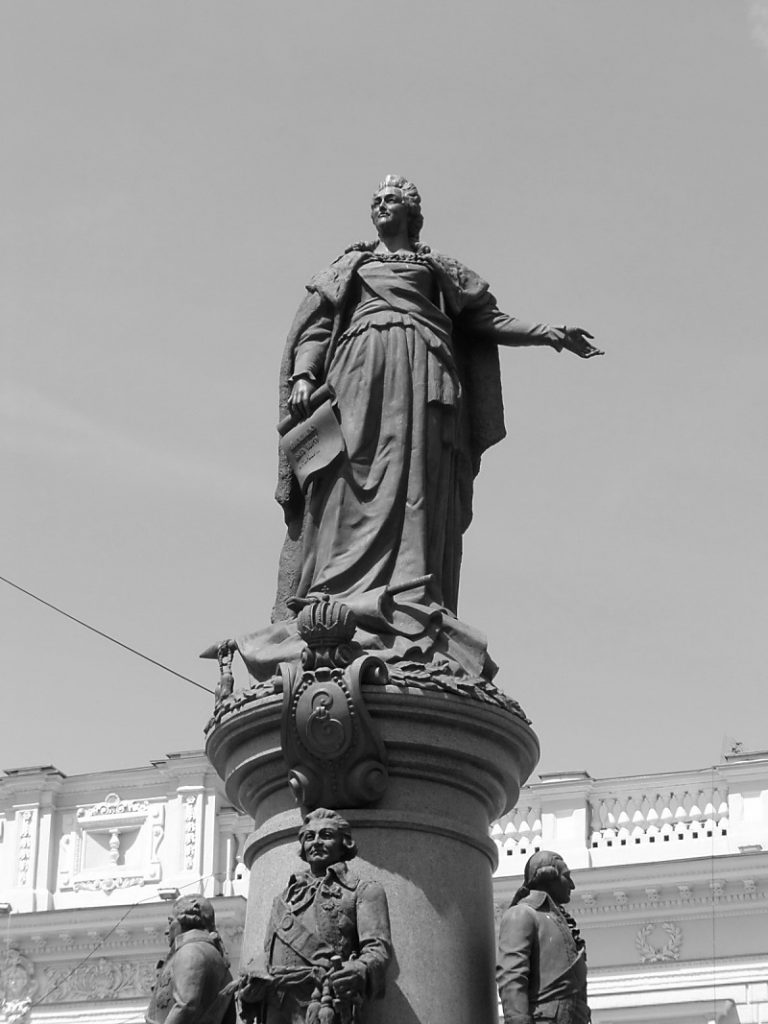 The “Queen” piece on the Odessa chessboard has always been the monument to Catherine the Great and the founders of Odessa on Kateryninska Square. It was erected, demolished and replaced with Karl Marx who was subsequently literally blown away by the wind. Later, the location was occupied by a bust of that same Karl Marx. Some even say there was a fountain there at some point. I myself only witnessed a flower bed there in my time. In recent memory, the horrid Potemkin Sailors monument was erected there, which locals immediately and affectionately dubbed “The Iron”. This latter monument was recently relocated to Tamozhennaya Square, and Queen Catherine regained her place amid a maelstrom of ideological clashing. I still remember the figures of Odessa’s founders encircling the Empress, standing by the wall in the yard of the Odessa Local History museum. At first they were simply left leaning against the wall, as if sentenced to death by firing squad – later, they were mounted on small pedestals in that same yard. Catherine’s top half was left lying in that yard as well. The lower half, which was considered to be the more indecent one, was destroyed…

First, the wind of changes swept away the monuments to Stalin (good riddance!) – I shudder when I recall all those degenerate sculptures. One of them sticks in my mind – depicting Lenin and Stalin calmly discussing the future of electrification; above a flowerbed in which daisies and forget-me-nots form a map of channels linking Moscow River to the Volga and the Volga to the Danube…

Recently, it was Lenin’s turn to become a “dislocated person”. Now all of his busts and effigies are concentrated in one of Odessa’s parks. Before that, they were plentiful and widespread. I remember classifying them with a friend according to type: “City Square Lenin”, “Neighborhood Lenin”, “Resort Lenin”, “Hospital Lenin”, “Factory Lenin”, and even “Yard Lenin”… In recent times, Odessa’s historical center has been showered with new monuments as if from a horn of plenty. Sadly, most of these were unsuccessful and did not prove to be long-lasting. 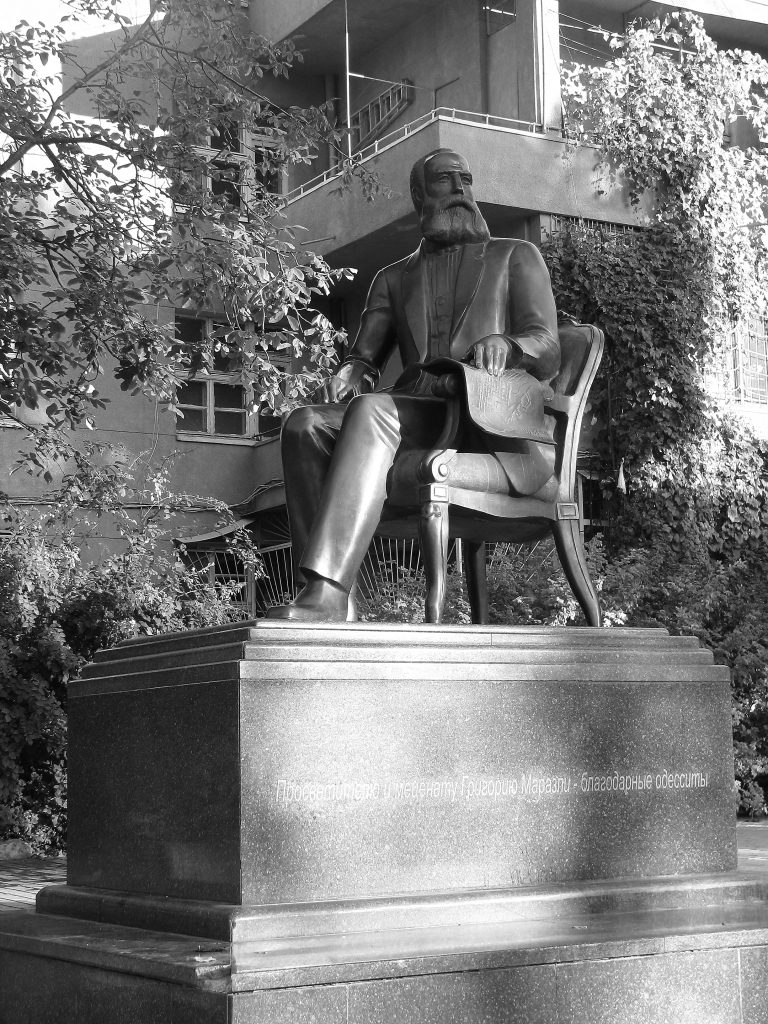 The new monument to Grigorios Maraslis (ed: a beloved mayor of the city of Greek origin) has been relocated from the Hretska street to the Marazlievska Square. It is a quite bad monument on its own, but the construction being erected in its stead is far more horrible. In its former place now yawns an enormous ditch, haphazardly covered by slabs with pseudo-antique designs. The “bribe” monument, however, initially located by the Archaeological Museum has been relocated to the Boulevard of the Arts.

Boris Hersonsky is a physician and poet. One of the most prolific Ukrainian poets in the Russian language, he is the author of more than a dozen volumes of poetry.