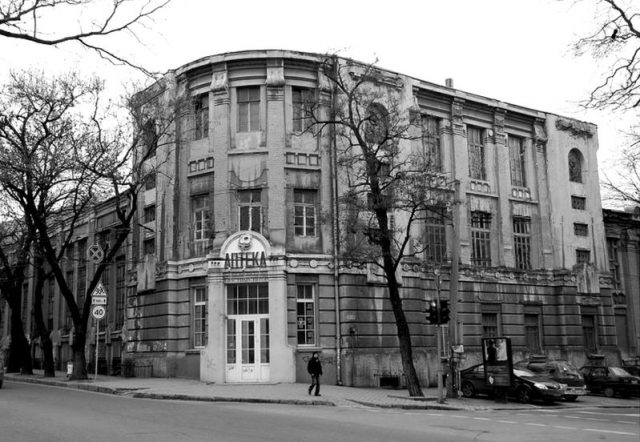 It’s easy to overlook Odessa’s Kanatnaya Street. As one of the busiest and longest roads in the city — packed with food shops, cafes, schools, and government buildings — Kanatnaya gets lost amid the overall hustle and bustle of the city. Few people actually pay attention the buildings along this street — and that’s a major loss. Kanatnaya Street features the first example of brave Art Nouveau architecture in the city.

This building is popularly known as the tea factory, the tea-packing factory or — more fancifully — the house with copper flowers. Admittedly, it has seen better days. Today, the walls are faded and shabby and its windows are broken. But the building has a fascinating and important history.

Architect Tsezar Zelinsky built the structure in 1892 for the Smirnov tea-packing factory. In 1910, it was reconstructed for Wissotzky and Co., another tea company, based upon the design of Volodymyr Kundert. Today, it is difficult to recognize the value of this edifice or even to believe that the building broke with the street’s general architectural ensemble. But it was indeed a unique construction.

Despite the architects’ prodigious talents, industrial pragmatism likely played a greater role in the building’s design. In fact, the building provides a strong example of the unity of beauty and practicality — the main ethos at the turn of the 19th century. The building’s industrial purpose called for a spacious room that could fit more than 300 people. And that requirement also allowed for architectural experiments. Special equipment and machinery went inside the building, while the outside incorporated new artistic techniques: large windows, mosaic panels and plant ornamentation that works in combination with intense green, yellow and copper. We see clear connections to Art Nouveau, which was at peak popularity at the time.

Today, the tea factory continues its manufacturing work thanks to the Wissotzky family company in Israel, which distributes worldwide. However, Wissotzky’s presence in Odessa is largely forgotten. There once was a theater, known as the Tea Factory Theater, that helped to preserve the company’s name and story. The theater held numerous performances and also served as a curated art center that attracted many people. But in 2017, the organization left the building after very unfortunate news. Odessa media reported that the entire building complex at the intersection of Karantinna, Yevreiska and Troitska Streets (which also overlap with Kanatnaya) will be demolished and replaced with 7 new apartment buildings. At six to eight stories each, the new buildings will break with Odessa’s broader architectural style.

A unique structure that once distinguished itself from everything else on the street will now be replaced with one more residential complex that destroys the historical center of Odessa by prioritizing quantity over quality.

Of course, it’s not difficult to see how this happened. The tea factory has deteriorated year by year. But instead of being restored to its former glory, it will be destroyed, taking with it memories and stories that few will later recall.