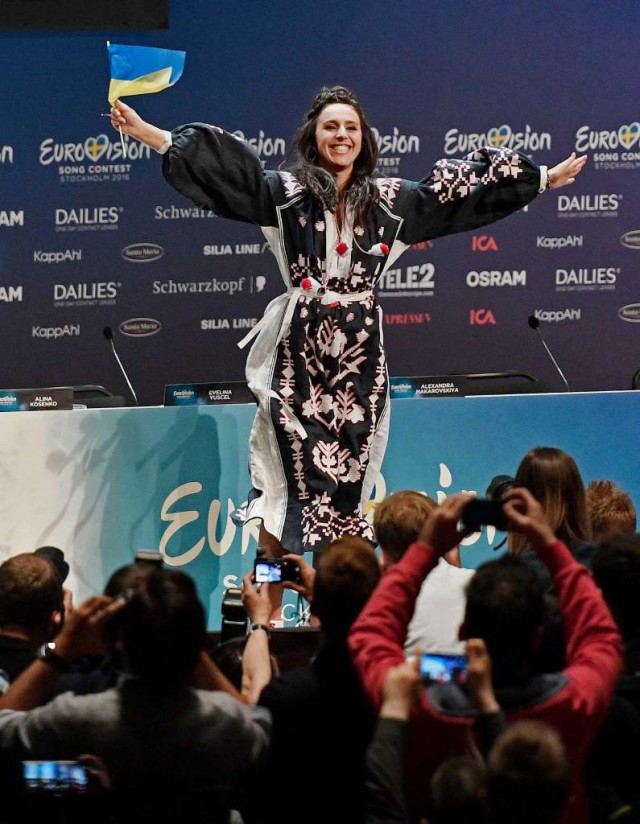 The victory of Jamala, Ukraine’s Crimean Tatar pop star in this year’s Eurovision Song Contest, held in Stockholm, Sweden has caused some rather predicable diplomatic tensions between Russia and Ukraine.

Jamala’s song ‘1944’, whose lyrics dealt with the deportation of the Crimean Tatars under the orders of Josef Stalin garnered her a total score of 534 points. The title of the song refers to the year that Stalin ordered the deportation of the whole Tatar people from their native land of Crimea. They were resettled in other parts of the Soviet Union. Jamala, it should be noted, was born in Kyrgyzstan and is thus a descendent of the deported.

The song has angered many in Russia, which illegally annexed the Crimean peninsular from Ukraine in 2014. Jamala was the first ever Crimean Tatar to perform at Eurovision, and her song garnered her plaudits, just as it also created a storm of controversy amid Russian allegations of politicalization of the contest. Overtly political or nationalistic songs are against the rules of the contest.

Jamala’s victory at the Eurovision contest in Stockholm, it is needless to say, a major victory for Ukraine, and a certain ideal of contemporary Ukrainian tolerance and multi-cultural co-existence.

The victorious country is allowed to host the next year’s contest and Ukraine will now have to decide in which of it’s cities that contest will take place.

Jamala’s Crimean background will most likely assure that the civil society activist idea of holding the contest there in spite of the Russian occupation will be at least floated on the international level.

This would most assuredly happen if she also made public her request to hold the contest in her ancestral lands. Doing so would be a case of relatively easy and cost free needling of the Russian authorities by Kyiv. There would be obvious diplomatic tension between Russia and Ukraine if Kyiv announced it’s intention to hold the contest in occupied Crimea. While such an act would doubtless bring further attention to the suffering of the Crimean Tatar community under the Russian occupation, the chances of any Greek or Polish pop stars singing in Sevastopol or Yalta next year are almost zero under current circumstances. The Eurovision contest leadership is notoriously loath to get involved in national and nationalist politics, and it is even more difficult to imagine that the Russian Federation would allow it to take place in what Moscow now considers to be sovereign Russian territory.

So while the idea of having the contest take place in Crimea is appealing to many Ukrainians, most  people understand very well that the likelihood of this actually happening is vanishingly slim.

All these considerations add up to make Odessa a very attractive alternative location for the contest. Ukrainian social media filled up with triumphant buzz and debate on which city to hold the contest in, with many people backing Odessa.

Over twitter, the French pop star Lara Fabian congratulated Jamala and Ukraine with victory, and inquired whether next year’s iteration of the contest would be held in Odessa.  However, she was very far from being the only person to have the idea. The social networks became abuzz with similar proposals.

Well known political analyst Andreas Umland wrote that: ‘The #ESC2017 event should be held not in Kyiv, but somewhere else. In a more realistic vein  than Crimea, one may consider Odessa as the site for next year’s Eurovision contest. The Russian-speaking Black Sea port city is a beautiful party and tourist town. It could benefit a lot from such an event.’

Odessa mayor Gennady Trukhanov also proposed that the city host the Eurovision contest over his Facebook page. He wrote that he was ready to host the event in the city and willing to accept all guests.

Wether Odessa’s infrastructure capacities are adequate to host an event of this size remains an open question. Though calls to have the event in Odessa are likely to multiply in the coming days. Jamala herself is known to love the city and the Black Sea.

In the wake of her victory Ukrainian minister of Culture Yevhen Nyschuk has also taken to Facebook to call for Jamala to be awarded the status of ‘People’s artist of Ukraine’.

On The Life And Death Of Yevgeny Yevtushenko