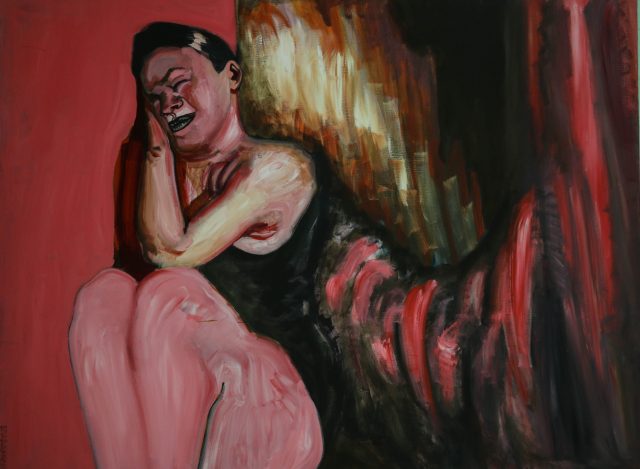 2018 promises to be a very big year of radical change for the Odessa Fine Art Museum. After four of months of both political and bureaucratic struggle about which a historical novel should really be written, the renowned Odessan painter and public intellectual Alexander Roytburd was named the director of the museum. His appointment is widely seen as a victory for reformist forces within the city and in the country more widely. The exhibit of “Anatomy”, the first show under Roytburd’s curatorial guidance, of the paintings of Vlada Ralko will last till May 23rd. A joint project together with Mystetsky Arsenal is planned, and more lections, exhibitions and even concerts will be be announced very soon.

The Odessa Fine Art Museum is open daily except Tuesday, located on 5A Sophievskaya st.

The Museum for Change team, a civil society organization dedicated to reforming the Musuem culture in the city and which is now headed by Roytburd, has immediately began the process of the OFAM’s revitalization and refurbishment. New programming, with an eye on developments in contemporary art have been scheduled, with the first such exhibit being the solo show “Anatomy” by contemporary painter Vlada Ralko. The show opened on April 28th and continues on for 10 more days until the end of May. The Odessa Review took part of a press-tour that was held before the opening, which included a detailed excursion with the artist herself  acting as a guide. 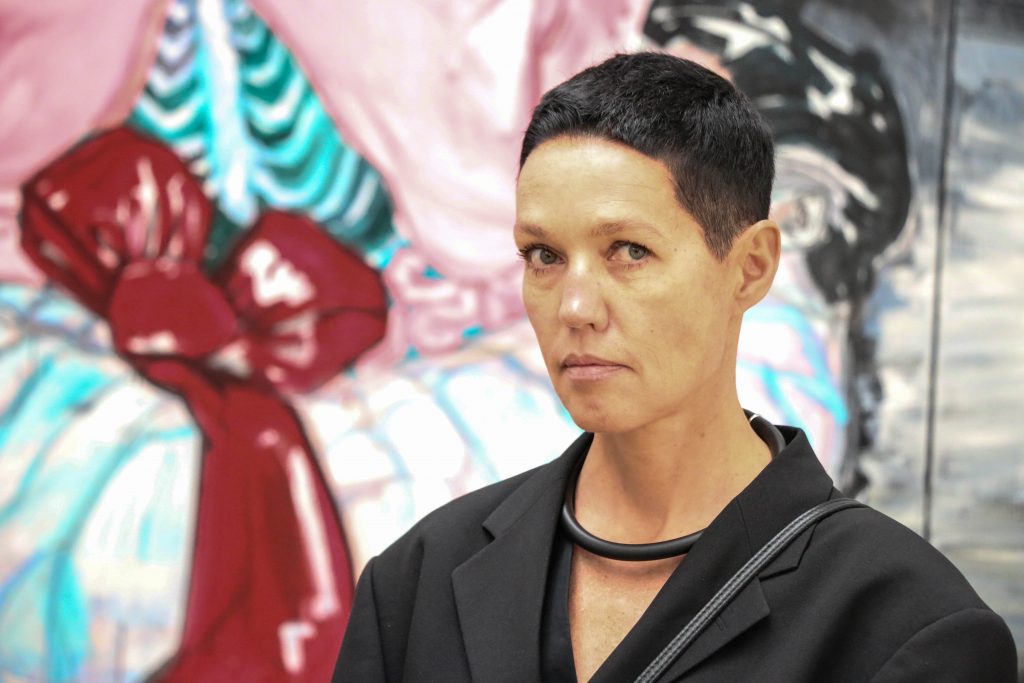 Vlada Ralko was born in Kyiv in 1969 and studied painting at the National Academy of Visual Arts and Architecture (in the workshop of the great painter Viktor Shatalin). Since her graduation from the academy back in 1994, Ralko has developed her own unique style of painting, which is characterized by its sensuality, expressiveness (it is reminiscent of the Viennese Actionists and early 20th century expressionism), corporeality and extensive use of a glittering pink hue of paint. Today she is recognized as one of the most prominent contemporary artists working in Ukraine, having had numerous exhibitions and receiving numerous awards at home and abroad.

One can feel the artist’s intense energy immediately entering the exhibition hall. The paintings are monumental, most of them consisting of two or three large canvases more than two meters wide. The color scheme consists of bright and clear turquoise, bloody red, thick black – and, of course, the artist’s “dollish”, almost innocent brand of hot pink. The paint creates an almost palpable tension with its contrasting anxious and sometimes aggressive figures and an almost literary “plot” for the story the paintings tell.

The characters in the paintings are mostly women with fluorescent blue eyes and jet black lips.  Or they will have smiles like those on a mask. Other distinctive themes in the world that she created included twins, some of these being reminiscent of conjoined Siamese twins, and figures which are faceless. There are also contorted and limbless bodies with their bowels exposed to the viewer. These are figures which are frightening and and which also call out for our sympathy at the same time. Corporeality is the key word for the entities in Ralko’s paintings: being something dreadfully unnatural, they are also simultaneously so fleshy that you can feel your own muscles twitch when looking at them. It is clear that the paintings have many layers of meaning, and that the best way to discover some of these is to listen to an explanation from the artist herself.

Works from various different series and periods in her oeuvre are represented in the musuem show. The aim of the project is to reconstruct the current state of the world and her own particular view of events through intense views of the past. The body retains its status as the main symbol and dimension of the soul and interacts with the viewer through the depiction of bone and tissue in the painting. For Ralko, the body is not separated into “upper” and “lower”, or the “good” or the “bad”: it is holistic and a single entity. A body that is separated from its core essence is for her no longer a living thing, but rather a corpse. It is also beyond our capacity to understand.

There are also other, more significantly gestural symbols that the painter uncovers for us as if she is translating a mysterious text. For example, twins and forked figures intimate the moment of hesitation and the complexity of choice. There is also the repeated usage of thick black and pink lines in the “Reserve” series to depict the Dnipro river (it becomes a mythical demarcation line between Eastern and Western Ukraine). The river keeps flowing as if nothing much is happening while dramatic events go on all around it, and this delusional tranquility frightens us. Smaller works from the “Behind the Screen” series reflect our detachment while we watch daily news on Television: she thinks about our capacity to believe things that are actually happening. Another subject that Ralko  studies carefully is the subject of human passivity. Limbless bodies with heads covered can not fulfill their functions so they start softening and become more of an abstract silhouette. Like a rag doll used for crime investigation experiments, they can only be hostages for the others’ will and actions.

In her “Art School” series Ralko returns to her experience of studying anatomy and contrasts it with traumatic reflections on both revolution and war.  During the late stages of Soviet Union, art school anatomy classes were training the artists to portray an ideal communist hero: flawless, asexual and superfunctional. Educational materials there – skeleton and muscle models, anatomical tables, were deprived of the mystery of life and death, which each of us hides under our real body’s skin. Now the artist reconsiders them and adds some defensive elements, such as a gun or a portable radio set, in order to bring the reality influence into them and break the vicious circle of unconsciousness. The work is certainly not for everyone and some controversy has already erupted around the exhibition, with more traditional and conservative art lovers finding the paintings’ honesty and fleshiness to be over the top and even disturbing. Yet, Ralko’s art is based on creating her own mythological space in rethinking the turbulent reality of Ukraine. An ideal of “Immanence” represents the complex symbolical language that she uses to describe our visual world. The exhibit is very much worth visiting.