Home Culture Art Technology And Contempory Art
SHARE
Facebook
Twitter
Berlin’s renowned Transmediale festival is an ongoing adventure in art, culture and technology, and is an important stop on the international art festival circuit. It is an annual festival in Berlin whose mission is to draw out new links within contemporary artistic and technological discourses. Transmediale thinks about technology and culture as being something more than merely self-enclosed discourses that emerge from institutionalized fields. Founded in 1988 as a special video and media art program within the Berlinale’s International Forum of New Cinema, aft er some time the festival became independent and developed a focus on multimedia-based art forms (including Internet and software art). Typically, Transmediale is filled with innovative views, discussions and artworks and has emerged an essential event for media art professionals, artists, musicians, activists and students from all around the world. At the same time, the CTM (former club transmediale) festival is based around contemporary electronic, digital and experimental music, and a diverse range of artistic activities which are in the context of sound and club cultures. It started in 1999 and it is still running in parallel with the Transmediale every year. These festivals do not merely reflect on trends and innovations within art fields but also open up the contemporary discourse on emerging technology, information resources, research bodies and disseminators of innovative work, they also make a vital contribution to the further development of critical, innovative music and media cultures. 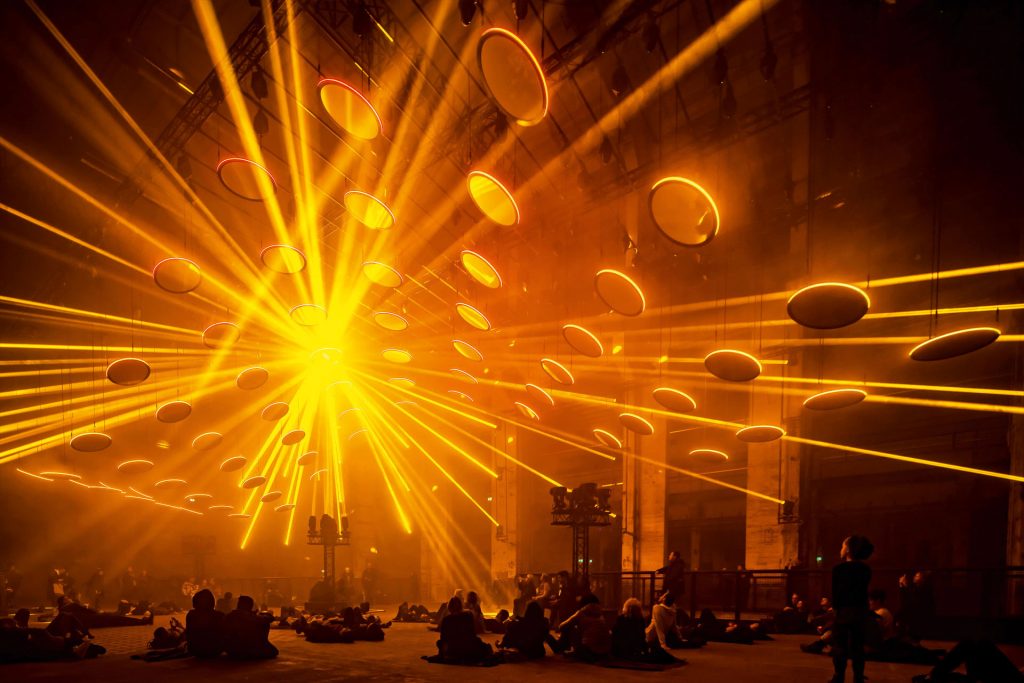 The first time that I had the chance to attend and take part in the Transmediale and CTM festivals was exactly two years ago. Together with the RecPlay audio/visual improvisational ensemble from ArtScience interfaculty, I performed at HKW (Haus der Kulturen der Welt) on the second day of Transmediale. That was my first time in the city and taking part in this digital culture. This year I was not performing but rather exploring art, culture and technology.

The theme of the CTM festival this year is Turmoil, with the implication being that the “world is in turmoil”, and much of the work on display reflected on possible futures and attempted to predict changes in our own being in this world. The art dealt with musical potential and approaches, suggesting that “uneasy times demand uneasy music”, thus questioning the capability of sound to express protest and formulate new solutions to old problems. The program provided a great chance to explore this way of thinking, through events which were spread out all over Berlin. The Kraftwerk Berlin venue presented “SKALAR” a largescale installation by Christopher Bauder and Kangding Ray that investigated the complex impact of light and sound on human perception. The piece is produced out of the generative luminous structure which embodies a synchronous interplay of 65 motorized mirrors, 90 moving lights, and a multichannel sound system. “SKALAR” immersed the audience in a completely different dimension, allowing them to stay in it forever observing a range of elements in complex compositions. Another great focal point is the exhibition “Uncanny Valleys of a Possible Future” which will be up in the Kunstraum Kreuzberg/Bethanien until the 2nd of April. As an example, Lawrence Lek’s “Geomancer” video piece follows the creative awakening of artificial intelligence and the journey of an adolescent satellite AI to Earth to fulfil the dream of becoming the very first AI artist. Rendered in HD with Unreal Engine video game software, this compelling piece explores the implications of post-human consciousness. 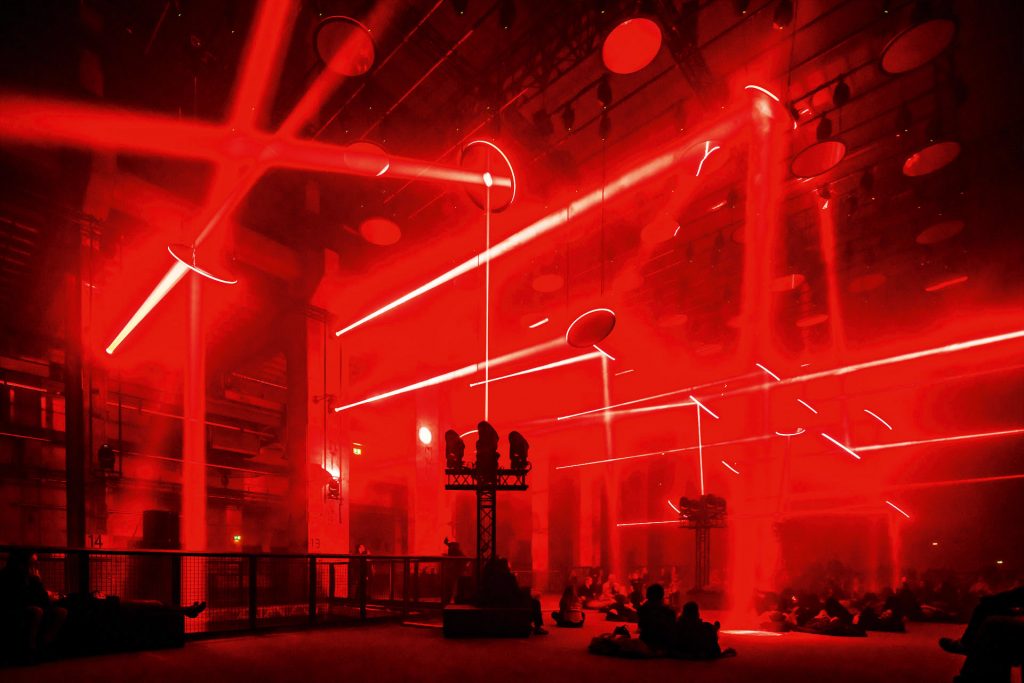 On the other hand, “The Physical Mind” installation by Teun Vonk provides an opportunity to explore the complexity of the human consciousness through the sensations of the body. The installation is Vonk’s attempt to experience the relationship between physical and mental states through the act of applying physical pressure to the body of the participants with two massive inflatable pillows, which balance participants into another greater state of presence.

Typically, Transmediale is filled with innovative views, discussions and artworks and has emerged an essential event for media art professionals, artists, musicians, activists and students.

The “Physical Rhythm Machine_Boem BOem” by Philip Vermeulen, presented in Halle am Berghain during the special night program, deserves special mention. This extraordinary act works by playing on our sense of presence, bordering on fear and excitement. The “Physical Rhythm Machine” (PRM) is an immersive “visceral” acoustic instrument in which two heavy duty shooters fire tennis balls 150 km/h and 14 meters high, smashing them on 2 sound boxes. The tennis balls can be shot within particular intervals and so the machine creates rhythmic patterns. For CTM 2018, the artists Lakuti and Sam Barker created their own compositions for the PRM, which have been performed in addition to Vermeulen ’s own funky rhythms.

Finally there is the program of the Transmediale, with its thematic exploration of the “Territories of Complicity” and “Becoming Resemblance”. The exhibitions were curated with the participation of transdisciplinary artist and educator Heather Dewey-Hagborg as well as American whistleblower and activist Chelsea Manning in the Haus der Kulturen der Welt. A particularly interesting part of the program took place in between discussions during the panel on the theme of the violent imagination of financial capitalism with the participation of Larry Achiampong & David Blandy, Max Haiven, Amel Ouaïssa and Nina Power. This particular panel is focused on speculative constructions of capitalist society. Afterwards, Larry Achiampong and David Blandy continued the conversation with their piece “Unpacking Finding Fanon: Media Minerals”, which referred to the personal experiences of their friendship, geopolitics, racism and post-colonialism during the age of new technology. The Transmediale expands our capacity to understand the world that we live through the interplay of art and technology in ways that allow us to find new ways to bring attention to the lesser understood problems in the digital age.