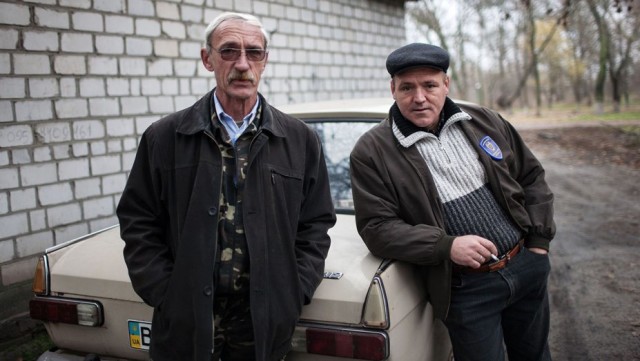 The Ukrainian Oscar Committee, set up by Ukraine’s National Union of Cinematographers with the participation of Ukraine’s Association of Producers and the Ukrainian State Film Agency, has announced the Ukrainian submission for the Best Foreign-Language Film category at the 2017 Academy Awards. It is to be Roman Bondarchuk’s scabrous “Ukrainian Sheriffs.”

Before the Ukrainian Oscar submission was announced, the members of the selection committee released a shortlist of three award-winning contender films. The first of these was Eva Neymnann’s “The Song of Songs.” The feature was presented at the Odessa International Film Festival 2015 and became a winner of both the National and International Competition Programs. The story, based on a Jewish tale by Odessa writer Sholem Aleichem, is a romantic drama about the impossible love between Shimek and Buzie, who happens to be the daughter of Shimek’s dead brother. In “The Song of Songs,” Eva Neymann meets with the genius director Kira Muratova, who inspired Neymann’s screenplay.

The next on the list was “Ukrainian Sheriffs,” a documentary feature directed by Roman Bondarchuk. The picture was presented in Odessa within the framework of the DOCU/ХІТ program, a part of the Docudays UA festival of documentary features about human rights. “Ukrainian Sheriffs” was the winner of the special jury prize in the main competition at the International Documentary Film Festival in Amsterdam (IDFA), where the film’s world premiere took place. The documentary is about two “sheriffs” of a southern Ukrainian village who take it upon themselves to solve the problems of their community because of scarce police presence. Outdated Soviet symbols, values of enslavement which are unacceptable in freedom-loving modern Ukrainian society as well as fears of prison, starvation and war are interlaced with humor, the struggles of love and the miracle of birth. The film leaves an ambiguous impression, but in spite of this, remains the most powerful feature among contenders, conquering the hearts of national and international audiences.

“The Nest of the Turtledove,” directed by Taras Tkachenko and starring Ukrainian actors Rymma Ziubina and Vitaly Linetsky, was the third potential selection for submission to the Academy Awards. The film won the ‘Work in Progress’ Award at the 2014 Odessa International Film Festival. The world premiere of the film took place later at the 2016 OIFF and received the prize for Best Picture in the National Competition Program. The film was shot in both Ukraine and Italy with the support of the Ukrainian State Film Agency. “The Nest of the Turtledove” is about the emigration of a Ukrainian woman to Italy. She chooses to work abroad because of her country’s problems, considering Ukraine to be socially, financially and spiritually draining. The cinematography tries to shine a light on the constant problems of “developing countries.” However, this film also shows that “developed countries” cannot provide one with everything, as the protagonist lives in lonely solitude in advanced Italy. The director of “The Nest of the Turtledove” attempts to question social norms in the intertwined two worlds through the narrative of one family.

It is important to note that in 2015, Ukraine was not a participant in the Academy Awards nominations program as the country’s film selection committee was undergoing a full reorganization process. The Ukrainian National Union of Cinematographers now works in collaboration with the Association of Producers and the Ukrainian State Film Agency. This year, the committee resumed their work governed by new set of regulations and a new panel consisting of sixteen active Ukrainian cinematographers. Thus, films will not only be nominated by individuals well versed in cinematography, but those who have worked and created them as well. As a result of their expertise and experience, these panel members can more astutely nominate films for Academy Awards categories, as they fully understand the styles and underlying messages of films which are successful both in the United States and across the globe. The film “Ukrainian Sheriffs” meets those demands perfectly: the film is unique in that it portrays the intricacies of human nature, rather than merely satisfying the aesthetic needs and underlying patriotic perceptions of the committee. It is also very funny. Furthermore, the committee’s new regulations prohibit panel members from nominating a film before viewing all possible contenders thus allowing for a well-rounded decision.

The complete list of nominees of the 89th annual Academy Awards will be released on January 24th, 2017. The ceremony will take place on February 26th, 2017 at the Dolby Theatre in Los Angeles, California.