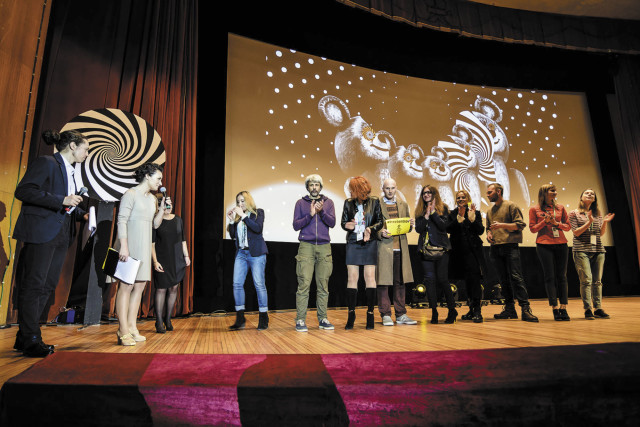 Docudays UA is by far the largest documentary film festival in Ukraine, and it takes place the last week of March in Kyiv. The festival is a part of the Human Rights Film Network (HRFN) that works to promote the screening of human rights related films worldwide. Through membership in the network, festivals cooperate to support human rights films that grapple with social issues in a search for independence and disclosure of government cruelty, while exploring human nature and delving deep into the human spirit. The main purpose of HRFN is to publicize films that resonate across national borders, capturing a world in which the opportunity to thrive, or even merely to survive, is an ever disappearing commodity.

Docudays UA is a cinematographic exhortation. The function of the festival is to shine a light on the issues which are consistently plaguing every sphere of contemporary human life. The festival tries to question the difficult circumstances of ordinary lives by showing different aspects of their search for safety. And while the themes of the features are often familiar, they often have the power to grip film-goers emotionally.

All entries must address a human rights related topic. Docudays UA traditionally consists of competition and non-competition programs. The competition program presents three categories: DOCU/LIFE, DOCU/RIGHT, and DOCU/SHORT. The distinctive characteristic of Docudays UA is the fact that separate juries (including a student jury and the audience’s voters) select the winner in each category. Non-competition programs often include films that were hailed as the best works at international festivals. Beyond exposing audiences to powerful documentary features, the festival also holds a DOCU/CLASS teaching section complete with lectures from guest speakers which include judges, directors, film critics and program coordinators.

This year, XIV Docudays UA begins on March 24th and will continue until the 31st. Documentary features from Holland, India, Germany, Portugal and other countries will be presented as part of the festival. Docudays UA is also quickly becoming a domestic platform for Ukrainian premieres for notable works that have had their world premiere at other European festivals. Among these are films such as “The Leading Role” directed by Serhiy Bukovsky (the world premiere took place at DOK.Leipzig 2016). This year, viewers will have the opportunity to see its Ukrainian premiere at Docudays UA. The feature was shot with the support of the Ukrainian State Film Agency and stars actress Nina Antonova — mother of the director and the muse of Anatoliy Bukovsky, a very talented filmmaker of the Soviet period. “The Leading Role” offers a refreshing take on a personal story touching on themes of sacrifice and freedom. The film’s dialogue is filled with memories of prior triumphs that came about in the relationship between the mother and her son.

In addition to allowing viewers the opportunity to see documentaries of talented directors from all over the world, a primary purpose of Docudays UA is to facilitate dialogues about justice, equality, and humanity as well as the formation of supportive environments for human rights. The festival presents features about struggles for human rights and dignity, against censorship, repression and conservative governing systems that seem to have been created for the express purpose of tossing people off welfare rolls. In a word, Docudays UA provides fresh understanding of human rights struggles, and portrays visions and aspirations to redress violations of these rights.

The best films of Docudays UA are also presented in different regions across Ukraine within the Traveling Film Festival throughout the year. Several top-notch works of Festival Docudays UA are presented to the audience within the DOCU/ХІТ program. One of these documentaries of the XIII program was the powerful work “Almost Holy” (“Crocodile Gennadiy”) which was directed by Steve Hoover. The film premiered at Tribeca Film Festival and is currently being screened in theaters in New York City and Los Angeles. The legendary director Terrence Malick, who is a recipient of the Palme d’Or of the Cannes Film Festival, produced the feature. Steve Hoover shot the real life adaptation without a script. The film explores the life of Ukrainian pastor Gennadiy Mokhnenko, whose mission is to save young street children from tragedy. He helps children to find families, kick drug addiction, and live productive and interesting lives. However, his heart is broken because of the Russian occupation and war in Ukraine, so he struggles to decide in which role, as man or as a pastor, he can be more useful to his country. This work is so powerful that it needs no introduction; rather what it needs is an audience all over the world.

Another notable documentary featured in this year’s DOCU/ХІТ program was Roman Bondarchuk’s “Ukrainian Sheriffs.” The story of a pair of volunteer lawmen in a southern Ukrainian village, who decide to solve all the problems of their community on their own because of a scarcity of police presence, is hilarious. The premiere of the feature took place at the International Documentary Film Festival in Amsterdam (IDFA), and won the special jury’s prize in the main competition. Later, the film was presented at other festivals around the world.

It is important to note that both features were announced by The Ukrainian Oscar Committee as national submissions for the 2017 Academy Awards. While neither film ended up being selected as one of the final nominees in their categories (“Ukrainian Sheriffs” in Best Foreign-Language Film and “Almost Holy” in Best Documentary Film), their merit, both as cinematographic works and testaments to the current human condition in Ukraine, is undeniable.

Ulyana Dovgan is a film critic for The Odessa Review.

A Home For Tolerance And Equality In Odessa