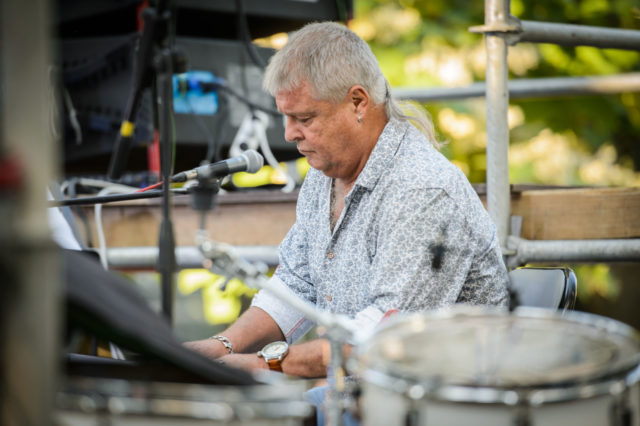 Yuri Kuznetsov, Odessa’s great Jazz man sadly passed away in May of 2016. The Odessa Review is commemorating Kuznetsov through the words of his friend Sergei Ostashko. The two friends got into some amusing trouble two decades ago.

They say that everyone knows each other in Odessa, and when you walk down its streets this seems, indeed, to be true. One of my friends had this to say about the situation: “It’s not that the city is small, it’s that the layer is thin”. For those who don’t recall Soviet terminology, “layer” is the nickname given by Lenin to the intelligentsia.

As part of that “layer”, I had been acquainted with Yura Kuznetsov for a long time, albeit rather nominally at first. Our conversations were usually limited to pleasantries and speaking about the weather. We only began to develop a real friendship close to the ‘Yumorina’ (Odessa annual comedy festival which takes place in April) in 1997. Back then, I was the head of the festival’s press office, and Yura-as everyone called him – was the musical curator. It would be easy to assume reading this that our high positions within the city’s comedy “elite” was what brought us together, but that was not the case. Yura had always been a very jovial person, and I was a fan of telling a good joke myself. Our mutual antics and the way we played off each other brought a lot of mirth to our staff. At one point there, we had the idea to write down our jokes for the sake of posterity, but later we realized the futility of that plan – our jokes were funny ‘here and now,’ but not really ‘there and then’. Our friendship grew even closer after one particular funny incident – although it did not seem that funny to us at the time.

In 1997, the Yumorina festival had as its base of operations a large third-floor apartment in the very center of the city. The windows looked out onto the City Garden, and the entrance was on Gavannaya Sreet.  In order to enter this lair of humor masterminds, you’d have to first go up to the second floor before crossing a hallway-bridge to the neighboring wing of the building and afterwards taking a sharp turn and climbing up a steep stairway to the very top floor. The apartment was usually crowded, but on that day, right on the eve of the festival, everyone had dispersed for the day. It was around lunch time, so we went to the “Spartak” hotel restaurant on Deribasovskaya to partake in their incredibly delicious blintzes.

After lunch, Yura and I headed back to the apartment. At the entrance we were confronted by two shady characters. One was short and scrawny, but obviously the leader. The other was a hulking guy, taller than me and as wide as Yura and I put together. Of course, neither one of their faces showed the slightest trace of intellect – in fact it was rather hard to refer to them as “faces”. Their countenances were rather something between a human face and an animal’s snout. The pair was obviously trying to act like locals, but their Baltic-Moldavian accent gave them away. The smell of Moldavian red wine wafting off of them offered an important clue as well.

After my pack of cigarettes made its way to the shorter thug’s pocket, it started to become clear that we weren’t going to get off that easily.

– Now hand the money over! – the taller one commanded. It was clear that this line was assigned to him specifically due to the intimidating effect of his size.

Things were definitely taking a turn for the worst and I began thinking of escape strategies. Sure, we could take the little guy in a fight, but the huge one might pose a problem. Besides, I knew that Yura had to play the next day and so could not risk injuring his hands. It was then that I came up with a truly brilliant, so to speak, jazz improvisation.

– Then let’s go upstairs – the short one commanded and we ascended up the stairs.

As I let Yura pass me, I inconspicuously passed him the keys and whispered:

– After the turn in the hall, I’ll stall them – you run upstairs and call the police!

– What are you two whispering about? – the tall one asked suspiciously. The veins on his forehead bulged out from the mental effort required to construct such a long and complex sentence.

– Just trying to remember where exactly we put the money – Yura was quick on his feet.

We reached the second floor without incident, crossed the metal bridge into the neighboring wing like prisoners under convoy, and right before the major turn I stopped dead in my tracks, turned towards the gangsters and in a peaceful tone asked them this quintessential Odessa question:

– So, where are you guys from?

– Uh…Moldava, – the big one began to mumble and instantly got a stern shove from the leader.

– What, you can’t tell? We’re from Moldavanka.

– Oh! What street? I’m very familiar with that area – I continued tensely feigning interest, all the while straining to hear Yura struggling with the lock.

– From…uh… – the short one strained every last one of his brain cells.

– From the…what’s his name…Lenin Street – the big one finished his sentence for him.

At this moment I heard the apartment door open and then close behind me, and sighed in relief.

– Where’s that second guy? – the hulk asked, dumbfounded after making the turn and seeing an empty staircase.

– What guy? – I played dumb meticulously.

– The one that was with you.

– Who was with me? – I continued playing dumb.

– The other guy! With the braid!

Yura’s hairstyle at that time (it has not changed much through the times, actually) featured a rather unique five centimeter braid.

– Just then, when we were talking about Moldavanka.

I managed to keep this charade up for an impressively long time, seeing as my survival depended on it. I kept trying to buy more and more time, but it was obvious that the game was coming to an end. Right as the scrawny ringleader became enraged and pulled a switchblade out of his pocket, to my immense relief I heard the thunderous sound of policemen’s’ boots on the metal bridging. Back then, the police responded quickly… Seizing the moment, I kicked the hand holding the knife and shoved the man away from me as hard as I could. He tumbled away past the bend in the hall, landing right at the policemen’s feet. The giant was still standing there, and I think the only thing that spared me his wrath was his abject stupidity. While he strained his faculties, attempting to figure out where his friend went and what just happened, the policemen apprehended him as well.

After the incident, Yura and I decided not to tell anyone so as not to worry our families. We only let the cat out of the bag about two weeks later, when I came over to visit Yura in his apartment on Deribasovskaya with a bottle of cognac in hand, and over that bottle we got to re-living former escapades. After that, Yura got behind his piano and improvised a three-hour concert for me. Well, it probably wasn’t so much for me as it was for his wife Natasha –  an attempt to calm her down after hearing the story of our recent adventure.

Sergei Ostashko is a journalist who lives in Odessa.