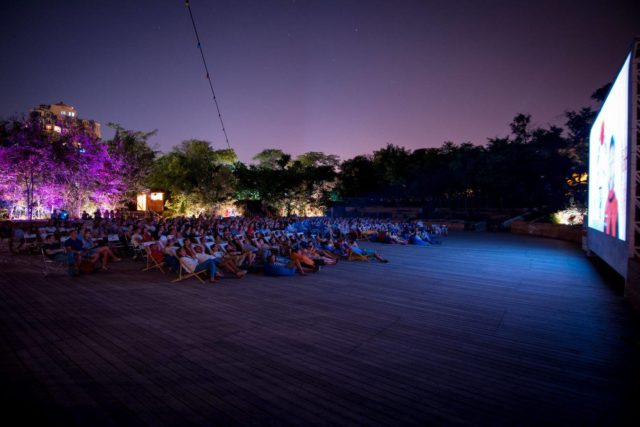 Тhe festival of documentary features about human rights Docudays UA took place on March 25th this year in Kyiv. Four top-notch works of the festival were presented to the audience within the DOCU/ХІТ program: Under the Sun directed by Vitaly Mansky, How to Change the World from writer-director Jerry Rothwell, Ukrainian Sheriff by Roman Bondarchuk and Almost Holy (Crocodile Gennadiy) directed by Steve Hoover.  An unusual aspect of Odessa’s DOCU/ХІТ, which took place at the end of the summer, was the open air screening at the Green Theater from August 20th to the 23rd. Film-goers who were not able to watch the features in the Green Theater had the opportunity to visit Impact Hub Odessa for watching the four-film program from August 25th to the 28th.

The DOCU/XIT program presented the best features from the Docudays UA festival – films that would be interesting to audiences from all over the world.  These documentary works capture the strength of spirit and the power of patriotism, uphold democratic values and illuminate the path to independence, as well as standing in opposition to oppressive political systems.  The filmmakers tried to question social norms in different worlds by showing the economic and spiritual aspects of human lives, and the way communities try to find the keys to security and safety.

Under the Sun directed by Vitaly Mansky was the first feature presented during the program of DOCU/ХІТ. Being the first documentary film about North Korea in recent time, it was one of the most expected works of the festival and drew large crowds to the screenings.  It’s interesting to note that in order to get the permission for shooting, the director agreed to the North Korean government’s conditions: strict compliance with their script and their supervision of every detail of the project. As a result, the film is a small model of the real life in North Korea where everything submits to the government script. Through the extensive use of propaganda, the governmental machine has been fixed firmly and deeply in the conscience of the masses. Several times during the screening it seems that the feature was over (one of these due to the technician, who had forgotten to charge the laptop). But it continues every time, telling the viewers that the endless hell of totalitarian political systems will cease to exist only when individuals understand that there is nothing more important than freedom. Under the Sun hits very close to home for Ukrainian audiences because of the similarity with their past in the Soviet Union. The maniacal belief in state enemies and the worship of leaders, the similar architecture, the surrounding grayness, the symbolic red ties and other details transport viewers 25 years back. At the same time, the documentary gives new information about life in a different world to the international audience. Overall, the film is more valuable as a document of life in North Korea than as a cinematic experience.

The second film of the DOCU/ХІТ program was How to Change the World, a winner of the Sundance Film Festival directed by Jerry Rothwell. The feature is about an idealistic group of activists from Vancouver, Canada who became the founders of the global environmental organization Greenpeace. They first came into the public eye in the 1970s with the movement for stopping Nixon’s atomic test bomb in Amchitka, Alaska. The brave resistance and strong political views of the group members made them into heroes despite the failure of the first mission , and the disagreements and conflicts in their further endeavors. The feature encourages the viewers to look at the world critically and to recognize the damage that humanity brings to the environment. It asks them to stop destroying the planet and to give future generations a chance of living a full and healthy life. These fighters for the world captured their foolhardy actions on film, enabling Rothwell to create a deeply affecting and terrifying work which has become one of the must-see documentaries of 2015.

The third documentary in the screenings was the feature by Roman Bondarchuk Ukrainian Sheriffs. The picture is about two “sheriffs” of a southern Ukrainian village who decide to resolve community problems on their own because of scarce police presence. Outdated Soviet symbols, reminders of enslavement which are unacceptable in the freedom-loving Ukrainian society, fears of prison, starvation and war are interlaced with humor, love struggles and the miracle of birth in this film.  In spite of creating such an ambiguous impression, Ukrainian Sheriffs conquered the hearts of national and international audiences. The premiere of the feature took place at the International Documentary Film Festival in Amsterdam (IDFA), and won the special jury’s prize in the main competition. Subsequently, the film was presented at numerous other festivals around the world.

The last film in the program and the most powerful work among the four favorites was Almost Holy (Crocodile Gennadiy) directed by Steve Hoover. It premiered at the Tribeca Film Festival and is currently playing in theaters in New York and Los Angeles. The feature is produced by legendary director Terrence Malick, a recipient of the Palme d’Or of the Cannes Film Festival. Almost Holy is an antithesis to Mansky’s Under the Sun since Steve Hoover shot real life without any script at all. This is the story of Ukrainian pastor Gennadiy Mokhnenko, who makes it his mission to save young street children from disasters. He helps them find families, kick drug addiction, and live productive and interesting lives. His heart is broken by the events of the Russian occupation and war in Ukraine, so he tries to decide in which condition, as a man or as a pastor, he can be more useful. This powerful work needs no introduction, but needs to be seen by everyone who is not indifferent to the human struggle.