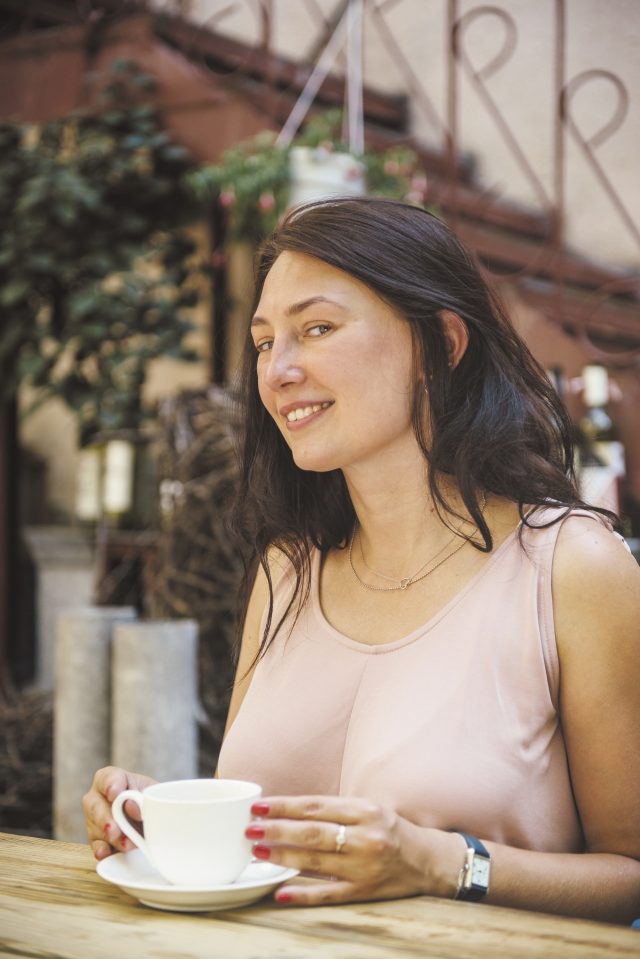 Kateryna Babkina — is a master of literature, in the sense that all of her many occupations, actions and interests, are in one way or another connected with literature. By education Katya is a journalist and she has worked with Ukrainian and foreign publications such as Esquire, Le Monde, Harper’s Bazaar, Art Ukraine, Buro 24/7, The Insider as well as the Focus platform. Yet her core passion and the motivating spirit for everything else is her work as a poet. This includes her volumes “St. Elmo`s fire,” “Mustard,” “Pain Relief and Sleeping Pills” and “Spell On Love.” Her prose includes (“Lilu after you,” “Sonya,” “Pumpkin Year,” “The Hood and the Whale “and” “Happy Naked People”) and have translated into 12 languages, including Hebrew. She is also a playwright and a screenwriter, and recently shot her debut short film “The Yellow Box” based on her own script. She is by any measure one of the most interesting writers working in contemporary Ukrainian literature.

On a sultry August day in Odessa, Babkina spoke to the The Odessa Review about the work of the writer as well as her thoughts on Ukrainian literature and travel.

On Writing and Journalism

Journalism was always an intermediate stage for me, and I knew that. I decided to become a writer in adolescence, and I realized that I could do it and that I am good at it, and I wanted to try to make it my profession. I understood that it is not a specialty that one can make a living with all at once. Simply because in our market conditions, it is impossible to publish a first book, whatever it might be, and immediately earn a living with it. There are different young poets who travel everywhere by hitchhiking, they sleep in their sleeping bags and live off whatever their listeners might bring for them to the readings, but that is an extreme option. Therefore, I realized that I would need some kind of profession and I jumped on the journalism bandwagon, because I thought, if you can write well, in that case you can be a journalist! In fact, a journalist must have a mastery of language, the ability to write, and the ability to tell a story, — these are the necessary skills, but even those are no guarantee anything. A Journalist needs to have some other features as well, and fortunately I also turned out to have a few of them. So my 10 years in journalism were painless and even somewhat successful, but it was certainly an intermediate stage. I still continue to write columns for certain publications, which are interesting to me, the purpose of which is important to me, but this is not my primary activity.

I once conducted a lecture in which I explained what the writer’s activity really is. Being a writer, an author of books is a team team, it is a full time job and it is very sociable one that allows you to be strongly connected with other people, because a book on the market as a product is the result of the work of many people. Moreover, it is the result of the work of other institutions. One third of my lecture, nevertheless, was talking about how to write a book. About how you should go about finding your own topic, your niche, work with text, etc., but basically it is all about what this process should look like and what the writer should do in fact. What are the steps towards making it a professional activity, rather than a hobby. That is, what the typical mistakes are, how the market functions, how much it costs, what fees are paid, what an eleven percent royalty means, why the cost of a book in a store is what it is and those sorts of nuances. And the lecture very much helps people. All sorts of people, not just those who really want to write art texts, but also those people such as cooks, restaurateurs, psychologists, consultants etc., who would like to write non-fiction about their experiences.

In order to be successful, a writer needs to write well, and to understand that the writer’s job is in addition to writing, being able to interact with people. Therefore, the book is a common product, the book market is a field for team work. To be able to feel time, society and the world is important, to feel what is interesting now, and I do not want to use the the word “relevant,” because what the author writes should be ahead of the curve in some ways. The author needs to have a feel for what to talk about with people in the moment. Therefore, a good author inspires, and this means doing work that lead to interesting action processes. That process is the result of a dialogue between the reader and the author. That process is part of every book.

A portrait of my reader? Well, I suppose it is people who know how to appreciate the elegance of a word. People who are good at imagination, because this is always the source of the success of the reading process in general. Also people who are open to different perceptions of the world and want to open their own perception even more.

The foreign reader perceive me well and there is a kind of discovery every time. When I went to Israel to present the book, I seriously asked myself how I could speak about it in English, because here I am, some kind of public figure, and I already have a name around which a certain audience is grouped. Therefore, they are waiting for these books, they demand them, and so on. Another thing is that this name is built on good texts, but it is also a brand. And in this new country it is at the level of zero, and from that level, the book of poetry is produced and it was necessary to come to the book fair in Tel Aviv, and then to Jerusalem, to speak with the audience, not with people who came there from Ukrainian or Russian-speaking spaces, but with the Israelis, who live there and read books in Hebrew. And they do not care at all that the book was originally written in Ukrainian, by Katya Babkina.

I honestly thought that the audience would consist of five cripples [as the saying goes] and we would cry along with them about the fate of translated poetry, but it wasn’t that way at all. The book was received very well and there were numerous readings. This was a very important experience, and it is important to understand that your texts live on without you. People make decisions only on the basis of the text and its quality, well, and the cover, and perhaps in response to the half understood call of their soul. I have nothing to do with that. And this I consider to be my greatest achievement: the books outside of Ukraine, outside the Ukrainian market where I am present, can promote themselves.

Ukrainian literature has changed a lot over the past decade. This is manifested in the number and quality of texts as well as in the general expansion of subjects. It is clear that, so far, we can not approach the French or the Germans at the international level in terms of translation. But how many people translate from the Ukrainian? Maybe just a few, and if we can find two translators for each of the top languages, that can be considered to be a great success. The French, for example have a tradition of literature, and in our own country the tradition of literature consisted mainly of the extermination of our literature. And now it is being formed. And it is being formed, frankly, very dynamically, much faster than I expected when I first started to think about it.

I really like that the Ukrainian background allows authors to be international, in other words, to produce texts that are understandable outside of the context of Ukrainian reality. It is very important. These texts will be understandable and equally important to people from different countries, from different realities, because what the authors say, their ideas, there can be any theme, but the idea should be universal, should be built on what is understandable and should grab people by the heart all the same.

And Ukrainian modern texts, they are like that. Because, for example, Russian contemporary literature is plentiful and rich, but I would say that maybe it is less likely to enter the international market, since the major contemporary Russian novels, contemporary prose, is of a very specifically Russian nature and context, and outside that context of post-Soviet life and Russian reality, it turns out not to be so close to the concerns of over people. This it is not uninteresting to them. That is, we were lucky that we somehow transformed this background differently. This is the beginning of great prospects for our literature and our integration into world literature. But there is a lack of institutional support, as well as support for the promotion of the Ukrainian book abroad, we do not have it at all. What we do have is done by the British Council, the Goethe Institute, the French Institute, the Italian Cultural Center. I do think however that we will overcome this problem and in 10 years, it will not be an issue. I would like it to be so. Today there is already a great demand and interest in us as a brand of cultural products, and that is very good and important.

Now, I would go anywhere. There are places that I’ve already visited and would not go to again, just because I saw them and learned a bit about the place, and I think that’s enough for now with them. But the world is big and absolutely every direction is attractive to me.

Travel makes you bigger, you begin to understand that the world is much larger and more diverse than what is around you. It expands you, expands your life, increases your ability to accept new ideas, foreign views and a variety of possible stories. I like to travel, but mostly it’s professional travel. Recently, I was on a road trip with [Ukrainian film actress] Katya Molchanova, travelling between my readings in Poland, Berlin and Paris, and on the way we drove here and there and went to Normandy. It was a business trip, as prosaic as that sounds. I am inspired by many countries, and in very different ways. I love Italy and France, small cities, and not super touristy destinations. I really love New York and I am crazy about South Asia, if you vacation there and do not really immerse yourself in domestic life, you will learn that the reality is very different from our own. Scandinavia is very good, well-equipped for living. Beautiful Denmark is an example of how, even with the worst weather in the world and the highest taxes, you can still build a comfortable and simple country for living.

I lived in Berlin and I like it there and I like Paris. Absolutely all cities and destinations inspire me, but in different ways.

Regina Maryanovska-Davidzon is the Managing Editor of The Odessa Review.