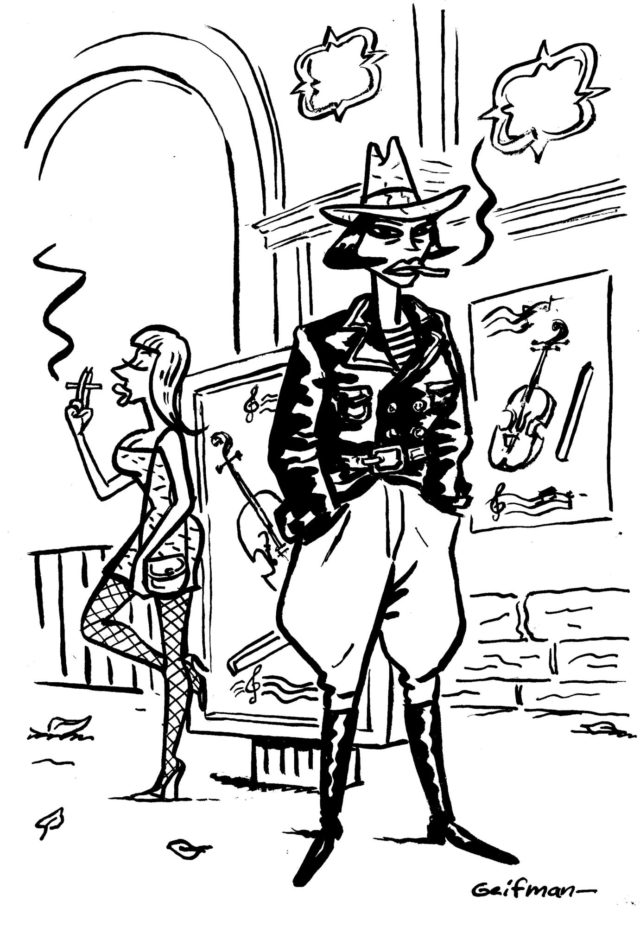 During the first year that the ‘City Semibasement’ Club was first opened in Odessa, it was so well-attended that it was absolutely impossible to get in – and there wasn’t much reason to, anyway. It is anyway much better to breathe the air of freedom on the Primorsky Boulevard or on the Bolshoy Fontan, preferably alone or as part of a twosome. I had a hard time explaining this to both the Odessa Intelligentsia and the Odessa Literary Community. They both proudly wore club pins with the slogan ‘From the underground into the Semibasement!’ and spent all their evenings there.

During my childhood, the space which would later become the club had housed a lady street-sweeper with her tuberculosis-stricken husband and feeble-minded son. They later received a room in Cheremushki [ed. a suburb of Odessa] from the government, and after that, the basement became a place for several neighbors to stockpile their coal. Later, the house had gas piping installed, and the coal ovens (and with them, the basement) lost their purpose. It was after this that the erstwhile street-sweeper’s shack became a refuge for the city’s most progressive elements. Even the Odessa Beaumonde  walking hand in hand with the Odessa Contraband (she was an impressive young lady, though her smile was somewhat spoiled by a golden tooth) was known to drop by there. But the Odessa Agency was nowhere to be seen. I was surprised when I finally found out where she had disappeared to.

One of my greatest flaws is an excessive love of classical music. Walking past the philharmonic, I can’t pass without stopping to study the concert schedule. Now, it should be noted that the block next to the philharmonic had traditionally been the gathering point of the city’s “night butterflies” – that is women of a certain profession. Once, while I was deliberating whether or not to attend the “Polkas and Marches” concert, someone tapped my shoulder from behind, asking whether I needed a date.

When I turned around, I saw the Odessa Agency. She was– a little older, but in good shape and dressed in a skirt suit.

You look great! – I exclaimed – So, you’ve become a madam?

– ‘Call it what you want‘ she responded ‘but actually, I am the head manager and CEO of the sexual service workers’ union’.

– But is the room in the hotel “Odessa” still reserved in your name?

– No, no. They took it away. The Austrian Airlines head office is now there.

The Odessa Review’s OIFF Diary: Day 4 — King of the Belgians, The War...