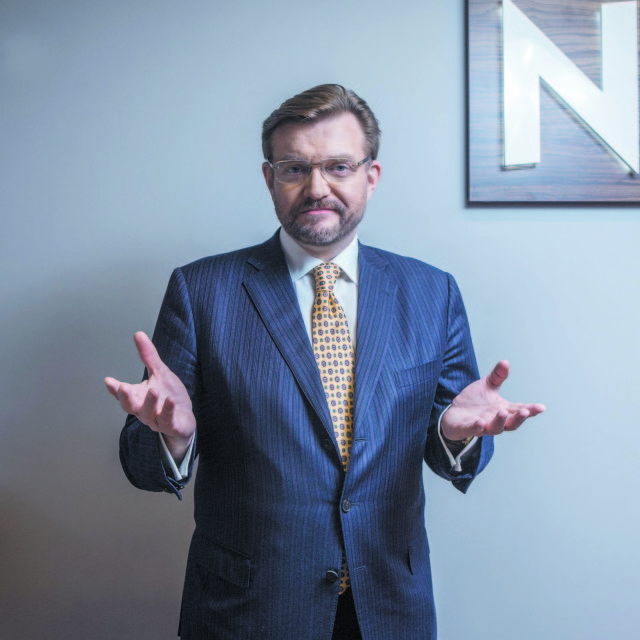 The celebrated Russian television journalist Yevgeny Kiselyov became famous as a young journalist for his refusal to report the official position of the Politburo as the USSR was losing control of the Baltic states. He has been a central figure in Soviet, Russian and now Ukrainian media since he first worked as interpreter in Iran and Afghanistan during the Soviet invasion of Afghanistan. Hosting the Russian NTV channel’s weekly news show “Itogi” in the 1990’s, he became Russia’s most famous television journalist, harshly criticizing corruption and the feckless rule of President Boris Yeltsin. In 2001, he left NTV following the government backed hostile takeover of the station, and served briefly as general manager of TV-6 before the government refused to renew its broadcasting license in January 2002. When it became obvious that he could no longer pursue his vocation in Russia, Kiselyov moved to Kyiv, where he has since become one of the Ukraine’s most renowned journalists. Kiselyov spoke with The Odessa Review in the lobby of the Hyatt hotel in Kyiv.

Emigration is a very difficult step, psychologically and emotionally, especially for people who are limited by cultural and linguistic barriers. I have been here in Kyiv for almost 10 years now. I first arrived in 2008. At that time, to the question of why I left Russia and moved to Kyiv, I would reply that “I am not a refugee or an immigrant, I am a work migrant.” Because back then, which was almost 10 years ago now, we Russian people of democratic and liberal convictions were held captive by naive hopes that the situation in Russia would change. In part those hopes were fueled by Prime Minister Dmitry Medvedev, who had been positioned by Putin as his successor. At that point, no one suspected that after four years the notorious “castling” move would happen and Putin would come back to power. Few people could imagine what Russia was to expect in the future. Especially considering Medvedev’s discussions of freedom being better than non-freedom, and also his liberal rhetoric regarding economic reforms, his radical speeches about a fundamental modernization of the country, about rejecting the model of resource economics that is oriented mostly towards exporting natural resources. Many of us truly believed that Medvedev would stay on for a second term. He had also quite the liberal entourage: aides and consultants who have now become enemies of the new regime.

It is true that I first came to Kyiv because I had no opportunity to work in my profession in Russia at the end of Putin’s second presidential term. I received a great offer to work here. My former senior partner Vladimir Gusinsky, who is the founder and first owner of the NTV channel, invited me into his new project and I decided to accept. His TV company was taken from him and he tried to “step into the same river twice” and start a new television project in Ukraine, the result of which was TVi and I came to work here as Editor in Chief. Unfortunately, that project didn’t work out.  As they say, the plane didn’t fly. But at that same time I got a new offer from the former owner of TV channel “Inter,” Valeriy Khoroshkovsky, to host a big weekly political program which we called simply, “Big-Time Politics.” It aired for a number of years.

The most popular genre on political television at the time was a live political discussion show where politicians, officials, parliamentarians could speak about whatever issues were on their mind for hours without limitation. Savik Shuster and I worked in this genre,  and also Andrey Kulikov until recently. There were also other less well known discussion programs on live television. Eventually the genre started to outlive itself. This was not caused by President Victor Yanukovich coming to power. The cabinet of Yulia Tymoshenko tried to interfere with media a great deal, to implement their own agenda, to create their own heroes and experts. You know, I have a more philosophical attitude towards that kind of thing, as opposed to some of my younger Ukrainian colleagues. In my profession, I have “eaten a bushel of salt,” as they say, and I realize that in any country, even the most democratic, those in power and independent media are in mortal opposition to each other. So many times I had to hear my foreign colleagues complaining that we have a dictatorship of governmental organizations and political parties. They have a dictatorship of advertisers.

First I worked at one TV show, then I moved to another, then to a third one – and nothing really changed. It’s a merciless and senseless word battle between people, who could almost never generate any content that could impress the audience or could reinvigorate my interest in the work. Unfortunately, most Ukrainian politicians do not really care to talk seriously about real issues — or values. When you ask them: what are you campaigning for — or against — their answer would be like my favorite phrase from a song by the band “Leningrad”: “We are for everything good, against all that’s crap.”

I think all of my colleagues went through a similar experience. Savik Shuster, in my opinion, continues to host his show on his last legs. Andrey Kulikov left his show “Freedom of Speech” on ICTV at almost the same time as I quit my show on “Inter,” and I feel that in their present state these programs are slowly and painfully dying. Instead, I began hosting a daily show at NewsOne — a kind of long, unhurried interview with an interesting person who could be from the world of politics, science, culture, economics, literature, journalism, anything at all.

There is an interesting thing that happens if you take any Ukrainian political talk-show as an example. In the studio all politicians try to speak Ukrainian, but the second a commercial break is announced, they all switch back to Russian. I am in no way judging this, these are merely my observations. I believe that in the next ten years, the bilingualism of Kyiv will recede in favor of Ukrainian. Most young people in schools and universities hear their lectures in Ukrainian, so in the future it will be difficult for them to communicate professionally in Russian. It will remain more of a household and street language. It’s another matter that Ukraine must make an effort to preserve this bilingualism, which presents a cultural and historic value. All of the old Kyivan intelligentsia was bilingual and valued that highly, feeling strongly that it belonged to both cultures. Sometimes, it would even take pride in its Polish roots. One of my artist acquaintances would tell a funny story: back in the 70’s he and his friends liked to go to Moscow, when they were young. In those years there was a large demand for monumental painting. They earned good money and would go to spend it in the capital. So they are sitting in one of the Moscow’s trendiest cafes, all dressed up in fancy clothes, and are intentionally speaking with each other in Ukrainian, to create a puzzle for the waiter: where do they come from? The waiter keeps walking around them, finally asking, what their nationality is — Polish, Czech, Yugoslavian? They say — we are Ukrainian. The waiter replies: well, look at that, such great guys and turn out to be “khokhols!” (Ed. This is derogative slang for Ukrainians.)

There exist a lot of stereotypes and cliches about the wealthy Russians who lived in Kyiv before the revolution and the first few years post-revolution. It is said that they looked down at Ukrainians and their language with condescension. For example, Bulgakov, being a man of Russian culture, a monarchist and an imperialist in his convictions, depicted in his great novel, “White Guard,” caricature types of Ukrainian nationalists of that time on one hand, but at the same time — caricature types of the Russian nobility. In that work, Bulgakov is doing what a real writer must always do — he is just drawing true historic portraits of the people who lived in the time that he is depicting. All judgments are put into the words and thoughts of his characters, but in direct speech. There are a few stunning pages where the characters don’t notice the fiery Ukrainian slogans. In fact, if you dig deep in Ukrainian history, there is plenty of evidence that in the 19th century the most ardent and loyal servants of the empire were in reality Ukrainophiles and “half-imperialists.” Take the famous general Mikhail Dragomirov, who was for many years the governor of Kyiv. He was a faithful servant of the Tzar and a father to the soldiers under his command. He was also a great Ukrainophile, and he gathered great leaders of the Ukrainian enlightenment in his home, loved to wear vyshivankas and to sing Ukrainian songs.