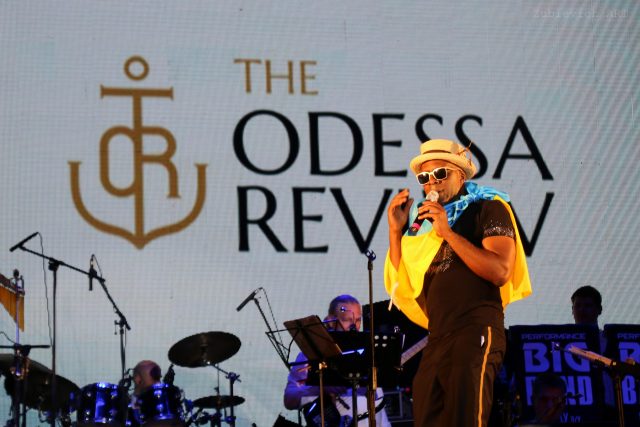 On August 27 in Chernomorsk, the 15th Koktebel Jazz Festival, which has long been positioned not so much as jazz festival, but as a multi-genre festival, ended. A wide variety of music was played the on different stages: big bands, and chapels, DJs, street brass bands, ethnic music, folktronica, trip-hop, IDM, balkan music, reggae, rockabilly and much more. Of course, jazz, also was played. The organizers’ goal is clear: with this genre variety they want to attract as large an audience as possible, and therefore catered to every taste. While this does broaden the appeal, the festival is losing its integrity.

The headliners of the festival this year were longtime guests and friends of Jazz-Koktebel (Karl Frierson, Red Snapper), and musicians who performed for the first time on the stage of the oldest Ukrainian jazz festival (Jay -Jay Johanson, Asian Dub Foundation, Shantel). Karl Frierson performed with the Nikolaev Performance Big Band under the direction of Vladimir Alekseyev. This is not their first joint concert, in April 2012 they gave a joint show in Nikolaev. This time the performance received a mixed reception: some things were quite interesting and notable, arrangements for the big band were tastefully done, a number of songs sounded powerful. However, viewers also got the sense that the musicians had not rehearsed together enough, that they were not used to playing together and and were not used to each other. Frierson has played in Ukraine for a long time on an ongoing basis, sometimes giving more than 10 concerts a year. Therefore, he has a roster for performances in our country, which includes Ukrainian musicians. But these, as a rule are small-scale tour groups, consisting of musicians, perfectly comfortable with the material and with each other. It was different with the big band. You could hear all their shortcomings, and there were many of them.

The sound on the first day also left much to be desired. These issues arose with the big band that accompanied  Frierson, and with ethno-folktronic Ukrainian Katya Chilly Group. In the ethno-folktronic genre, lack of quality sound is a big problem. The genre requires nuanced sounds, produced on exotic instruments, and Katya Chilly’s vocals, especially when  in the upper register, require an audio quality that simply did not materialize. As a result, Katya’s performance was dull. Her music is best suited to indoor venues, not open-air festivals.

Nowadays the Ukrainian spectator is perhaps a bit spoiled by the quantity high-quality, European-level concerts and music festivals. AlfaJazz, and ZaxidFest set an incredibly high  bar for the quality of Ukrainian niche festivals. Atlas Weekend has become the main Ukrainian multi-genre event. In addition, music lovers can now afford to attend any European festival, it could be the Sziget Festival or the cult Glastonbury. Ukrainians have something to compare with. And if 15 years ago the  “Jazz Koktebel” was a breath of fresh air for Ukraine, now it is in the “one of many” category. though, of course, it does have a tradition and history that many festivals work on for years.

The second day of “Jazz-Koktebel” was an excellent example of  a quality, European festival. First, there was a powerful and versatile line-up, where the headliners were Red Snapper and the Asian Dub Foundation, and between them the crowd was blown away by the Ukrainian electro project “Vagonovozhatye” which has over the 3 years of its existence, earned cult status on the capital club scene. Secondly, the sound suddenly became more than perfect. From every point on the beach, the quality was crystal clear. And finally, the dynamics of the performances was well thought out: Red Snapper played the great fat jazz-groove, seasoned with light trip-hop, then the impeccable live work of the “Vagonovozhatye” led by Anton Slepakov shook the listeners through their ground pads, and, finally, the Asian Dub Foundation, the main group of the festival, quickly put the points in their places, giving out an incredible show of the highest class with a powerful drive and social rap for the concrete work of musicians. Undoubtedly, this day would have been the crown jewel of any A-class music festival.

As for the rest of the days there are a lot of questions  primarily concerning the line-up and the dynamics of musical development that took place on stage. If you came to listen to Jay-Jay Johanson, you previously had to listen less interesting Ukrainian compositions. However, Ukrainians were represented in a variety of genres, which clearly shows the development of the Ukrainian music scene. This is definitely the strength of the Jazz Koktebel – they are look for solid compositions from our country, and bring them to the next level of quality. And if, for example, bands such as “Vagonovozhatye” or the pioneers of Ukrainian reggae “Vyo” need no introduction to Ukrainian music lovers, the HeartBeats Brass Band, professing the New Orleans school of street brass bands with a good segue into funk and hip-hop, and about the absolutely incomparable The Hypnotunez, working in the genre of classic rockabilly, were heard by many for the first time.

So, in the end, that  “Jazz-Koktebel” is stylistically diverse is not a bad thing . It is a festival, after all — and this is one of the goals. The viewer who came to listen to Red Snapper also learned about the existence of The Hypnotunez. They began as  a niche jazz festival, and made a conscious decision to adopt the multi-genre niche. Perhaps some things are not quite  working for them, but the main thing is that they are still there. They survived  the difficult move from their established Crimea venue, and they continue to develop. As the director of “Jazz-Koktebel” Lilia Mlinarich says: “We need more festivals – good and different ones”. Koktebel Jazz Festival has definitely found its niche on the country’s festival map, and every year they offer projects that are interesting to even the most demanding music lovers.

On The Life And Death Of Yevgeny Yevtushenko