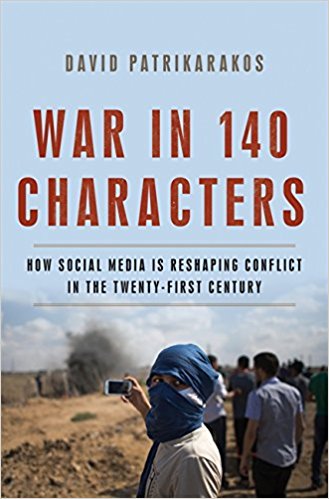 The man was as insistent as he was drunk. He leaned in; his reeking breath was repellent.
“Putin he Strong, he strong!” he slurred. “Kyiv — it’s fascist junta, fascist junta!”

It was summer 2014. I was in eastern Ukraine reporting on the war between Russian-backed separatists and the Ukrainian government, and the man’s message could have come directly — albeit with more finesse — from a Moscow official. It was unsurprising. The Kremlin’s narrative regarding its actions in Ukraine — contained in, Tweets, memes and doctored photos — flooded Facebook, Twitter and all the major social media platforms of our age. It was then that I decided to write what would become my second book “War in 140 Characters: How Social Media is Reshaping Conflict In The Twenty-First Century”.

Two years later, I found myself walking through a cluster of tiny streets in central Gaza city to meet “Ahmad”, a senior figure in Hamas, the Islamist group that rules the Gaza strip and has, since its inception, been at perennial war with Israel. Ahmad had a neatly trimmed beard and an austere look. The 2014 war between Israel and Hamas, he told me, had been a clear victory for the organization. Despite the devastation Tel Aviv had wrought on Gaza, “the Jews” failed to defeat Hamas, which showed what an effective resistance force it was against Israel — an evil occupying power. Most satisfying of all, Ahmad concluded, the world had seen all this.

He was right. It was all there on social media: the Palestinian narrative played out, this time mainly in the near-endless photos of the dead emerging from Gaza as the Israelis pummelled it from the air and on the ground. The Russia-Ukraine and Israel-Palestine conflicts have shown how warfare has irretrievably altered in the wake of the digital revolution and the emergence of social media.

Twentieth-century thinking on conventional conflict is largely based on the ideas promulgated by the Prussian military theorist Carl von Clausewitz, who conceived of war as something like a straight military fight between sovereign states. The battleground was as clear as a boxing ring, and the enemy was obvious. Military victory was easy to determine, and once it was achieved, the victor imposed a political settlement on the loser. The defeat of Germany in World War I and the resulting Treaty of Versailles offers a perfect (albeit egregious) example of this process.

But over the last few years, as I have traversed continents to cover and explore different conflicts I came to understand that what I was seeing, from Ukraine to Gaza to even Iraq, was the gradual erosion of this type of war in favor of looser, more open-ended conflicts.

Russian president Vladimir Putin has to this day no interest in defeating Ukraine militarily (which he could easily do) or of forcing it to accept Russia’s annexation of the occupied parts of eastern Ukraine. Clausewitz observed that war is the continuation of politics through other means, but in the Ukraine conflict — and increasingly in the Israeli-Palestinian one — it is the practice of politics itself. Rather than militarily defeating Ukraine, Moscow seemed most concerned with getting eastern Ukrainians to subscribe to a political narrative: the one that drunken man had so inarticulately tried to explain to me: namely, that the Kyiv government — a “fascist junta” — was out to persecute Russian-speaking Ukrainians. This was because its ultimate objective was not the defeat of Ukraine but its destabilization, for which it needed to divide the country’s population by getting a section of it to embrace a particular narrative. In essence, its military goal was political rather than military.

In Gaza, the violence, while horrific, has, since 2014, always had an almost perfunctory, almost balletic, quality to it. Hamas endlessly fires rockets at Israel that both it and the Israeli government know will almost all be shot down by Israel Defense Force’s (IDF) Iron Dome missile defense system Much like Moscow in Ukraine, Israel has no intention of defeating Hamas militarily (which it can easily do) and forcing it to finally accept Israel’s existence. Instead, the social media arm of the IDF Spokesperson’s Unit floods Twitter with information about Hamas’s use of human shields, and its rockets attacks on Israeli civilians: its narrative is clear: “We are a democratic state under terrorist attack”. In response, Hamas officials and ordinary Palestinians tweet and post photos of dead children killed in Israeli attacks. Its counter-narrative is equally clear: “We are an oppressed people being slaughtered by an occupier”. As with the Ukraine conflict, for both sides, the goal is not a military victory but a narrative one.

Once this is understood, the great change in conflict of our age is witnessing becomes clear: modern war is quickly becoming the physical manifestation of a clash of narratives — and the change could not be more profound.

For centuries of warfare, information operations supported military operations on the battlefield; as Ukraine and Gaza show it is becoming increasingly clear that military operations now support information operations in the narrative sphere. All wars are, to a degree, a clash of narratives, but in Ukraine and Gaza — two of the great contemporary conflicts — this strand is so prominent that they have become almost a spectacle played out for an audience — the watching world, which, thanks to social media, can follow the action in real time and in greater detail than ever before. Ukraine and Gaza have inverted war’s traditional paradigm. They are information wars that are played out on the battlefield, in which the former is more important than the latter. It is gladiatorial combat and war as political theater: a truly postmodern conflict.

And it is the future. Modern war is quickly becoming the physical manifestation of a clash of narratives — and the change could not be more profound

David Patrikarakos is a contributing editor at the daily Beast, contributing writer
at politico and author of “War in 140 Characters: How Social Media is Reshaping
Conflict In The Twenty-First Century”. This Oped is based on selections from his newly published book.