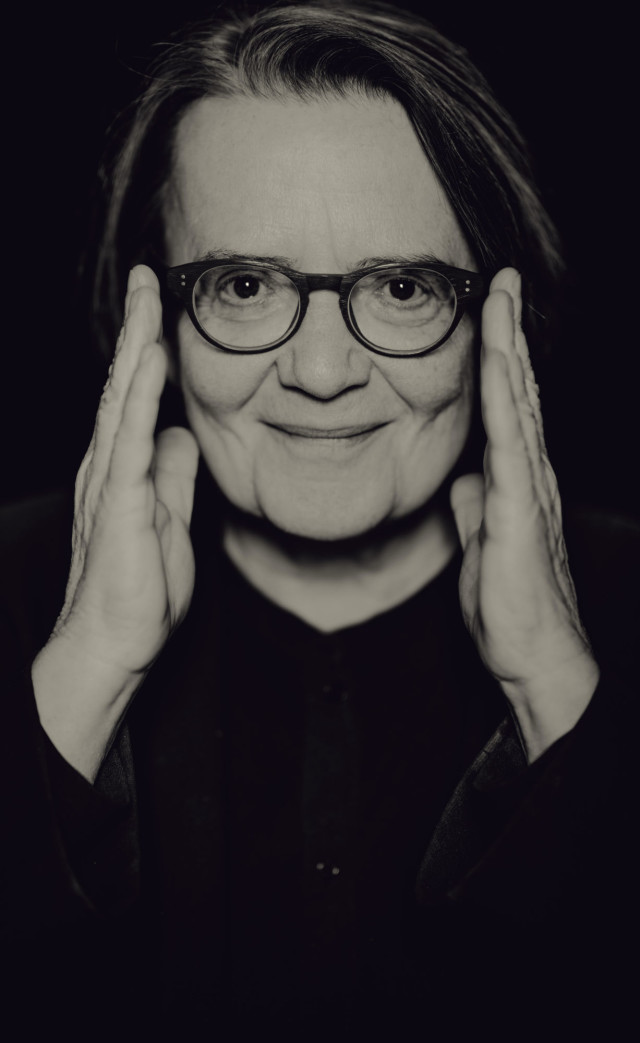 The celebrated Polish filmmaker Agnieszka Holland received her Lifetime Achievement Award at the conclusion of the Odessa International Film Festival on July 22. In her sixty eight years she has accomplished quite a great deal indeed. One of greatest and most accomplished of contemporary European film makers, not to speak of her own native Poland, has been garlanded with prizes including the FIPRESCI prize at the Cannes Film Festival in 1980, and Alfred Bauer Award, a Silver Bear and three nominations for Academy Awards (including one for Best Foreign Language Film).

Holland remains an impassioned supported of Ukrainian filmmaker and political prisoner Oleg Sentsov, who was recently sentenced to twenty years in a Russian penal colony on charges based on fabricated accusations. Holland has directed episodes of the television show “House of Cards” and her new film “Spoor” was screened as part of the OIFF. Holland is preparing to begin filming her next film, ‘Gareth Jones,’ in Ukraine. (Full disclosure: The Odessa Review’s Managing Editor Regina Maryanovska- Davidzon has been involved in the pre-production work of the film). The film focuses on the story of the Welsh journalist Gareth Jones who was the first person to publicly expose the artificially created Holodomor famine ion 1932-33 in the West. Jones reporting on the famine is widely thought to have served as in inspiration for George Orwell satire of Soviet life in “Animal Farm.”  Holland met with the editor of The Odessa Review in the library of a hotel in Odessa to discuss her views on film, the Holodomor and the dire state of Polish politics.

“The project is called “Gareth Jones“ and it has a very specific point of view on the Holodomor, because it is the story of a British journalist, of a young guy, named Gareth Jones, who in his late thirties travelled to the Soviet Union expecting to interview Stalin. He was a foreign adviser to the prime  minister of England but after being fired he was looking around for some activity which he thought would be useful to turn the public opinion to the danger of the authoritarian systems which were growing around him. He was the first journalist to interview Hitler and he was astonished at how little attention he had from political world. He spoke Russian, he was highly educated, very unusual in his approach towards journalism, and he considered journalism in being part of a duty to tell the truth to the public, but also as part of political action.

When Jones arrived in Moscow he met with a group of very eminent foreign journalists, including Walter Duranty. And he realized with the information that he had between the wars, that something was going on in Ukraine. And in a quite smart way and an adventurous way he succeeded in escaping the official guide that he had and to went to Ukraine, where he witnessed the Holodomor. He had his suspicious, because he was economically unable to add up the expenses of the Soviet Union in that economical situation, and so he understood where all that gold was coming from. He understood the purely cynical and idealogical reason for which Stalin practically murdered millions of people by starving them to death. And he decided to tell this truth. It was a difficult decision, because he was blackmailed by both the Soviet and British authorities, as they didn’t want to compromise the relationship with Stalin. And the world was not ready to receive that kind of the truth. He was fighting for it and he paid the price. He was mysteriously killed a few years later, probably by KGB spies.

This is his story and this is the story of the Holodomor, but it is also the story of the guilt of the world, which is not willing to hear the truth and receive the truth about a genocide. So what he sees in Ukraine is the part of the movie, but of course this is the key to entire story. And i think that his perspective, the perspective of the stranger, a little naive, a very sensitive and very bright stranger, can make this reality understandable and relevant to the viewers of today. Gareth perspective, which is, in some ways a very naive perspective, will help wake up a feeling of for the relevance of the story in our day and age. That is what we try to do, to find the point of view which can tell this kind of the story in a way without alienating the people of today, but in which will tell them and let them feel what was happening, and that it is relevant to our today experience, including the corruption and more, the corruption of the journalism and not only the media, and not only merely the post truth media, but also the political class of today. So I hope, it will work. This script is very well written, it is not like a docudrama, it is more like  an artistic vision of what is going on.

We are scouting shooting locations now. We are at the beginning of the process of deciding where and what we’ll shoot. The producer also wanted to shoot in Odessa, because our Polish producer, the leading producer of the project, she is a great fan of Odessa, but we need snow so I don’t think it is the best location.

I think that the main facts about the communists, especially after the fall of communism, wasn’t told in many ways to the contemporary audience. It was not described in any deeper sense, which is what make it so easy it easy for Communism to return. And I think, that the weakness in democracy and the post communist countries, along with the stupidity of Western politics, regarding what are the consequences of communism, is caused in many ways by the fact that the general population doesn’t really know what it was.I think that the lesson of the Nazis, and of Hitler, was quite long and led to the creation of European union, it is evaporating now, unfortunately. And we now are in dangerous time, when some kind of right wing totalitarianism may return. You may see that liberal democracy is something, which is now safe, but it is not at all and not totally. Poland, seems to be a country which successfully came out of communism, but today we have a relapse into the authoritarian danger.»