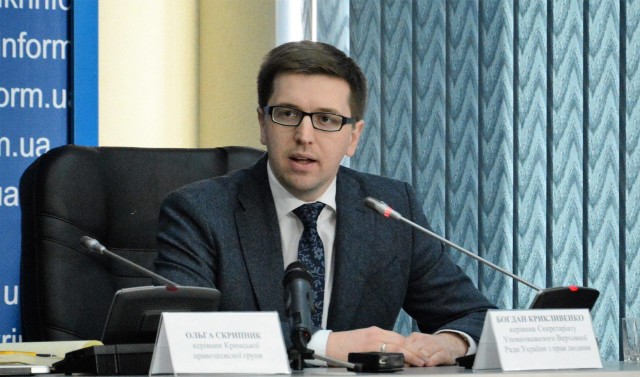 On January 27, 2014 Bohdan Kryklyvenko heard a woman yelling for help outside of his office. Kryklyvenko rushed outside, forgetting his winter coat in the process, to where riot police in balaclavas were encircling two Maidan protestors. The Maidan protests had been escalating and as head of office of the Ukrainian Parliament’s Commission for Human Rights, Kryklyvenko had spent months visiting hospitals to make sure that injured protestors were being properly cared for. He had also grown used to confronting riot police commanders directly to demand explanations for their actions.

Kryklyvenko rushed over and placed himself as a shield between the protestors in their signature construction helmets and the riot police, demanding to know why the protestors were being arrested. “This is the part that could have gotten me in trouble,” he explains while screening a YouTube video of the events in the same office. In the video he had identified who he thought was the commander and placed a hand on him to try and calm him down, this was technically a violation that could have provoked a nasty and even violent response from the anonymous commander. But most of the riot police left, calculating that making the arrest would be more trouble than it was worth. Eventually with Kryklyvenko still shielding them, the protestors were allowed to leave too.

“We brought them over here and gave them tea and a place to rest, and they left” says Kryklyvenko. “I don’t even know their names.”

Since 2012, Kryklyvenko, 32, has been working at the office of the Ukrainian Parliamentary Commissioner for Human Rights. Under the guidance of Commissioner Valeriya Lutkovska, the office functions as the official ombudsman for human rights in Ukraine. It does not have the power to punish officials, but it can monitor and inform officials that they are violating individuals’ rights under Ukrainian and international law. The office receives 50,000-60,000 complaints from Ukrainians a year. Kryklyvenko explains that the big difference between them and NGO human rights organizations such as Human Rights Watch or Amnesty International, is that they focus on individual cases and remedies and less on identifying general trends.

Kryklyvenko’s career didn’t start off in human rights. While studying for his law degree at the Kyiv National University of Internal Affairs, Kryklyvenko began working at the Ukrainian Ministry of Justice when he was just 18. Tasked with vetting applications for positions at the ministry, he started utilizing the information that he gleaned to determine which department within the Ministry had the most interesting work. He quickly realized that this would be with the division that was responsible for the European Court of Human Rights in Strasbourg. He landed a job in the department as soon as he had finished his degree.

Once there, Kryklyvenko would become responsible for implementing international judgements against Ukraine, which meant restoring violated rights and providing compensation to injured parties. Because all of the damages were to be paid out of the central budget, one of the trickiest parts of the job would be in trying to estimate the number of cases that Ukraine would lose and what the damages might be so as to allocate the needed amount for the following year’s budget. Nonetheless, Kryklyvenko found the work of providing people with remedies and compensation after long drawn out legal battles and struggles to be invigorating. “You could feel the relief of people after they had spent years in trying to find justice in Ukraine; the sense of relief when they finally found it in Strasbourg.”

While he worked in the department he dealt with such major cases as that of Yuriy Ivanov vs. Ukraine, in which the European Court of Human Rights called on Ukraine to fix the mechanisms of implementation for court decisions. As in many other post-Soviet countries, even if a claimant would win a case, the court ordered remedy would often never be realized, thus making sure that achieving justice would be an abstract and empty concept.

But it was Kryklyvenko’s intricate knowledge of Ukraine’s budget law that would win him his next job. Lutkovska recruited him to be part of her team, and along with him would create the new division to bring Ukraine into compliance with international law. Along the way they would also establish new divisions for implementing the UN Convention Against Torture and for combating discrimination.

The Maidan protests brought new challenges to the office, which is located near parliament and often had protests camping out meters from its doors. After the activist Mykhailo Havryliuk was stripped and forced to stand naked in the freezing cold, Kryklyvenko went to the riot police’s office and made the commander watch the video on his iPad. This act didn’t stop the torture, but he could at least force the commander to watch — and be cognizant of the actions that his men were taking part in.

Since the Maidan protests, known within Ukraine as the “Revolution of Dignity,”  Kryklyvenko says the government has become more responsive to human rights issues, but admits that there are still many challenges to be met head on. The Ukrainian currency has lost more than 70% of its value against the dollar since the protests began and prices have soared while salaries and social payment have failed to catch up. Around 85% of the applications the commission receives have to do with the violation of socio-economic rights promised under the Ukrainian constitution. That is a problem for IDPs in Ukraine, but not only them, as people struggle to live off of pensions and state salaries worth a fraction of their previous valuation.

Kryklyvenko says that Ukraine’s active civil society is also improving the situation for human rights through monitoring and activism. Previously, he says, civil rights groups dedicated to human rights had little influence, but have now learned how to apply pressure to achieve change, allowing his office to work with them to maximize their impact.

Nonetheless the office faces serious challenges. Defending the rights of Ukrainian citizens in Russian-occupied Crimea and Russian-backed separatist controlled areas of Donbas is popular at home, but other human rights issues are not. After hackers released the contact information of journalists who had worked on the separatist side of the control line and labeled them “terrorist collaborators” the office aggressively criticized the move, which was supported by the Interior Minister Arsen Avakov. As a result it was flooded with threats from the same group that carried out the hack. “You always have to be focused on the obligation. Sometimes society will support us and other times it won’t,” he explained.

The main aim of Kryklyvenko’s work is to make Ukraine’s state structures function in practice and not just in theory. In areas like education and healthcare, Ukrainians are supposed to have extensive rights, but in reality underfunding and corruption makes many of these “rights” dependent on bribes and connections. Kryklyvenko and his colleagues are tasked with not accepting the system as it is, but with trying to pressure it into becoming what it was intended to be. Kryklyvenko sees making reality live up to the promise of law as instrumental for restoring faith in justice. “There is a low level of trust in Ukraine and an absence of justice in Ukraine. If you don’t have justice you have nothing,” Kryklyvenko says.