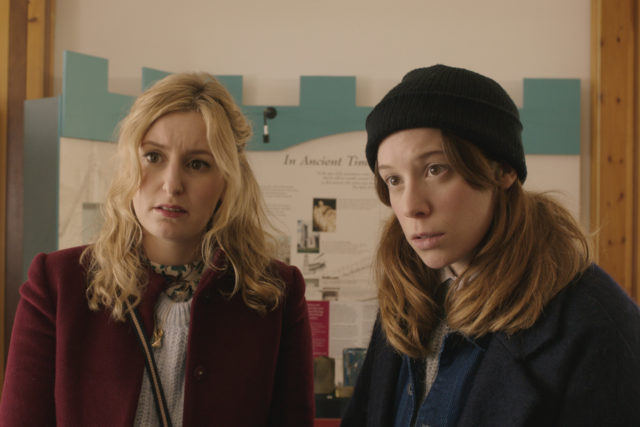 It is often said that the only thing you can’t fix is death. The British comedic-drama “Burn Burn Burn”, directed by Chanya Button, presents the audience with a paradox about this idea: death can fix the lives of those left behind.

However, this idea can only be true under incredibly specific circumstances. Such an environment is set with two close friends, Seph (Laura Carmichael of Downton Abbey fame) and Alex (Chloe Pirrie) who are not happy with their lives. Seph is a mediocre stage actress and Alex is burdened with many secrets that fuel her anxiety. Both of them are in questionable relationships and aren’t very good at communicating with others. With all this being said, their troublesome miscommunication and snippy jokes are incredibly funny and make the movie the genius comedy that it is.

Their story begins when their friend Dan (Jack Farthing) quietly passes away from pancreatic cancer; other than family, nobody knew because he also has trouble expressing his concerns to people. Instead, he put together a video-diary instructing them on where to scatter his ashes across the UK. They embark on an astounding road trip with his remains in a Tupperware container tucked away inside a velvet glove compartment. There are many humorous stops and characters along the way, including a man that can only be described as a babbling transcendentalist hipster who throws Burning Man parties in barns. There’s also the animated Airbnb host and stage actor who emergency recruits Alex to be a stand-in for Jesus nailed to the cross.

The situations and quips get funnier as the journey goes on, but the emotions get more intense. Dan’s third video-message is particularly severe as he harshly criticizes the girls’ flaws. After the anger subsided and realizations appeared because of digitized Dan’s words, Seph and Alex begin to frankly open up to each other and make some decisions about what steps to take in order to improve their lives. Without the death of Dan, without his video messages and his call to this journey, the girls would have been unfortunately stuck in their depressed cycles. Instead, they looked into the eyes of a dying man on a laptop screen and decided to hear out his regrets, his story and to act upon their own lives because of him. Thus the paradox of a death with good externalities can exist, but only with the involvement of inspiring people.

The Odessa audience responded very warmly to this film. They were rotating between laughing so much that the dialogue couldn’t be heard to quiet tears as Dan spoke from the past. There was a big standing ovation at the end proving that this is one of the most touching and entertaining films in this year’s OIFF international competition. Personally, this is, so far, my favorite and I wish it immense luck.

Also an extra note, it has Joe Dempsie in the role of James, Seph’s boyfriend. That’s (the lovely) Gendry from Game of Thrones, enjoy his performance!