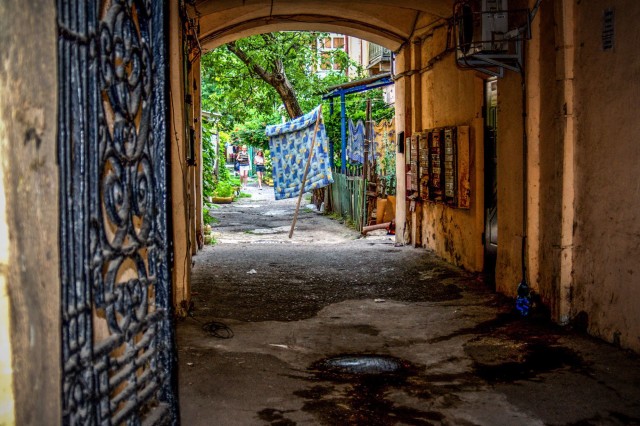 The Ukrainian and Russian words “dvorik” and “dvor” (or dvoriki and dvori in plural) are frequently translated into English as either “courtyard” or “patio,” though these translations do the words little justice. The terms describe the Italianate style shared open spaces which can be seen through any number of archways in Odessa and have a strong association with the development of the fabled multinational Odessan culture. Dvoriki constitute a shared space of communal living, and are much beloved by both Odessites and generations of visitors to the city.

In regard to Odessan buildings, I believe no one would disagree that one of primary architectural trademarks of the city are the original interiors of her dvoriki. They have been praised by writers and poets, depicted by artists, photographed for countless exhibitions and featured in nearly every guided excursion through the city. They are a true gift, which the city first received 150 years ago and which in large part shaped its spirit and international reputation. There is even a stereotype of the Odessan dvor: that it is like one big communal apartment, whose inhabitants are like one huge family, the members of which know everything about each other, and are constantly arguing and reconciling in a very loud and public manner. Afterward, they will all sit together for supper at a long patio table. The children will play together, the men will play dominoes or argue politics and the women hang out the laundry and cook.

Today, such classic Odessan dvoriki are harder and harder to find. More precisely, their original inhabitants are becoming rarer. There are several reasons for this: many of the residents of the dvori moved to apartments in the new residential areas of Odessa in the 60’s and 70’s; other Odessites, especially those with Jewish roots, emigrated from the country at the beginning of the 1990’s. Today, Odessan dvori are settled by people who have come to the city to work, and rent inexpensive housing there. They have yet to absorb the spirit of the city. But the buildings themselves, the entourage of old Odessan dvori, have remained, to the delight of tourists. Without a doubt, they are part of the cultural heritage, but does anyone maintain them today? The city has completed some visible restorative work on the facades of historical buildings, but meanwhile the cream of Odessa patrimony, its courtyards, have been for the most part neglected by city authorities, leaving them vulnerable to the ravages of time. 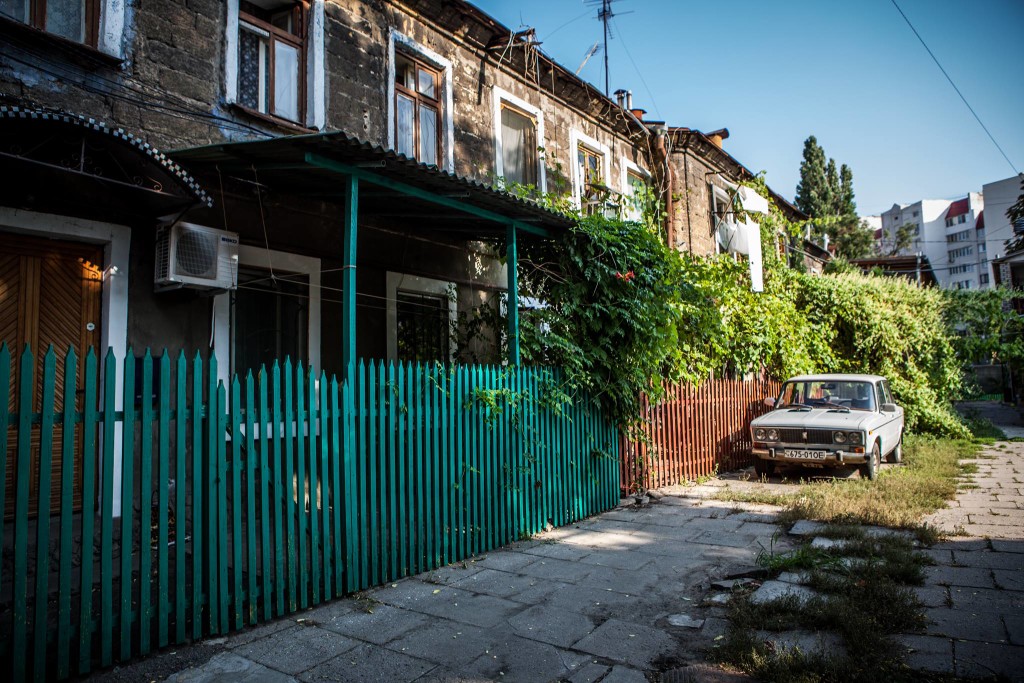 Sometimes, one gets the impression that we have forgotten about them purposefully. Beyond the neglect, however, is arguably even more disturbing tendency in the city: the cynical destruction of historical architectural monuments. One can mention just a few of the recent high-profile cases surrounding the historical and architectural heritage of Odessa: the construction near the famous One-Wall house in Vorontsovski Lane, the collapse of the Masonic house on Knyazheska Street (which was sold under the condition of guaranteed reconstruction), the demolition of the mansion of Constantine Thiel and the last of the pre-Revolution homes on Lyustdorfska Drive. Additionally, the Odessa city council adopted a new zoning plan in October of last year, actually opening the door to massive construction in the historic center of the city. All of this is indeed very alarming. What kind of tourist would come to the city with their camera to photograph grey “boxes” of glass and concrete? Yet, this is what we may be bound for. The dvoriki of Odessa risk repeating the fate of the Roman Coliseum which was destroyed by barbarians, and later on forgotten by the local authorities.

Many Odessan dvori, especially those located in Moldavanka, have deteriorated, both materially and in spirit. Many of them are marked by unauthorized construction, surrounded by ugly porches and plastic balconies. Many have a rather pathetic look, and clearly do not represent the city’s historical heritage. This is because for decades, the dvoriki were maintained only by those who absolutely had to — their inhabitants. They did what they were able to do in accordance with their modest financial situation. Today, however, the city requires a comprehensive program for the preservation of this unique heritage. We also require a social initiative, and the first laudable effort is the “Odessan Dvorik” community project of Anatoly Kavun. But without municipal support, popular local initiatives are difficult to implement.

It seems that so far there is only one good example — the restoration of the dvor and house of the legendary singer Leonid Utesov (11 Utesov Street). Now, the location features the original apartment and a museum dedicated to one of the most famous Odessites. It is a pleasure to watch the tourists lining up to enter. But what about the dvoriki of other famous writers such as Ilya Ilf, Yuri Olesha, Korney Chukovski, Mikhail Zhvanetski?

So hurry to see the Odessan dvoriki, these forgotten cultural treasures, while there is still something to see. They are beautiful at any time of year. The atmosphere of the Odessan dvorik reflects the character of our city to this day — they are always cozy, relaxed and eclectic. Even with hundreds of dvoriki, each is inimitable, and each leads its own, independent life. 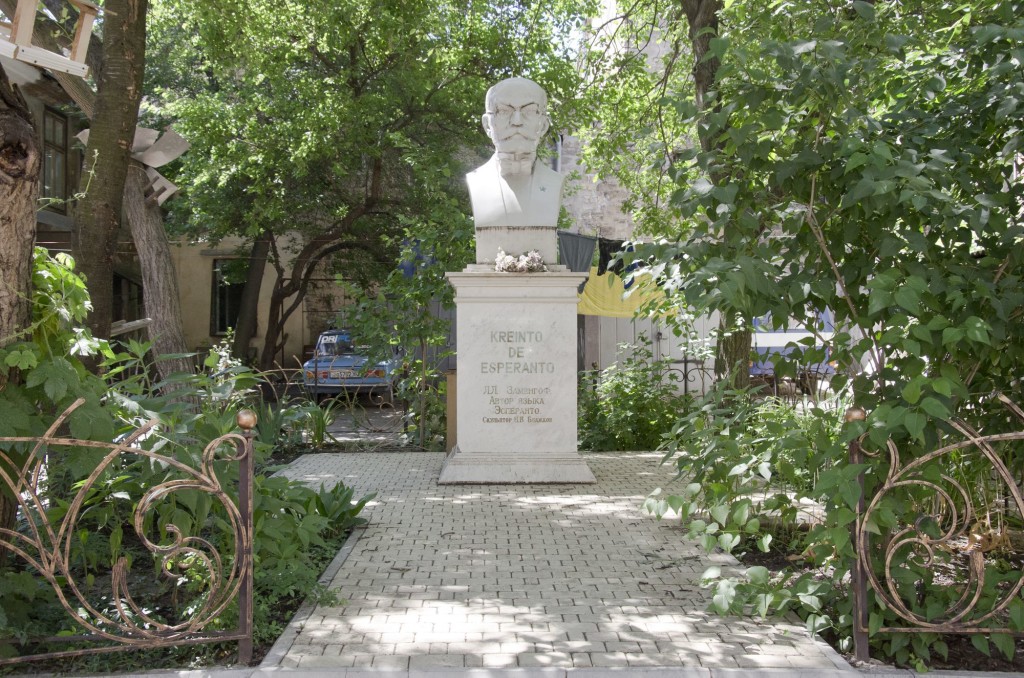 The majority of Odessan dvoriki appeared in the second half of the 19th century and in the beginning of the 20th century. Тhe rapid economic development of the city and its population growth led to a significant construction boom. Local architects chose to construct low rise houses from local stone, based around internal dvoriki that were more typical of Southern and Eastern European cities. Housing stock at the time was still insufficient — homes were overcrowded with very different, and often incompatible, people occupying a very small space. This led to congestion, bustle and noise. Dvoriki were usually inhabited by people of modest means as well as servants, while wealthier citizens entered their apartments through the main entrance from the street. Initially, most houses in Odessa didn’t have running water and sewage, so the center of the dvor was typically dominated by a water pump with a limited supply of drinking water and a well to collect rainwater for non-drinking purposes. There was also a public toilet. You can still see the remains of all these structures in many dvori to this day. The inscription “No Toilet” began to appear after the introduction of plumbing in Odessan apartments, as the public toilets began to be removed. Other essential characteristics of an Odessan dvor are massive black tiles, which were carried by ships coming from Italy as ballast, as well as iron stairs, tiny personal gardens, clotheslines — and of course cats!

Odessa is perhaps the only city in the world where dvori are often home to monuments. Usually, monuments are placed in prominent places, but Odessa prefers to hide some of its grandest monuments from foreign eyes. The most well known monument located in a dvor is dedicated to a man who had never visited Odessa — Ludwig-Lazar Zamengof, the inventor of the Esperanto language. Zamengof grew up in the Polish city of Bialystok, where the simmering inter-ethnic tensions frustrated the young Ludwig. In his opinion, the main reason for hate and prejudice lay in the mutual misunderstandings that were caused by a lack of a common lingua franca. So, the young man arrived at the idea of a universal international language. In the 1950’s, the Odessan sculptor Nikolai Blazhkov received a commission from Poland to create a bust of Zamengof. For unknown reasons, the customer who ordered the bust never arrived to collect the order, and so the sculpture was installed on the roof of the well in the dvor in which Blazhkov lived. In response to questions from local authorities regarding who the bust depicted, Blazhkov, for a long time, would answer that it was his father. Today, the dvor is visited by followers of “Doctor Esperanto” from all around the world. There are other dvoriki with hidden monuments: at 46 Pastera Street there is a monument to the artist Kiriak Kostandi. There is also a monument to Thumbеlina to be found at 1 Vorontsovskiy Lane. More precisely, the sculpture of “Thumbelina,” created by one of the residents of the building, is a monument to his deceased wife, who was a sculptor.

Mala Arnautska Street is one of the most well known and picturesque in Odessa. It is named in honor of the Arnautovs — Greek Albanians who had lived there. Until recently, in the dvor of house No. 14, there lived a daydreamer by the name of Captain Hugo Iron. This gentleman, a former naval surgeon, decided about 30 years ago to construct in his dvor a gazebo to enjoy along with his friends. While digging the foundations, he stumbled upon a well, which was built to collect and store water. An idea came to the adventurous soul of the retired mariner and the pirate pub “Jolly Roger” was constructed on the site of the well. Captain Hugo created its charter, wrote an anthem and began to welcome whoever wished to join his merry crew. Friends and strangers would visit the old captain to sit in the underground ship hold, drink beer and eat sausages while listening to his pirate stories. Sadly, Captain Hugo is no longer with us, but his crew still gathers, and they always participate in the April 1st festival so beloved by the city.

This dvorik is situated in Moldavanka. At one time, this area of the city was considered the heart of criminal life in Odessa, but today it is very peaceful. The dvoriki of Moldavanka, and especially their inhabitants, preserve the spirit of Old Odessa more than do many others. It is no accident that in many films about Odessa, directors choose to film the dvoriki in this neighborhood. For example, the popular television series “Liquidation” about post-War Odessa was filmed in the dvor at 21 Kolontaevska Street. Even if you have not seen the television series chronicling the adventures of criminal investigator David Gotsman, you should stop by this dvorik. It has witnessed cinematic magic!