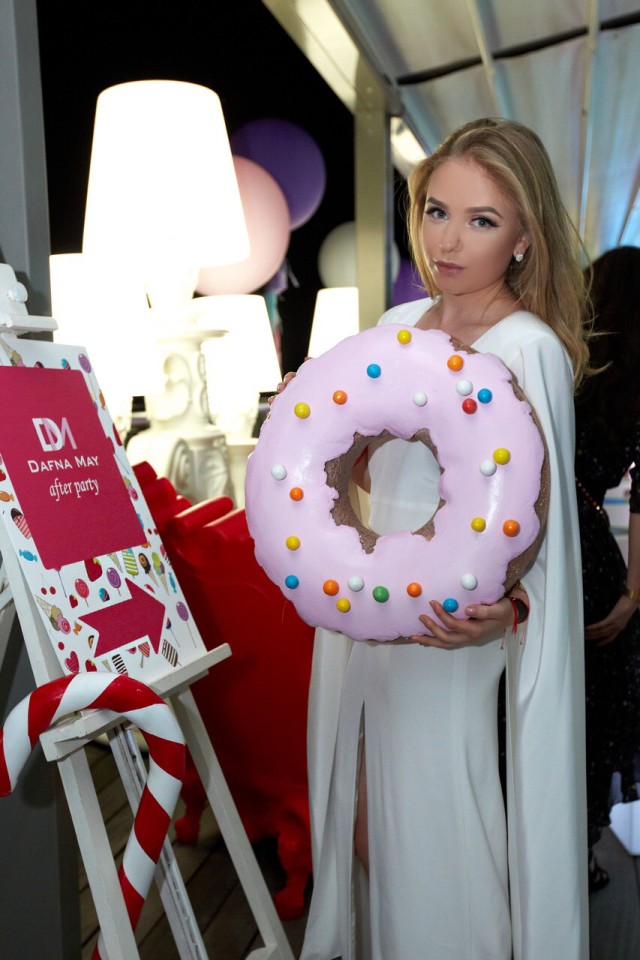 It is a widely accepted belief, that an artist’s work gains depth and becomes enriched through greater variety and complexity of the artist’s experiences. It is no secret that some of Ukraine’s greatest artists have had complex and multilayered identities The more layers there are to the background, the more aspects there will be to the art work. For a fashion designer, diverse ethnic and cultural influences are especially instrumental in bringing metaphorical and literal texture into the designs. This is something to very much bear in mind when thinking about the work of twenty five year old Israeli-Ukrainian designer Dafna Mayberg, who is considered by fashion critics to be the most promising new Ukrainian designer to make her stage premiere this year.

Despite her relatively young age, Dafna Mayberg, also known by her design name of Dafna May, is quite familiar with the world’s complexity. Born in Haifa, Israel to Jewish-Ukrainian parents, she grew up in Israel until the family moved returned to Kyiv when she was 13 for the sake of her father’s business interests. Though Dafna grew up speaking Russian at home, the children of any diaspora will be quickly explain that is not quite the same as growing up in a language environment. The difficulty of adjusting to a new language and a new country was compounded by the fact that Dafna is also dyslexic — something for which the Ukrainian educational system of the time (it has improved only slightly since) was not able to provide adequate support. After attending the Kyiv International School for two years, it became clear to Dafna and her parents that moving abroad would allow her to receive a quality education in an environment that she would be more comfortable in. And so, even though she came from a tightly knit family that preferred always to stay together, at 15 she moved yet again. This time to London.

It was around that same time that she was asked at her new school what she might want to do with her future. After giving it a bit of thought she began thinking about a career in the arts. She had always loved to draw and to create images and the choice seemed easy enough. After three years and classes in graphic design, art, history and photography, she graduated and made a final decision to become a designer. 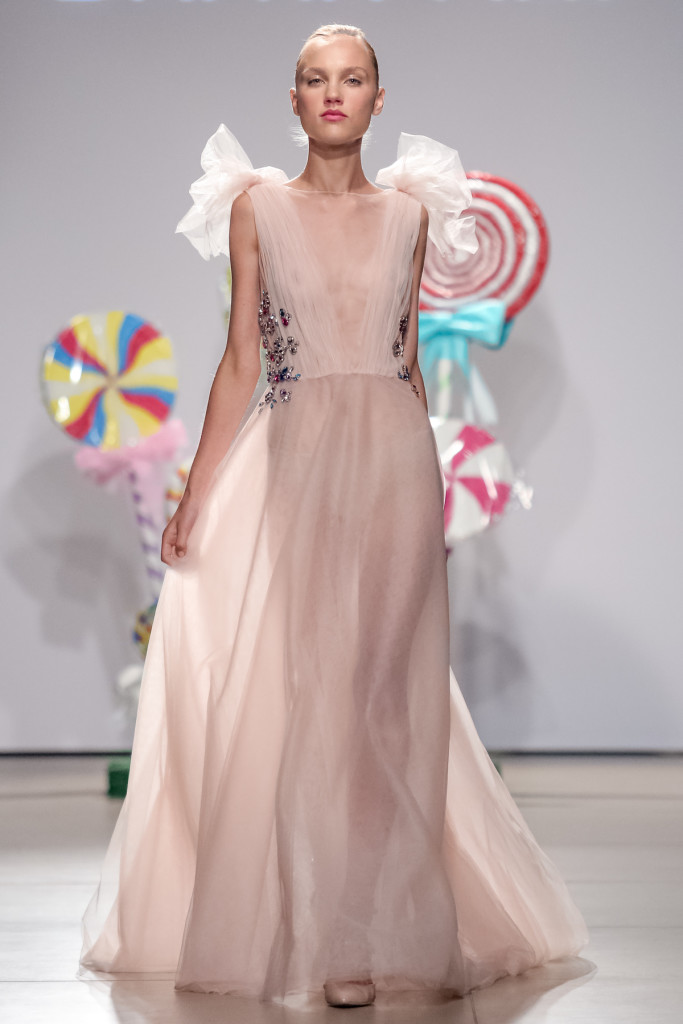 She chose to attend the American University (now, Regent’s American College) in London. She recalls the next four years as an amazing experience. A heady time of meeting fascinating new people and learning a great deal about design, from hand sewing her own creations, to planning a full collection and discovering where she would find the most inspiration. The city of London as even a casual visitor well knows is itself is an incomparable teacher: bustling with thousands of fashion and arts events, and founded on the atmosphere of effortless elegance that has inspired so many eminent designers throughout history.

Dafna’s dyslexia continued to be a serious challenge, but through her dedication to the art and the determined belief of her teachers, she was able to overcome the obstacles. In fact, the struggle endowed her with a sincere tolerance of human qualities and a faith in her own value as an artist, which are hard to come by if one is never faced with such a personal hurdle. Above all else, she discovered first hand how important it is to acknowledge the difficulties she has gone through, and at the same time to recognize how lucky she is to have had the opportunities that made her the designer she is today.

The Mercedes Benz Kiev Fashion Days in September marked a huge milestone in Dafna May’s life and career – the designer’s very first fashion show. Put together in just one month (with the collection itself being created in only two months), it was a hectic and nerve-wracking undertaking. The stage decorations were brought overnight from Lviv at the last moment, and working with local staff was an occasionally jarring experience of culture shock for the mostly Haifa- and London-raised designer. On the day of the show, Dafna was so nervous backstage, that she could only be prevailed upon to come out for a little peek and a round of applause at the end of the showing. But the young designer recognizes that this is par for the course in her difficult and competitive profession, and she would not be the first young artist in history to garner excitement from the adrenalin rush. The show was an exhausting marathon, and yet when meeting the Odessa Review’s editorial staff for a tea just a few days later, she was brimming with plans for the future. 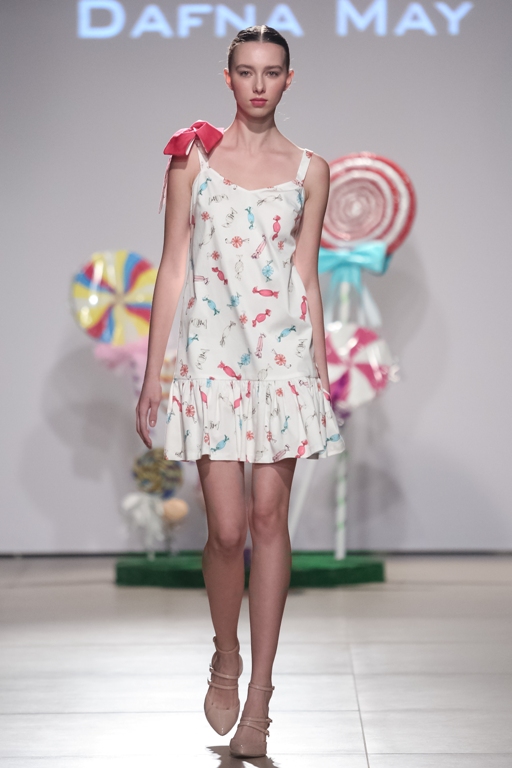 Dafna chose to name her first collection “Sweet 16,” a reference to both the year of it’s founding, as well as a pean to a universalized spirit of celebration of young femininity. The collection featured the sorts of dresses one would wear to a sweet 16 party or debutante’s ball. Floaty dresses with quirky details cut from gentle fabrics and covered with candy patterns that evoke a lighthearted sensuality. These are dressed for a girl who is aware of all the pitfalls that young womanhood entails, but is ready to face them and rises to the challenges joyfully. Yet Dafna is adamant in her refusal to be limited by a specific client profile or age bracket. She believes that a woman must have the freedom to approach her age and express herself in the way that she most feels comfortable.

While Dafna gives out her dresses to her friends and has been happy with the positive feedback to the first collection, she freely admits that she draws the most aesthetic inspiration from the example of her mother, who as attendees of the more than keeps up with Dafna’s contemporaries in terms of style and fashion sense. Indeed, the designer is a fan of timeless feminine style. Asked whom of the style icons she would choose to dress she does not need to think long to answer that she is drawn to Monica Bellucci, Grace Kelly and Lady Diana. She admires the designs of Dolce & Gabbana for the way their tailoring highlights the intrinsic perfection of a woman’s curves. There is nothing bad in having a classicist streak after all.

Still, being young and cosmopolitan, she tries to keep her mind always open, enjoying the creations of different design houses every season, and paying special attention to new designers with a fresh and forward looking approach. The same kind of artistic freedom applies when she is asked to define herself as a Ukrainian designer — she is reluctant to do so, for understandable reasons. She would like to be known in her homeland, Israel, and would consider herself an Israeli designer because of her upbringing. She was educated in London, living there for a large portion of her life, and would naturally also love to be considered a London designer some day. Despite her dyslexia, she speaks three different languages on a daily basis (Hebrew with her father, Russian with her mother, and English everywhere else). Today, she is a Ukrainian designer, because of an intrinsic pride in her roots and because of the inspiration she draws from the life of contemporary Ukraine. 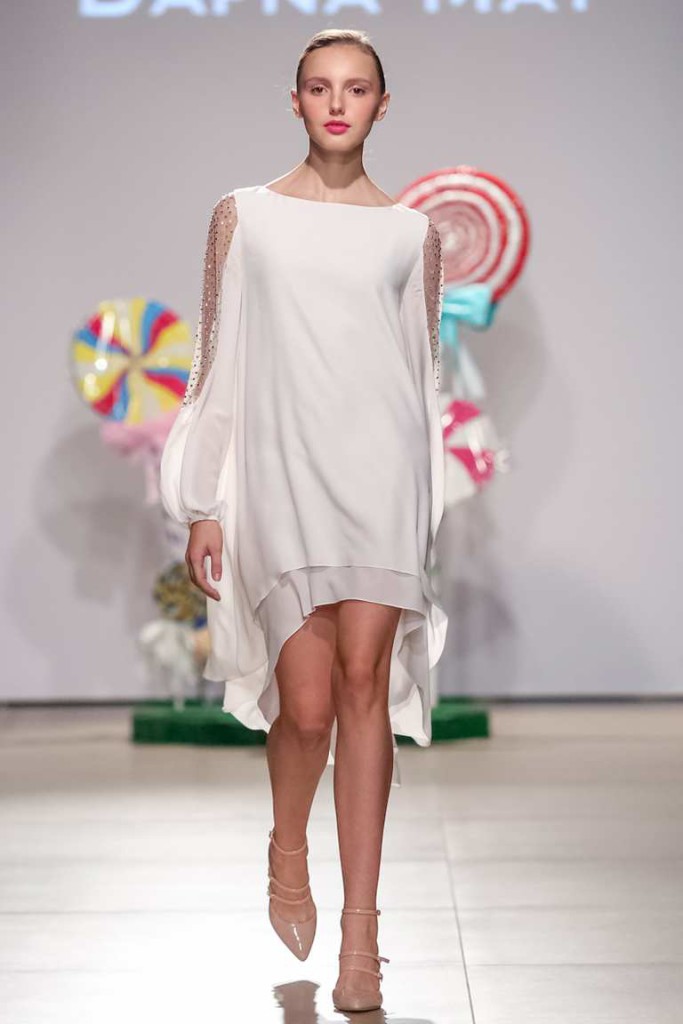 “I think I can call myself an international designer, but not only a Ukrainian designer. I would love to be called an English designer, a designer from London, that’s my dream. But I’m very proud of having started in Ukraine, I want to support this country because I think it’s a great country and it’s developing a lot” she explains if one is brash enough to ask her to categorize herself.

Dafna would not be the only one to believe that whatever the social and political shortcomings of this country might be, it is experiencing a renaissance of arts and fashion which showcases levels of talent that are astonishing considering the relative lack of educational opportunities.

Speaking about her “Sweet 16” collection, Dafna wondered if it might be the time for Ukraine, after two years of conflict and crisis, to graduate into “adulthood,” and turn its face, joyfully, to the new opportunities and challenges ahead. Perhaps the crisis helped alert the Ukrainian public to the necessity of change, awakening a sense of artistic and civic responsibility she wonders. Dafna herself considers becoming an activist for certain social issues in Ukraine, such as the cause of advancing equal opportunity education for children with learning disabilities such as her own. She speaks about that issue and the negative aftereffects of antiquated Soviet pedagogical methods quite passionately.

The Dafna May journey is at it’s very start. At the moment, the brand is Dafna’s “baby,” and she still gets butterflies in her stomach every time she sees her newly minted creations being worn in the real world by real women. Nevertheless, she has very defined ambitions and plans for expanding the brand, the first of which is to open a dedicated showroom in Kyiv. Like every other bright and talented young designer she also hopes to someday have showrooms in London, Milan, and New York. The opportunity to showcase her work in a showroom in Paris at the end of September will be followed by a showcase in Milan, which will undoubtedly take her closer to the goals she has set for herself. Meanwhile, her first foray into the fashion industry was just as it should be for a young designer — girly, nervous, strong, sensual and unrestrained by categorization. A little bit off kilter but full of infinite promise. Let’s hope that we will see Dafna May developing these qualities in her diverse and affirming way during the fashion seasons to come.