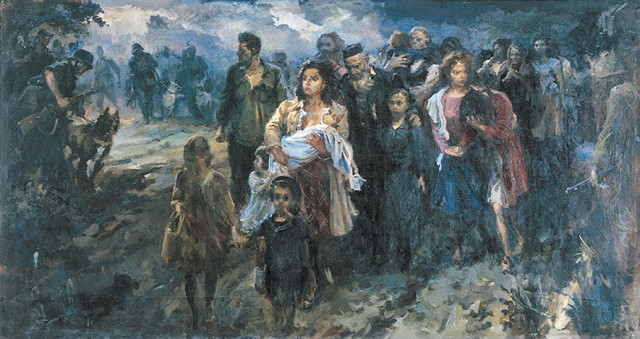 In memory of Deborah Feinshtein

The field has a covering of dust.

There is spurred rye on the path. Burdock.

The angry thickets of destruction.

Neither walls. Nor houses. Nor graves.

The crooked teeth of metal,

And my streams of recollection

Give me your hand. Give a hand.

We will walk over the burned ruins together

In illumination, in torture, in suffering,

In a wave of anxiety pierced by flame.

Give me your hand, phantom,

Give me your thin hand

On the burned ruins of Uman.

Here you are, standing by me,

Gazing at the path you took.

You have not changed at all

After all these forty-eight years.

Give me your hand. Through you

I see hills and ravines –

And my mother, and your rebbe

Come to us from above,

Gazing into the distance.

Give me your hand. Give me a hand, dead one!

Give me your living hand –

You reached out to us with it,

Falling onto the grass,

Dying in the ravine.

I take your hand,

And together we walk again

On the ancient highway, trodden for centuries,

And again I read on your pale lips

The slow verses of old poems.

Thoughts with long arms, those ruthless

Run quickly through the years,

Over the trampled continent.

On a funeral bier they carry

Come out, Deborah, my phantom,

Onto the path that is not phantasmic or vain.

Stumbling in the ditches,

Tangled in the clods of earth,

By the hard prickles

And dirt, and piles of waste metal,

And visions of synagogues,

And past the old church,

With icons in silver dress,

And past the church yard,

Where by the well used by the haidamakas,

Sunken into the mouldy, sticky clay,

Still smoulder the fragments and brittle

Past the flames of the haidamaka uprisings,

Past the spears covered in blood,

Stuck into the square by the cloister,

So that people pierced, convulsed, killed,

Would roar from there through the whole town.

Above the hubbub of ancient public squares,

Above the lamentation of recent ruins.

Mad carriers of the clamouring dead!

Place by the white chapel vault

Your black bier, your remains.

And then let the flames engulf the decay,

Let a miracle happen – and the light strike,

And a recollection, like Lazarus, having overturned the bier,

Will rise above the years, the walls, the clouds.

Deborah! Be the first to enter my recollections –

The sounds of your steps can still be heard there,

The knocking of your wooden shoes,

The enduring echoing of your piano,

When you spread your thin hands

To masterfully touch the elastic cord.

You play and celebrate, dominate and praise

And the music flies high,

Searching for unknown octaves on the keys …

This is how it was. In an old monastery,

In the white walls of the Roman Catholic church,

Where the cross still hung

And audacious swallows made their nests,

And with painted curtain rags

And the tired, severe voice of Gonta,

And Macbeth, marked by the apparition of wailing witches,

Continued to echo here every evening

And the First Cavalry applauded them.

And before the grey-blue twilight fell,

When Kurbas the master stayed behind

With a group of ragged youths, with us,

To work on bustling mimes,

On the efforts of rough pantomimes,

Then, Deborah, you tried

To help us with your play.

And Kurbas glanced at you kindly.

Throwing back a lock of hair,

He said “bravo!” as though in passing,

“Who is your teacher? You can play, girl.”

Both overjoyed and saddened,

Unhappy and at the same time aglow and beautiful,

Having early tasted the bitterness of devotion.

Who taught you? To this day I remember

A yarmolka on thinning hair,

A face yellowed, faded and mournful,

And those chords, rigorous, hundred-voiced,

When the right-hand touched the keys –

He lived in the singing world of ancient alarms,

Your father, the synagogue’s cantor.

Sang in him everywhere and always.

It was singular, common, inseparable –

The harmonic weave of the harmonies of the Baal-Shem

And the dreamy psalms of Skovoroda,

To extol faith in the human that was hidden

In every note, as in the world’s every drop.

To you, Deborah, your father gave this world —

The melodies and songs of both his peoples,

Of those composed by the Levite in the tabernacle,

And those sung by the blind kobzar in the steppe.

He sang Kol-Nidre and afterwards

And you were in both.

Your sorrowful father taught you

Harmony. He taught, as best he could,

Both mournful tones of the synagogue

And quiet songs about flying snows

Falling on the white breast of the dead

With a trembling, parting sigh.

In this way secretly your father taught you

The essence of beauty: thirst and grief.

He was not talkative, the old Jew.

The poor man taught his daughter

To search for strength in music, to hide in the darkness of one’s eyes

The fear of life and isolation.

The souls of these quiet, reserved people

Carefully concealed the storm’s abyss within,

But it revealed itself in music,

Tearing from the depths all its sunken treasures.

At the time I could not grasp the reasons

For their loneliness, pain and secrets.

The mind of an immature boy

Could not see what they concealed,

Could not penetrate those depths of the human heart

Where lie dead layers of fury and calm.

I wanted to understand, but I did not hear

About your terrible story, Deborah, until later …

On the cobbles covered in broken glass and feathers

And pointed in all directions the machine gun

Clasped in his muscular arms.

In the square he appeared angry, red-eyed:

How long do I have to wait? How long?!

Grab at least one and bring him!”

The orderly ran to smash the nearest door.

Meanwhile in the market place all the lines

Had been inspected by the angrily wheezing Stetsiura,

A wrestler and heavy-weight champion.

A year ago his stocky figure

Looked out from a poster in this same market place.

Let the enemy now observe his

And his chieftain status.

However, the ambitious chieftain

Cannot stand this emptiness and silence:

“Dance, foreigners! To the public square!

Smash the doors! Pass me the cord,

Hang the rope around the old man’s neck.

In vain he hid from us his Rachele or Roza

Behind a cupboard in the corner.

Has fear confused you? Can’t you stand?

A blow. Father! A cry. A violent jerk.

How the darkness howls! How unbearably nauseating it is!

No death. Or life. No way to heal

Flesh – into something disgusting, wild fear – into shame.

Looking into your own bottomless night.

Father, too, turned silent. He inexpertly to act,

Avoided looking people in the face,

And did not light a candle in the candle holder,

And did not visit the synagogue.

Like a death noose, a cry gripped his throat –

Where to find the capacity for song and hope? …

Days went by like this. The year twenty arrived

In storms and iron, in the move of powerful armies,

And through Uman flowed lines

In the forceful march of Budionny’s divisions.

Every evening Kurbas’s theatre lit for them

The fire of Shevchenko’s prophetic visions

So that the hearts of soldiers would burn in anger,

As though by the embers of bivouac bonfires.

How time rushes, and calls, and disappears,

Embraced by the impulse of victory.

He heard everything, he also knew everything about you,

About you and your father, and your suffering

He perceived as his own, and he was shaken

By this pain without limit and this cry without sound,

And reached out a sensitive and careful hand

To hearts swooning in silence.

When and where your father met

Kurbas, neither you nor I know,

But your father’s amazing decision

Filled you with limitless wonder.

He returned one evening,

Sat in silence and suddenly said: “Let us play.”

He pulled the bench up to the piano,

Took something out of dusty pile of notes

And a chord of weakened strings resounded

And the quiet of the hovels was broken.

Father said: “I was approached

By the main one from that Kyiv group.

He asked me after long introductions

For you to be his pianist.

Whether you will take up music again

I do not know, so I promised nothing,

But I can no longer stand

I would agree. Would you agree? …”

Under the roof of the former church

While reflections, azure and green,

Like November, fell to the floor from the walls,

Splashed in flashes on the golden stage.

Of autumn, and sawdust, and straw,

That could barely keep pace

With the quickly racing scales.

And these young men and women

With their own creativity, sweet and intoxicating,

That their own bodies

To its ruthless power,

Could be moved by the rhythms,

These hearts were ready to surrender.

This is how a young man’s body is cut open

By one total spasm,

The dazzling shriek of love.

Of the goal, beauty and truth –

In this hungry and yellowed Uman,

But even if poor and disheveled

With such a yearning for joy!

You played for them.

From under pale fingers

And the flood of Lysenko’s stormy melodies,

And those drawn-out sounds of the steppe and wilderness,

Rocked by the wind of Palestine.

For you this was not a forgetting –

Giving yourself up to music,

Beyond the short-lived surface of mime dramas

Into the hidden depths of real dramas

Without any forced pathos or sham acting.

And frames were torn down,

The world was filled with music,

Reached out to us their

Until that evening, when your inspired music

To heights of incomprehensible

Called this our dance,

A red refrain over unbridled space,

A maturing of hearts.

But it’s a skirmish too.

March thunder swept away the discord.

A new burst of revolution,

The sky is full of salvos, red fires, storms.

A purple expanse opens up.

Cuts into the ground,

A plough into the ground.

The first strip has been ploughed.

Peoples are not enemy.

With all the power of our impulses and inspiration,

With song, with music …

And together were moved by the spring impulse,

And we played with poetry,

As with a blade, a muscle,

And we were intoxicated by words,

As though by the wind, by hops,

I have not forgotten this.

And here I stand over the black-mouthed ravine,

And call your shadow

Soundlessly, in an inexpressible language,

To conversation with me.

Even now on the grey dust,

On the spurred rye, the rubbish, the burdocks,

The tracks of women and children can be seen,

And I envision a crowd of bare bodies.

You walk among them,

And the whisper of your feet fades,

And there is silence,

And the harsh whistle of an SS man,

And the grey slope of the ravine is crossed

By the rapid strike

Above the screaming ravine,

From where the death rattle comes,

The crushing and crunching of bones.

For all the suffering,

For all the torture

A prophetess of the killed.

You, too, fell among the shaking bodies.

I picked up a handful.

Maybe, I am holding your ashes

Carefully in my outstretched arms?

Oh, how the dust cries out in my heavy palms!

Pushed up and shone

In the ravine, on the crumbling bottom.

I looked closely. It seemed to me:

It had grown out of your essence.

And you gave it

This reaching for the sun,

This thirst for warmth,

The desire for light, music and beauty.