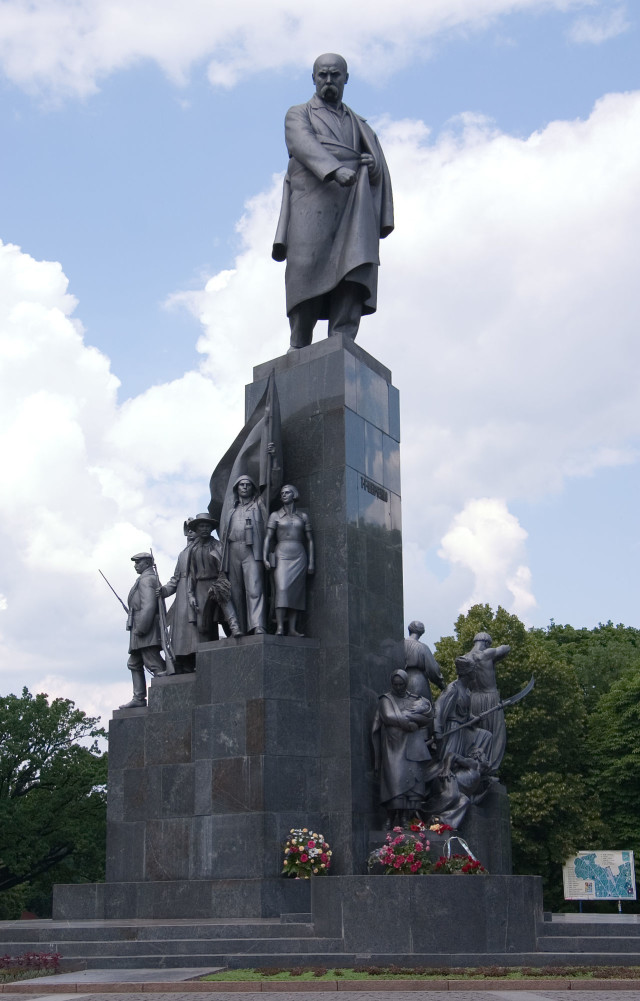 The remarkable poet and artist who is considered to be the father of the modern Ukrainian nation means different things to different people. It is precisely because he is such a well-known symbol, that his historical legacy and place within the pantheon will have to be reconsidered in the process of Ukrainian Decommunization. Contemporary Ukraine needs a new and fresh relationship with the work and identity of its founding poet.

Shevchenko was well-known for his resilience in life – he survived serfdom, Tzarist exile, Soviet censorship, and oblivion – and without him Ukrainian culture as we know it would not exist today.

His posthumous life as cultural symbol turns out to posses a similar hardiness. In his post-Soviet existence Taras Shevchenko cuts a striking figure, one that has genuine traction both with the Ukrainian establishment and the people – at home and abroad in diaspora communities.

In 2013, Euromaidan protesters called upon Shevchenko’s image, emblazoned on shields, helmets, bulletproof jackets, graffiti buildings, and the Ukrainian soldiers who serve at the front now are issued with a miniature camouflaged copy of the ‘Kobzar’, the poetry collection that defined Shevchenko’s literary legacy. Since the annexation of the Crimea, monuments to Shevchenko in Sebastopol and, subsequently, Donetsk and Luhansk have become sites of contestation. Russian authorities also destroyed Shevchenko’s former house in Orenburg, Russia. The war of symbols continues. And yet, what meaning do contemporary Ukrainians attribute to the ‘father of the nation’?

The Soviet regime has left a plethora of Gordian knots knitted into the fabric of Ukraine’s national fiber , but a pervasive suppression of critical thinking skills in the service of particular critical positions is one of the most perverse ills of the transition to a Post-Soviet society. The reluctance to critically engage with the legacy of figures whose importance has been widely acknowledged during the Soviet period – whether Karl Marx, Vladimir Lenin, or indeed Taras Shevchenko – has meant that both the ‘enemies’ and the ‘heroes’ of the Ukrainian nation are often little more than abstract symbols. To forge ahead, Ukrainian must imbue these symbols with meaning, and to reappraise them on their own merits.

A Life Against the Odds

The short yet vigorous life of Taras Hryhorovych Shevchenko is well documented. Born into a peasant family in the Ukrainian village of Moryntsi on March 9, 1814, He was orphaned at the age of 12 and spent his early life in hard servitude to a nobleman in Vilnius and afterward in St Petersburg. He was liberated from serfdom at 24 by friends and patrons who recognized his colossal artistic talents – among them was Karl Bryullov, a key figure in Russian painting, who is best-known for his ‘Last Day of Pompeii’ (1830-1833). Initially an autodidact, Shevchenko became a Master Engraver at the St Petersburg Academy of Fine Arts, creating around 1200 artworks in his lifetime as well as forging a literary legacy credited with establishing the modern Ukrainian language and literature. Interestingly, he only visited Ukraine three times after his birth, in 1843, 1845, an 1846. As a poet of the Romantic tradition, Shevchenko used folk-song elements and archetypes to convey the salient themes of Ukrainian national culture: motherhood, a love of freedom, loneliness, separation, sadness, and a longing for justice and happiness. A dissident in imperialist Russia who wrote anti-Tzarist satirical poetry in the ‘peasant language’, he was sentenced to exile in a remote Kazakh outpost and banned from writing or drawing. He managed to continue producing work however, which he hid in his shoes, work which became known as his so-called ‘bootleg booklets’. He died at 47 in St. Petersburg, unmarried and childless, a man whose body had been broken by years of abuse and ill health. He was later reburied on the Chernecha Hora near Kaniv, a major site of visitation. He achieved prominence in his lifetime and laid the foundations for a glory that reached far beyond the grave, he is credited with formulating the call for Ukrainian national liberation and for distilling the quintessence of Ukrainian cultural identity for all subsequent generations of Ukrainians. 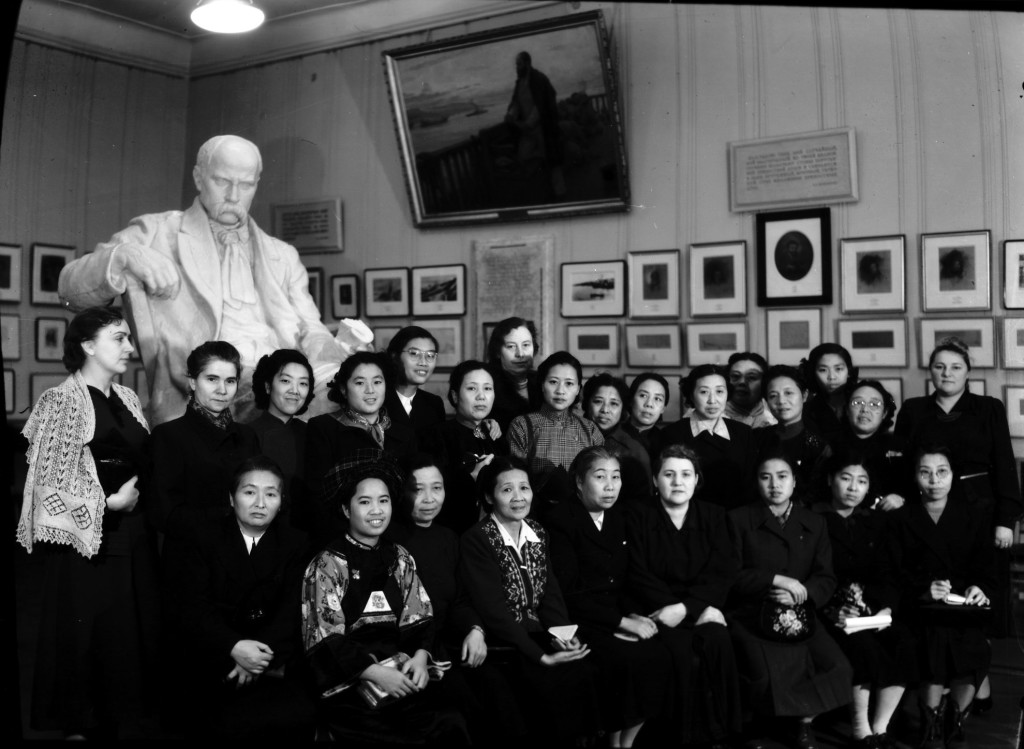 The Soviet government recognized Shevchenko’s unifying appeal and the strong nationalist sentiment encoded in his works and image, and so chose to hide him in plain sight. Much like the Roman imperial generals who brought back with them the idols of captured peoples to be worshipped in Roman pantheon, the revolutionary authorities welcomed the sombre moustachioed Ukrainian into the Soviet canon. Shevchenko was hailed as a ‘humanist’, ‘atheist’, and ‘anti-Imperialist’ revolutionary poet and painter, a reluctant member of the enlightened cultural elite whose sentiments were with the peasantry and proletariat that struggled under the Tzarist imperial yoke. While the 1930’s saw a brief period of meaningful study and critical reappraisal of Shevchenko in the USSR, the Stalinist terror that followed cut short any such initiatives.

Shevchenko’s works went through a long period of systematic falsification, published in abridged and amended form, honed by Soviet spin doctors to fit the procrustean demands of the Socialist Realist method, and called upon to compliment, rather than challenge, Communist state ideology. Edmund Griffiths at the University of Oxford explained: ‘Shevchenko’s acceptability as part of the Soviet canon, together with his presentation as the Ukrainian writer, probably made him seem less rather than more interesting to generations of British students of Slavonic literatures.’ Thus, the Shevchenko bomb was temporarily defused. Ironically, this newly sanctioned veneration made Shevchenko a captive of another oppressive foreign regime. His likeness featured in Soviet monumental propaganda, and was not limited to the territory of the Ukrainian Soviet Socialist Republic. Russian sculptor Matvey Manizer’s hulking Stalinist baroque depiction of Taras Shevchenko, completed in 1935 in the University Gardens of Kharkiv, is perhaps the most effective visual embodiment of the Soviet conception of the visionary Ukrainian. It shows the older Shevchenko on a pedestal, encircled by an upward procession of the characters of his works.  In 1939, the Kyiv National University was named after Taras Shevchenko, one of many state institutions which would carry the Ukrainian name to the present day. In 1964, on the 150th anniversary of his birth, a monument to Shevchenko was erected in Moscow – with another rising in Washington D.C.! Thus Shevchenko also inspired resistance to the Soviet political system in Ukraine, and was a powerful national symbol for the Ukrainian diaspora abroad. Today, there are over 1300 monuments to Shevchenko found all over the world.

The Taras Shevchenko National Museum, which first opened its doors to visitors in 1949, has been entrusted with safeguarding the original paintings and drawings, poem manuscripts and their initial published editions, as well as the personal belongings of the poet. Located in a former palace owned by Mykola Tereshchenko, a famous fin de siècle sugar industrialist and arts patron, now completed by a modern white cube extension, the museum seeks to reinvent itself with a newfound urgency. The Museum’s Chief Custodian Yulia Shilenko suggests that most Ukrainians perceive their national bard with an apathetic disinterest reserved for other iconic figures, elevated on a pedestal and far removed from the contemporary concerns of a digitalized modernity. This is why she has played a pivotal role in developing a series of international projects, which seek to write Shevchenko’s legacy into a global cultural context. Currently on display is the Ukrainian-Spanish project ‘Kindred Spirits: Francisco de Goya. Taras Shevchenko. Carlos Garcia Lahoz’, which brings together the graphic work of Shevchenko and Goya, and the sculpture of a contemporary Spanish artist, a native of Goya’s Zaragoza. In 2016, Shilenko and her Chinese counterpart Alan Yu spearheaded a landmark series of art exchanges between Ukraine and China, including the exhibition project ‘Unfading Glory. In Honor of Taras Shevchenko’. This exchange culminated with the opening of the Taras Shevchenko Museum in Beijing, the first such institution of its kind to be fully funded by a foreign government – rather than the Ukrainian state or diaspora. The project was the largest joint cultural project between Ukraine and China since the Sino-Soviet split. It is a return to historical connections however as it is well-documented that between 1949 and 1960, the museum hosted numerous Chinese delegations, which came to honor the ‘poet of oppressed peoples’, who was well known and venerated by the Communist establishment of the People’s Republic of China. Li Geng, the Director of the Li Keran Memorial Complex, is hopeful that the Taras Shevchenko Museum in Beijing will serve as a platform for future exhibitions of Ukrainian art, and that original artworks by Ukrainian artists will compliment the current collection, which consists of paintings and calligraphy created during the 2015-2016 exchange, as well as over 100 reproductions of Shevchenko’s graphic works. During a press conference in Kyiv, Li Geng recalled the affection that many members of his generation felt towards the Soviet Union, so while his generation remains in power, it may be imprudent to wholly write off Ukraine’s Soviet legacy while devising a cultural-diplomatic strategy for region.

Ukraine’s independence may have thrown off the yoke of Soviet censorship, but to counter Soviet apathy, a willful effort is required on the part of every Ukrainian. A serious effort to acquaint themselves with the cultural legacy of its great men and women, both famous and unknown. The mimetic shorthand so characteristic of our digital age reduces cultural icons to exactly that – icons, approximations, codes. To decommunize Shevchenko, we must penetrate the surface and discover the works behind the man, and to make sense of them in our present context. Taras Shevchenko’s works were inspired by the unique challenges presented before the existence of a unified Ukrainian nation, in a time when many Ukrainians were forced into a life that was barely human: a life of serfdom, poverty, and injustice. Yet his writing is imbued with a transcendent humanity, the same sort of quality that made national poets of fellow Romantics such as Aleksander Pushkin, Adam Mickiewicz, Robert Burns, and Johann Wolfgang von Goethe. Ukraine is a country at war. It is a country in the midst of a profound economic, political, and social crisis where people are tormented by the loss of loved ones that continue to this very day. Though in many ways deepened, Ukraine’s identity crisis has also been arguably exacerbated since the Revolution of Dignity, and symbols which motivated to action and lifted the spirits in times of crisis must be imbued with new and relevant meaning. We can find clues in Ivan Marchuk’s remarkable surrealistic Shevchenkiana, a series of 42 paintings completed between 1982 and 1984, or Andriy Yermolenko’s pop-art depictions of Shevchenko as Superman, Elvis Presley, a biker, rockstar, and kozar. Perhaps the best way to honor the millenarian poet, the visionary Ukrainian, is to discover his works first-hand, and to seek in them a meaning at once personal and contemporary.