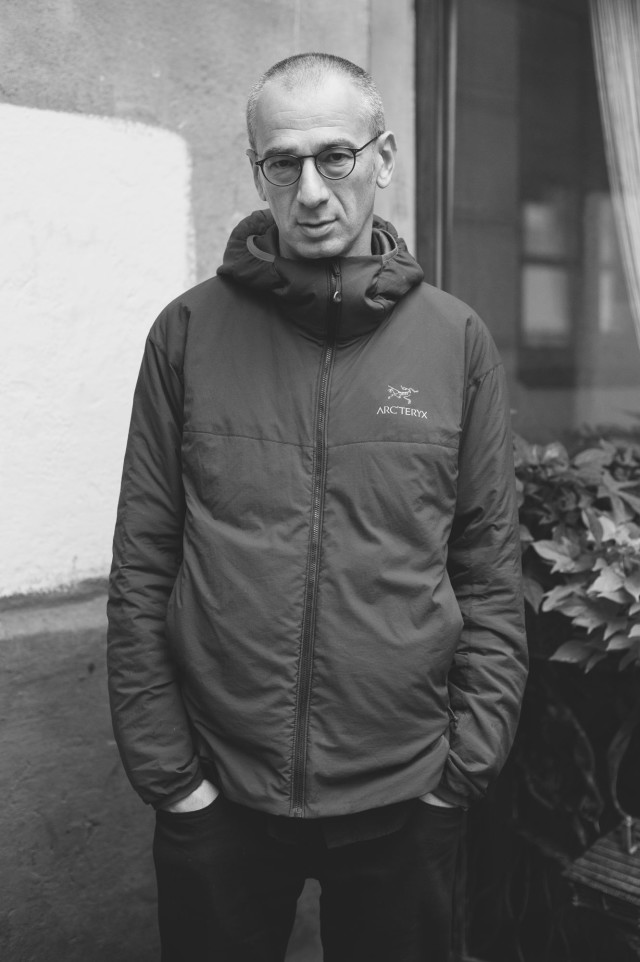 Eugene Ostashevsky is an American poet who was born in Leningrad into a family partially deriving from Odessa. He is now living in Berlin. His next book of poetry, “The Pirate Who Does Not Know the Value of Pi,” is forthcoming from the New York Review of Books in March, 2017. “The Life And Opinions Of DJ Spinoza” was first published by the Ugly Duckling Presse in New York in 2008 and quickly became a New York Poetry world classic. It reacts to the geometrical method of the Ethics of Benedict (or Baruch) Spinoza, a seventeenth-century Dutch philosopher, who sought to make his philosophy indubitable by constructing theorems upon notions he judged to be self-evident, after the form of Euclid’s Elements. The Odessa Review met with Ostashevsky during the Lviv Book Festival where he was presenting the newly translated Russian edition of the book.

It gives me great pleasure to appear in The Odessa Review. I’ve never been to Odessa but I’ve always wanted to go. My great grandparents are from Odessa and they died in Odessa in predictable circumstances, but I’ve never been back. In fact, coming to Lviv for the book festival is my first time in Ukraine ever since we emigrated when I was 10.

My book is called “The Life and Opinions of DJ Spinoza.” The first edition came out in Brooklyn in 2008. Now, the second bilingual edition came out with Russian translations by the Latvian poet Alexandr Zapol. It was published by Dmitriy Kuzmin as part of the literary project “Literature Without Borders” run out of Latvia. There is a number of books in Russian that they have published and there are a pair of books in translation. There is my book from the English and Serhiy Zhadan from the Ukrainian. It’s a literary project whose aim is to open up Russian and Ukrainian literature.

This is a book of poetry, except that there is a protagonist named DJ Spinoza. He has friends, enemies and frenemies including MC Squared, the Begriffin (which is a pun on griffin and begriff, which means “concept” in German), and a number of other characters.

I started writing the book in the year 2000 when I was teaching in Turkey. I just finished my PhD in comparative literature and I wanted to go somewhere exciting where I’ve never been, so I went to Turkey to teach. One night I was taking an extremely slow train from Ankara to Istanbul. I had a single compartment. I took Spinoza’s Ethics with me — one of the things that I worked on in graduate school was the relationship between mathematics, philosophy and literature in the 17th century.

Spinoza’s Ethics is written in a method which he calls “more geometrico,” which is an imitation of the way Euclid explains geometry. You are given the initial definitions and axioms, and then, using syllogisms and the law of non-contradiction you build theorems. The basic idea is that if the presuppositions are true, what you are creating is a set of true statements. They are true and universally provable: since they are logical everybody can check for themselves whether they work or not. It’s a kind of language that is superior to regular natural language like English, French, Dutch. What Spinoza tries to do, is to take this geometric language, which is “the” language to him for arriving at true statements, and build a philosophy where the results would be true. It’s part of the rationalist project. It is a kind of continuation of what Descartes starts, except it’s much more methodical.

When you open up Spinoza’s Ethics, it starts by giving you definitions and axioms, and almost immediately you start doing proofs concerning the nature of God using a mathematical language. I found this very funny, because of certain changes that have taken place since the time of Spinoza. Change number one: Spinoza has this idea that you can do math in a regular language (Latin in his case), but now human languages are too full of ambiguity, of ambivalence. They are very different from the idea of a mathematical language, where you are supposed to be able to exhaustively explain any concept. Change number two: he starts with axioms and definitions that have to be true and self evident to arrive at true statements. Euclid’s definitions and Euclid’s axioms were considered in the 17th century to be true statements of the nature of space. Since then, new geometries have appeared in the Romantic period — Gauss, Lobachevsky.

Suddenly, the thing that is absolutely true becomes only one way of talking among many. Instead of being a science of space, it becomes a logical mental game, it stops being about anything but itself. Besides, things that seem self-evident to Spinoza might not seem self evident to anyone else. The third change happened to logic in the 20th century with Kurt Gödel, and the whole concept of the axiomatic system became relativized. So, the Ethics are an attempt of a person sitting in a room to figure out completely indubitable, clear, universal truths about the nature of the world and the nature of God, using what he thinks is the only language for doing so. And then, 200-300 years later, it turns out that this language is just a game, it’s like any other language, relativizable.

It seems funny, and sad in a way, that now we’ll never arrive at truth, that was the reaction I had. At this point my friend Aleksey Parshikov was visiting me in New York, and he said why don’t you try writing poems about Spinoza. So I started writing and I came up with this character DJ Spinoza. It turned into something between poetry and a philosophical comic book: he fights different monsters, he talks to God, nothing ever quite works out. It’s weird, but it is poetry — it is about me, it is about emotions, but in the way that philosophy is about the person who speaks and the person’s emotions. It’s not direct. It’s very, very mediated by the language.

I write in English because I emigrated when I was 10 years old and I guess I’m an American poet. Although now I live in Berlin, and this year I’m working in Paris and commuting. I also lived in Florence — I work for New York University and usually teach History of Literature for their programs in Europe. Right now I’ve been living in Europe continuously for quite a while, and it’s hard for me. Because poets don’t write for themselves, in some ways they wind up representing classes of people.

I don’t know anymore whom I represent. I think there was one point in my life when I guess I represented “Russian immigrants in New York,” but I can’t really do that from Berlin. So now I represent only myself, and maybe that makes me not a poet. Because all that equipment from the 18th and the 19th century, the connection between the poet and the people, brings you to the question “who are my people?” I don’t know who my people are.

Right now there’s a funny convergence between Russian and American poetry, suddenly people turn towards history. In the States, it’s because of Ferguson and all the recent events with the police. People turn towards the legacy of slavery and try to deal with that in their poetry. Russian poetry has also turned to the history of the 20th century, to the blockades, the camps, the experience of Stalinism, the war experience. Zhadan is also, in many ways, a poet with a historical consciousness. I have a very developed historical consciousness, I just don’t know who my historical consciousness is of and for. I can’t really write in English about the Russian (by which I mean the former USSR) historical experience, which is closest to me. Somehow it doesn’t work in English, it becomes commodified in a way. But I can’t really write about it in Russian either, it’s not processed, it’s too raw.

My next book, which is coming out in New York in the spring of 2017, is called “The Pirate who Does Not Know the Value of Pi.” It’s about emigration and it’s about being bilingual, which in some ways is being no-lingual, cause you don’t have a language that is your own to the extent that you can actually believe it. It’s about all that, but once again as with “Spinoza,” it’s very mediated and very encoded. And like “Spinoza” it’s also funny, or I hope it’s funny. Maybe that’s my Odessa ancestors speaking through me.